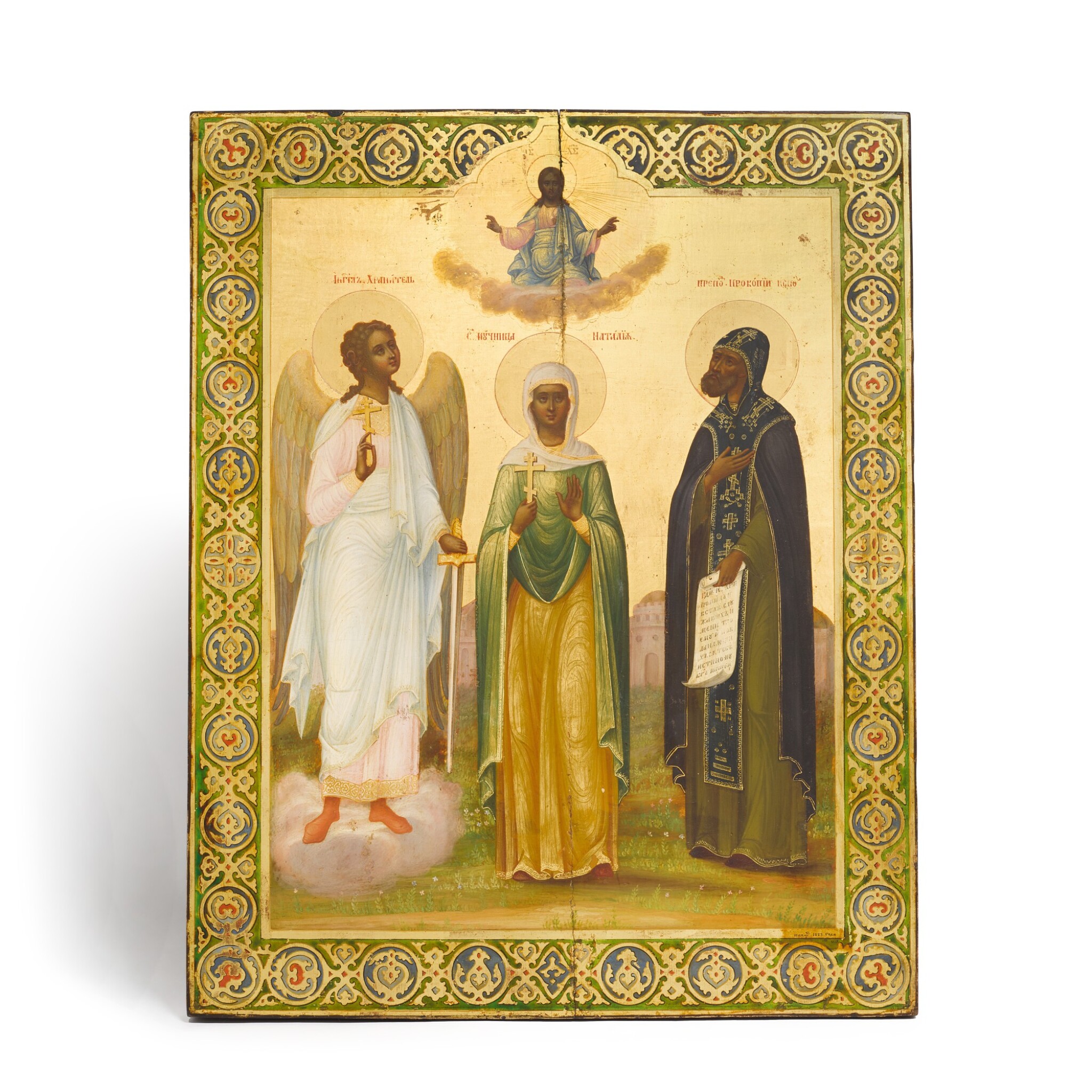 finely painted and gilded full length portrait depicting St Martyr Natalia flanked by an Archangel and Prokopii and surmounted by Christ, the border painted with a geometric pattern in green, blue and red over a gilded ground, dated and signed I YA in Cyrillic lower right corner

The icon is split down the center which is penetrated to the surface at the top and at the bottom. Otherwise, the painting generally in good condition but with wear consistent with age and some slight rubbing to the gilding.

The Peshekhonovs, Old Believers originally from Tver province, had been icon painters and restorers from the beginning of the 19th century. In 1856, V.M. Peshekhonov received the title of supplier to the Imperial court, as a result of his fulfilment of important Imperial commissions: during the ten previous years he had painted icons for all new-born babies of the Imperial family.

The activity of the Peshekhonov workshop and the flourishing of their style of icon painting, with which their name was associated, relates to the 1820s – 1880s. In addition to work for the Imperial family, the workshop under the direction of Vasilii Makarovich made more than 30 iconostases for monasteries and churches in Russia and abroad. Restoration work, iconostases for 17 churches in St. Petersburg, as well as the Samara, Saratov, Tver and St. Petersburg dioceses, the Cathedral of the Resurrection of Christ in Tokyo, the Trinity Cathedral of the Russian Spiritual Mission in Jerusalem, seven iconostases for the temples of the Valaam Monastery, as well as wall and icon cases are by no means a complete list of the workshop's activities.

The writer Nikolai Leskov, who repeatedly visited their workshop, had a great respect for Makariy Samsonovich, about whom he wrote in 'The Little Things of the Bishop's Life' and the article 'On Russian Icon Painting'.

Brought up in the mainstream of the Old Believer icon-painting tradition, the Peshekhonovs retained the severity and spiritual sophistication of this trend (contemporaries considered it 'Byzantine style'). Their works differed from the academic religious painting that prevailed in the first half of the 18th century, especially in the capital's churches. At the same time, the Peshekhonovs also went out of their way to accommodate new fashions, such as light-shadow modelling of the faces. However, their main 'innovation' was the completely golden background of the icon and the special decoration of the borders to simulate enamel, which gave the icon a 'rich' look, as if it actually had a precious setting, and saved their clients considerable expense.