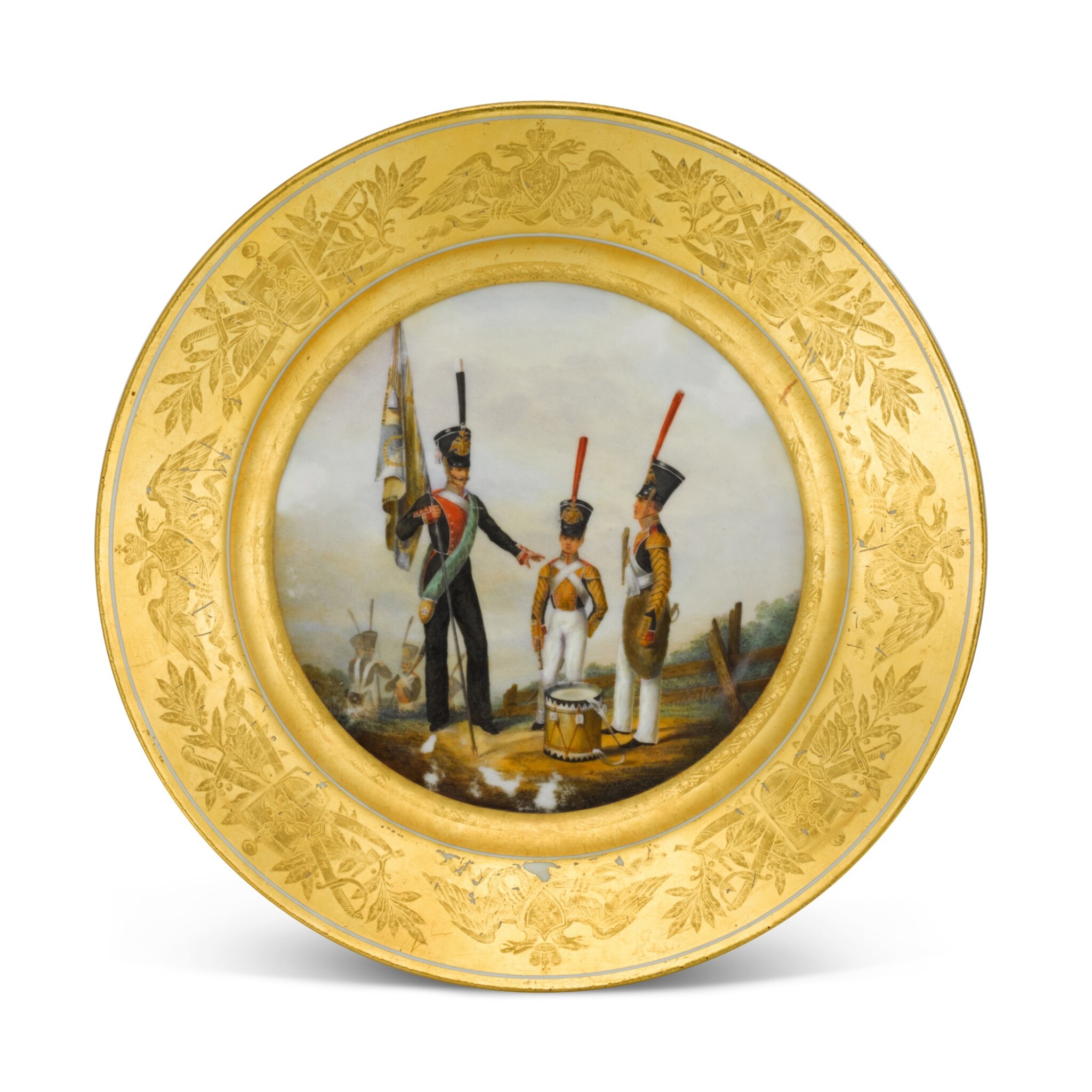 the cavetto depicting three soldiers standing in the foreground, one of whom wears the uniform of a Preobrazhensky officer and holds a flag, as well as four soldiers in the background, the border with gilt ciselé laurel wreaths, double-headed eagles, and trophies and helmets of the regiment, inscribed on the reverse 'Sous-Officier et Soldat du Rt. de la Garde de...' (final word rubbed off), with blue imperial cypher for Nicholas I, signed N. Artemev in Cyrillic, dated 1841

Good condition overall. Some scratches and chips to the gilt border, some wear to the edges of the painting

The Preobrazhensky Guard was renowned for being one of the oldest and most elite of all Imperial Russian Army Guards. It was officially created by Emperor Peter I in 1687. Its involvement in the Great Northern War (1700-1721), the Patriotic War (1812) and the Russo-Turkish War (1877-1878) earnt the Preobrazhensky its notable reputation. Later, it served as the main supporter and body-guard of Catherine the Great during her coup to usurp the throne from her husband Peter III.

From the 18th century, it was general practice that young male aristocrats were appointed to the Preobrazhensky Guard as a signifier of their and their family’s loyalty to the sovereign – some families even registered their sons with the Guard immediately after their birth. Eventually, it became tradition for members of the same family to serve in the same regiments within the Guard. Due to the elite status of its members, the Guard was especially entwined with the politics of the empire. Furthermore, members of the Preobrazhensky were notorious for both hosting and participating in wild parties, heavy drinking and gambling. Indeed, ‘it was not uncommon for the Guards officers to play cards all night and not sit down to dinner with champagne until five or six in the morning’ (A.S. Pushkin, Pikovaia Dama (The Queen of Spades), New York, 1944, p. 422).

The uniform of the Preobrazhensky was the same dark green of the Infantry of the Imperial Guard. It differed, however, in its addition of red facings within thin white piping. Soldiers bore the emperor’s monogram on their shoulder straps and officers on their epaulettes. The strip of material worn across the body and shown in the depiction of the officer here was known as a gorget. This feature was added to the uniform of officers in 1883 to pay tribute to the regiment’s overall distinction.