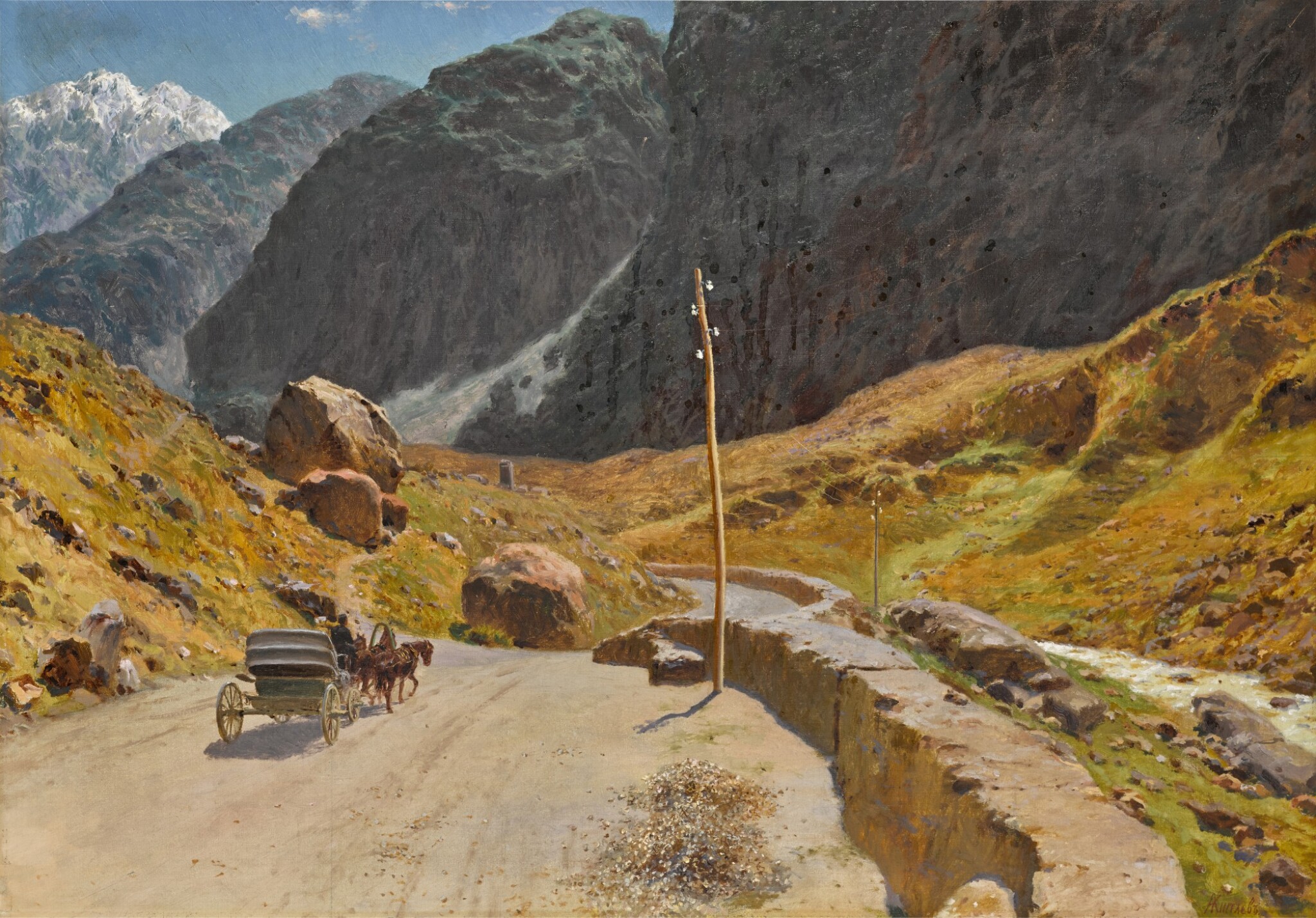 signed in Cyrillic and dated 1897 l.r.; further bearing the label of the 1914 Baltic Exhibition on the reverse

The canvas is unlined and is securely attached to the artist's original keyed wooden stretcher. This is providing an even and stable structural support. There is evidence of minor staining in the upper right corner of the canvas as viewed form the reverse.

The painting would therefore appear to be in good and stable condition and would benefit from cleaning, restoration and revarnishing.

The Georgian Military Highway connects Georgia and Russia and follows the traditional route used by invaders and traders throughout the ages. Acquiring its name from its use in the 18th and 19th centuries as the main route of transportation for troops to the region, the highway became synonymous with the Caucasian Wars. It was under constant repair in the early 19th century on the orders of Alexander I and by the 1870s it was a high quality road with several lanes and iron bridges over the torrents, a showcase of Russian engineering.

The present lot was acquired by Knut Henrik Littorin, one-time Norwegian consul to pre-revolutionary Moscow and ardent collector of Russian art. Persuaded to exhibit part of his collection at the Baltic Exhibition in Malmö in 1914, Littorin was unable to retrieve his paintings due to the outbreak of the First World War. Forced to flee Russia during the Revolution of 1917, legend has it that Littorin was able to leave Moscow in a horse-drawn carriage, swapping clothes with the coach driver en route. They were stopped by a patrol close to the Finnish border and the coach driver was executed but Littorin managed to escape to his native Sweden.

The composition featuring a lonesome figure pictured from the back amid a mighty landscape alludes to works by renowned German Romantic artist Caspar David Friedrich, including Wanderer Above the Sea of Fog (1818, Kunsthalle Hamburg) and Two Men Contemplating the Moon (1825, The Metropolitan Museum of Art). A recent exhibition Dreams of Freedom. Romanticism in Russia and Germany, a joint project by the Staatliche Kunstsammlungen Dresden and the State Tretyakov Gallery has shed light on close links between the two movements. Kiselev studied at the Imperial Academy of Arts and would have undoubtedly been exposed to Romantic influences, not least through his professor Sokrat Maksimovich Vorobiev (1817-1888), son of notable Romantic landscape painter Maksim Nikiforovich Vorobiev (1787-1855).

At the same time the present painting possesses several distinctly modernist elements. The road and the surrounding landscape are seen from an elevated position, the brushwork is livelier and more spontaneous, and there is a particular focus on the effect of light. Kiselev grants equal attention to the imposing grandeur of the mountains and the road and the telegraph poles, triumphs of modern engineering. The painting becomes a reflection on the ways in which the natural and the man-made coexist and interact with one another. In this aspect Georgian Military Highway also foreshadows the work of the German New Objectivity photographers of the 1920s, in particular Albert Renger-Patzsch (1897-1966). His photographs, renowned for their neutralised gaze, revealed ‘patterns of beauty and order in the natural and man-made alike’ (Tate Modern curatorial statement, 2014).