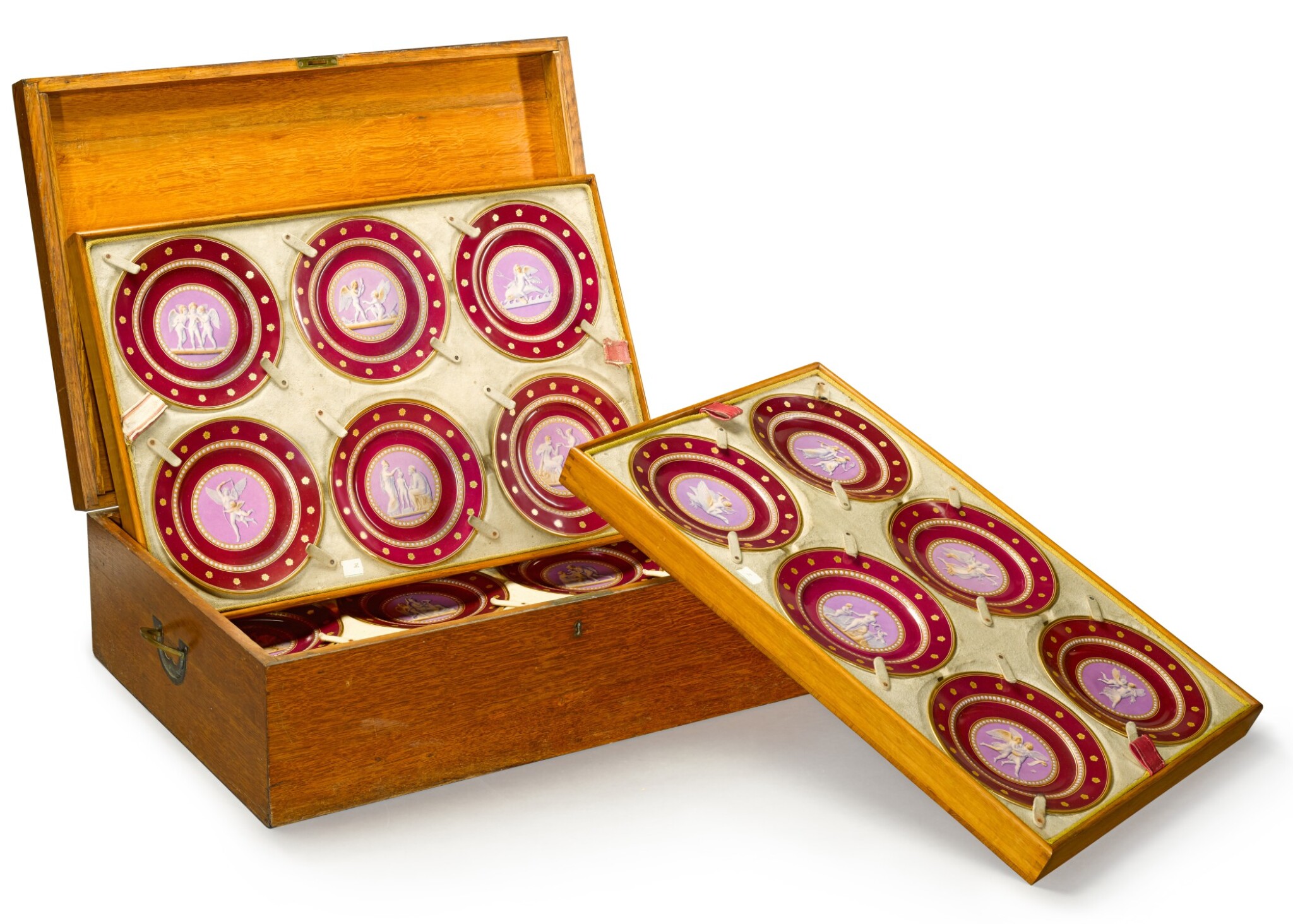 Of the eighteen plates: eleven are in generally good condition with very minor stacking wear. Four are in good condition but with more notable wear to the well so the white porcelain is visible in areas. Two are of good appearance but have faint cracks possibly just to the glaze and one is broken into seven sections between 4 and 7 o'clock with an associated crack and a small loss and old glue repair in need of restoration. The case lost three pieces of veneers inside that hide the clips that hide the monogram plaque. The top with a minor age slip, consistent with age and use. Otherwise with minor old marks, small residual white paint spots and scratches.

Presented by King Frederick VII of Denmark to Sir Andrew Buchanan, 1st Bart. (1807-1882), Envoy Extraordinary to the King of Denmark, in 1858;
Thence by descent to the present owner.

Two cased sets were presented to the Sir Andrew, inherited by different branches of the same family, the present lot, and one other which was offered Bonhams, London, Fine European Ceramics, 4 December 2019, lot 121 (sold £12,562 including premium).

In 1828, designer, Gustav Friedrich Hetsch (1788-1864) joined the Royal Copenhagen Manufactory as artistic director and his influential tenure had a profound effect on work being produced by the factory. The year after his appointment he visited the Berlin and Sèvres porcelain factories - an experience that was to prove fruitful. His aim was to emulate the quality of their work in Copenhagen and he made copious drawings of their designs on these visits. Hetsch's architectural background and a wealth of experience as a draughtsman developed a passion for neo-classicism. His training in Paris under the tutelage of the legendary Charles Percier, architect to Napoleon, led to important projects. This included the interior decoration of the rebuilt Christiansborg Palace in the new French Empire style. Crucially it gave him a thorough understanding of the lastest ideas in Decorative Art and was to lead to important collaborations at the manufactory.

Hetsch was particularly interested in the work of Danish sculptor and medalist Bertel Thorvaldsen (1770-1844) whom he had met in Rome in 1812.

In 1824 Hetsch began to produce copies of Thorvaldsen's work. He used biscuit porcelain to emulate the soft white marble reliefs conceived by the artist. These were hugely popular and a commercial success, so much so they were shown to critical acclaim at the Great Exhibition in London in 1851. The present lot is a further development of this creative relationship between the manufactory and sculptor. It is the perfect collaborative exponent, in the form of a Royal gift, for a leading Danish sculptor, one of Europe's great porcelain manufactories and a talented artistic director.

Sir Andrew Buchanan (1807-1882) was a highly distinguished Scottish diplomat who enjoyed a wide-range of postings throughout his illustrious career. From his first posting in Constantinople, he served in Rio, St Petersburg, Copenhagen, Florence, Madrid, and The Hague, culminating in his appointment as ambassador extraordinary and plenipotentiary to the King of Prussia, ambassador extraordinary to Russia, and finally ambassador to Austria.

The present lot is a testament to his formidable negotiating skills and was presented to Sir Andrew for his role in the Copenhagen Convention of 1857, which resulted in the abolition the toll exacted by the Danish Crown from ships passing through the straits of Øresund. Ever the diplomat, Sir Andrew sought the opinion of the Foreign Secretary, Lord Clarendon, regarding the propriety of accepting such a gift and was advised to ensure it didn’t become public knowledge. This case of precious jewel-like plates was surreptitiously sent via the Danish consul in Hamburg to the consul in Alicante aboard to the steam ship 'Barcelona' before delivery to Sir Andrew free of customs duties thereby avoiding the attention of any gossiping newspapers (see Buchanan Papers, University of Nottingham).