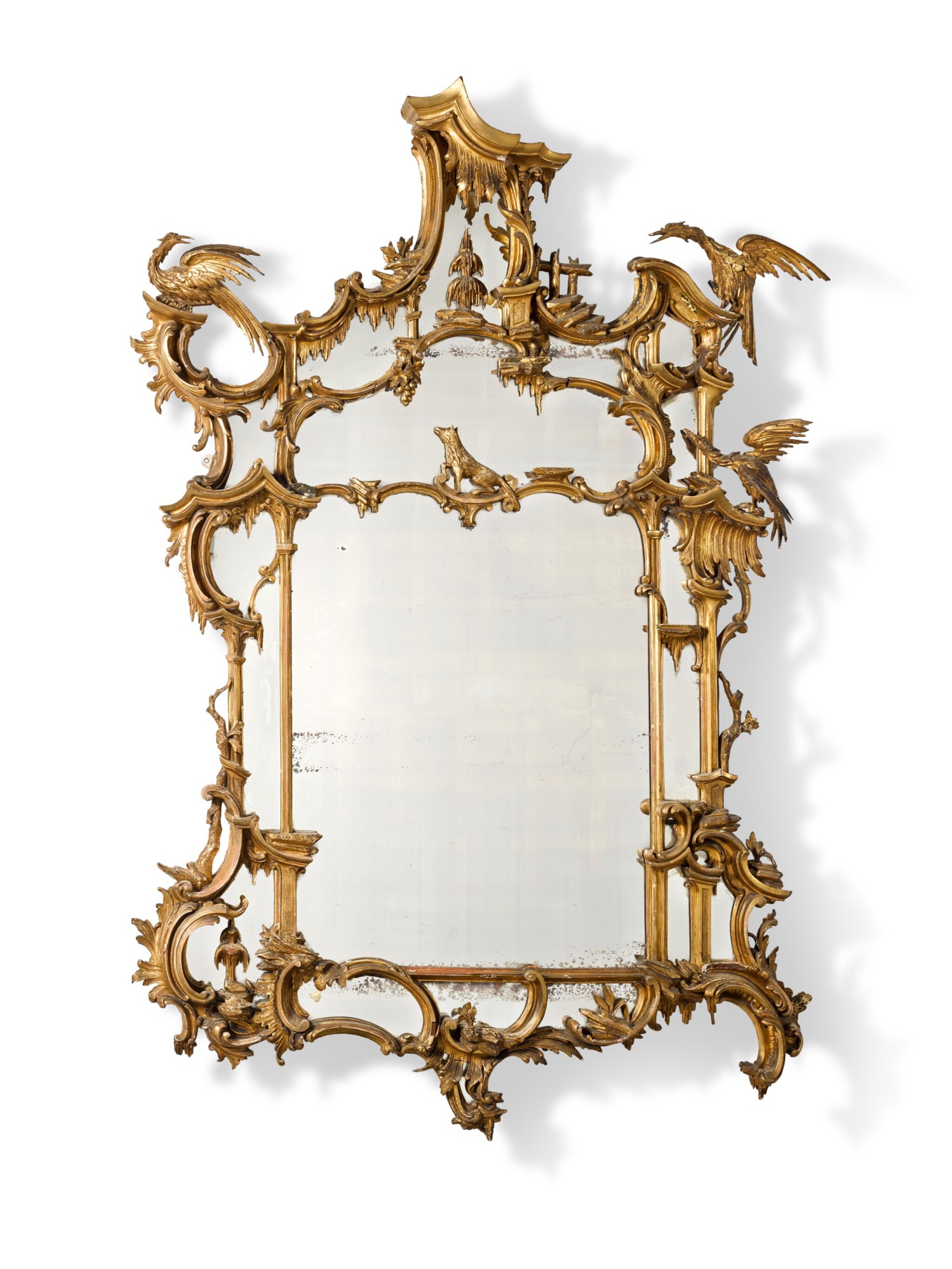 the boldly carved frame in the rococo style, with mirrored reserves, losses

A spectacular mirror that will restore very well. Missing some carved flora and fauna including possibly a small swan to apron and dog to marginal scrolling when compared to Johnson's original design. The moulded and scrolled structure with age cracks, splits and separations. Areas of filler and crude estate repairs. Chips and losses to carved detail. Areas of re-gilding and rubbing to raised surfaces. There is movement to the piece at constructional joins to both the front and the back. Two of the birds have come off and been reattached and present losses. Mirror plates with areas of foxing and losses to silvering. Frame is in country house condition and would benefit from a deep clean and further attention. Very decorative.

By repute this remarkable mirror was supplied to the 1st Earl of Bective, possibly for Headfort, a house built to designs by George Semple, or perhaps for the Earl's London townhouse. The vendors family are descendants of the 1st Earl. Certainly there are three further stylistically similar mirrors which formed part of a distinct group from Headfort. All share some key characteristics, primarily elaborately carved frames in a flamboyant rococo style (illustrated, James Peill and The Knight of Glin, Irish Furniture, 2007, pp. 262-263, pls. 230, 232, 233 and 234)

It is particularly interesting that the present mirror, conceived in the late George II ‘Rococo’ taste, is after a design by Thomas Johnson (1714-1778) first published in 1756 and included in his Collections of Designs, 1758, plate 4 (reproduced Helena Hayward, Thomas Johnson and English Rococo, London, 1964, also as plate 4). Johnson's publication was dedicated to Lord Blakeney, 'Grand President of the Anti-Gallican Association and to the Brethren of the Order' of which Johnson was himself a member. While the Association was founded 'to oppose the insidious arts of the French Nation', it is ironic that Johnson clearly transposes elements from French patterns. Johnson’s exuberant imagination informed his fantastical designs, with recurrent motifs including dolphins, exotic birds (as evidenced in the present lot), animals from Aesop's fables and Chinoiserie figures. Evidently his talent caught the attention of Chippendale who credits him with several Rococo designs in the Third Edition of the Director.

Johnson was also a highly skilled carver and gilder, and is known to have supplied mirrors in the early 1760s through the London upholsterer George Cole of Golden Square, Soho, to Paul Methuen at Corsham Court, Wiltshire, and the Duke of Atholl at Blair Castle in the Scottish Highlands. It is very possible that the present mirror, offered here, could well have come from his workshop.