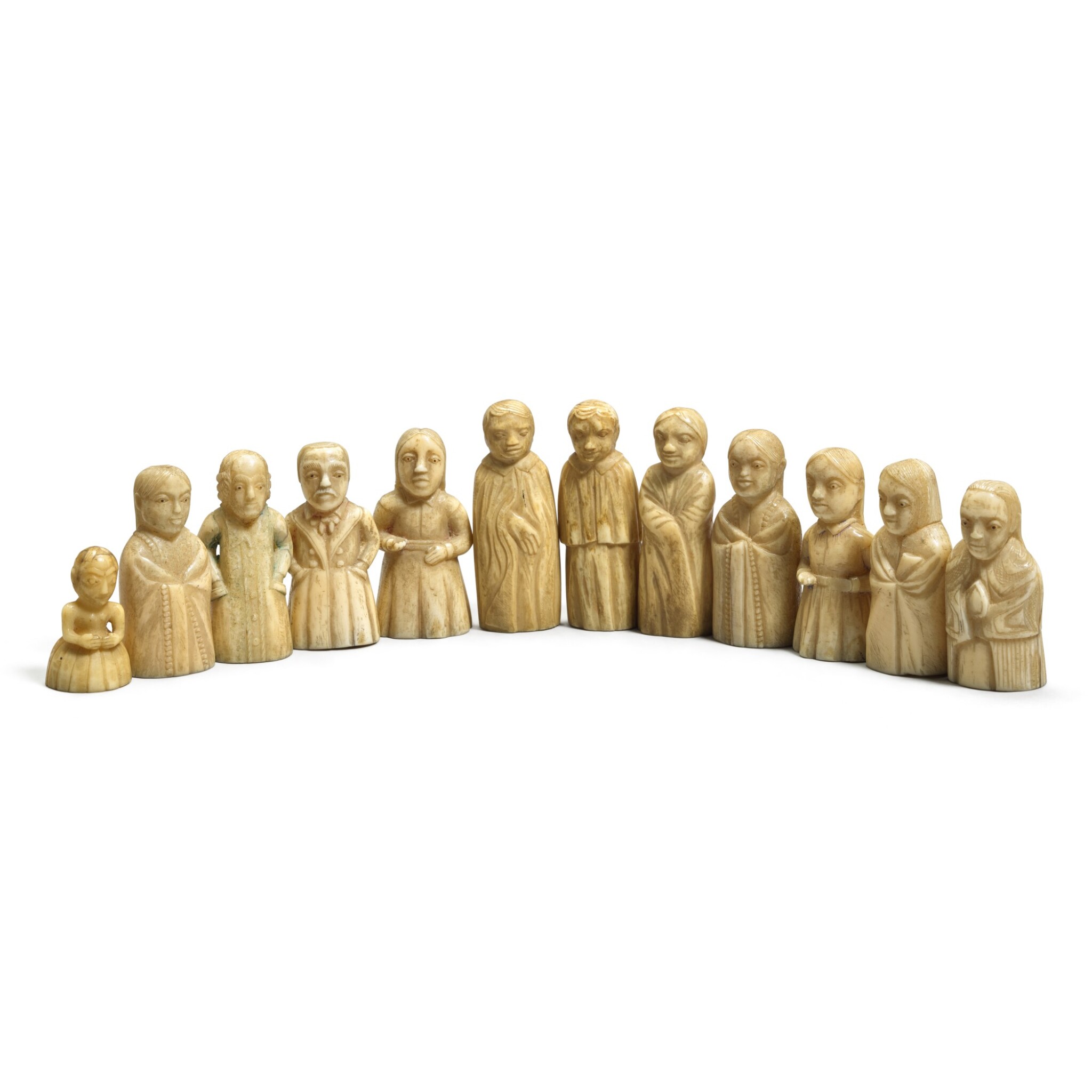 This lot contains endangered species. Sotheby's recommends that buyers check with their own government regarding any importation requirements prior to placing a bid. Please note that Sotheby's will not assist buyers with the shipment of this lot to the US. A buyer's inability to export or import these lots cannot justify a delay in payment or sale cancellation.
Acquired from a local craftsperson by Eden Colvile (1819–1893), Governor of Ruperts Land and later the Hudson's Bay Company;
Possibly a gift to his sister Isabella Colvile (1812-96);
Thence by descent to her grandson, Major General Arthur Henry Marindin (1868-1947);
Thence by descent to his daughter, Barbara Eunice Marindin Adam (1905-88);
Thence by descent.

In the 19th century, on the Northwest Coast of British Columbia, Haida artists and European and American sailors and traders engaged in a flourishing trade for sculptures that encompassed imagery from both Haida and European cultures. The group of charming marine ivory figures offered here includes fine examples of both Haida and European characters, dressed against the cold of winter in flowing robes and long coats. Deftly carved, these engaging little figures demonstrate the Haida artist’s keen eye for detail. Amongst this rich cast of characters, note the two European men, who stand with their hands in the pockets of their sumptuous frock coats. The artist has, with evident delight, carefully depicted the luxuriant eyebrows, the artfully curled hair, and the soup-strainer moustache. Carved with similar care is the figure of an august Haida chief in his richly decorated fringed ceremonial robe, out of which peeks the shield-like form of a “copper”, the most important object of symbolic wealth amongst the Haida.

Most of the Haida objects traded with Europeans were made from argillite, a lustrous, fine-grained stone that is found only on a steep wooded mountainside in Haida Gwaii. Although it was not uncommon for argillite figures to have faces carved from marine ivory (notably in the case of certain “sea captain” figures and some of the elaborate “panel pipes”), small marine ivory figures such as those offered here are very rare and greatly outnumbered in collections by argillite sculptures. For another rare Haida marine ivory sculpture, see the very fine bust of a European man in the collection of the Royal British Columbia Museum, Victoria (cat. no. 16497).

The group was discovered hidden in a leather trunk with a label inscribed '...bone figures brought by Eden Colvile from Hudson Bay Territories about 1840' which appears to support this provenance. A copy of which is available with this lot.