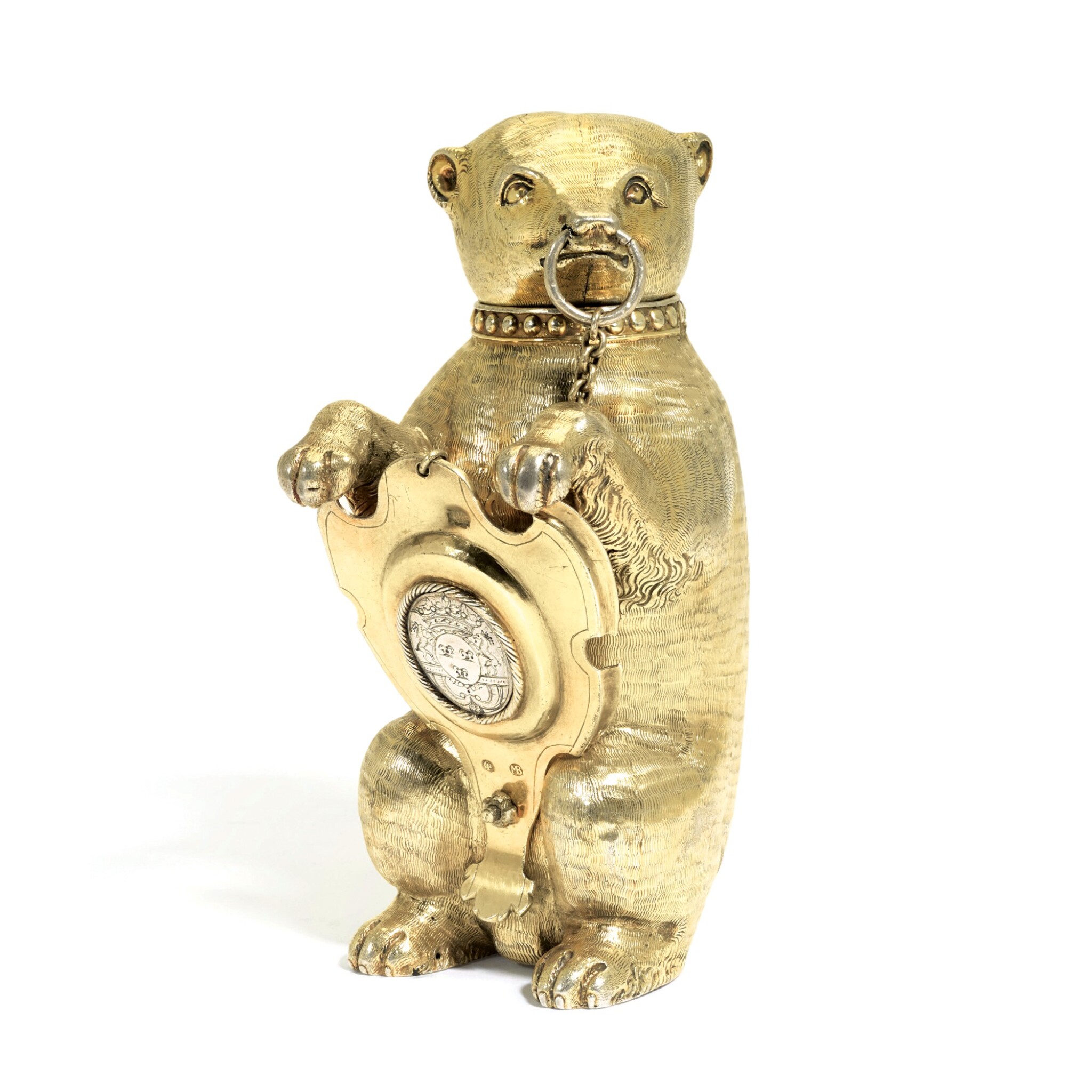 on its haunches supporting a heraldic shield, with chained nose ring, beaded collar, the shield engraved with a Ducal coat-of-arms, the body, head and shield also with 1806-1810 Austrian control marks, the shield Melchior Bair, Augsburg, circa 1600

A crack in head towards right ear, 1 cm long. There is a split at the joint of head and plain rim, 2 cm. Split in upper part of body where it meets decorative collar, 0.5 cm. There is a small dent to body at the very base of animal below its tail. There is a dent to edge of shield, otherwise minor scratches and dents only. Generally in good condition, with excellent colour, good clear marks and light wear only to gilding at pressure points.

Several examples of cups survive from the 16th century which are in the form of bears, recalling the many dancing bears then seen in street entertainments across Europe (Fig.1). In German culture the bear has been symbolic of the state of Brandenburg since the 12th century rule of the first Margrave, Albert the Bear (1100 [?]-1170). In the early modern period a bear was adopted for the Berlin coat-of-arms as well as the city's assay mark.

In Europe during the 16th century, trinkspielen (drinking games) became a fundamental part of dining entertainment. Cups in the form of noble creatures, including stags, lions and owls, were often used at guild ceremonies and hunt feasts. For example, the Royal Lion Drinking Cup1, presented by William III of England to the Burghers of Berne about 1690, is in the form of an heraldic lion supporting a shield emblazoned with the King's arms. A ledger of 1801 belonging to the Archers' Guild, to whom the cup had been transferred, records an occasion when it was used at an annual shooting competition dinner, when 'Governor Graf emptied the King William [as the Lion Cup was known] nine times and Carl von Graffenried von Bergenstein drained his Minister [a cup in the form of an owl] in one go.' Whether on display or distributed for use around a dining table, the evident costliness of these extraordinary vessels were witness both to the generosity of their donors and the high standing of their owners.

This bear is likely to have been acquired by William, 11th Duke of Hamilton (1811-1863) who, building on the collection of such pieces owned by his maternal grandfather, William Beckford of Fonthill (1860-1844), was a keen collector of Continental silver, Limoges enamels and other items of antiquarian interest. He married Marie Amelie, Princess of Baden in 1843 and lived chiefly in Baden and Paris. In 1857 two inventories compiled of the Duke's plate by R. & S. Garrard & Co., the Crown Jewellers, record a silver-gilt bear at Brodick Castle on the Isle of Arran2 and another ('A chased Sr. gilt Bear') at his London town house in Arlington Street.3 This second bear was transferred to the Brodick Castle inventory, apparently on 28 October 1874.4

Another inventory of the plate at Brodick Castle, compiled by the Glasgow auctioneers, Morrison, Dick & McChlery in November 1921, lists two bear cups (the first of which is this present example) on p. 195:

By then the collection had passed to the 11th Duke's granddaughter, Mary Louise (1884-1857), only child and principal heir of William Alexander Douglas-Hamilton, 12th Duke of Hamilton, who was married in 1906 to James Graham, Marquis of Graham who in 1925 succeeded as 6th Duke of Montrose (1878-1954). Annotations to the Morrison, Dick & McChlery inventory relating to the silver from Brodick Castle sold by the trustees of the 12th Duke of Hamilton at Christie's on 1 July 1931, as well as objects given away as presents around the same time, suggest that this present bear (the 'Old Silver Gilt Bear supporting Shield, with Coat of Arms, 7 ½” high') was still in the Duke and Duchess of Montrose's possession after that date.

The second bear was sold in the Marchioness of Graham’s sale at Christie’s, London on 2 June 1919 (lot 65, £195) and is now (lacking its ‘circular stand’) in the Schroder Collection.5

2. 'Inventory of the Arran Plate belonging to His Grace the Duke of Hamilton 1857,' entry 11 (National Trust, Brodick Castle)