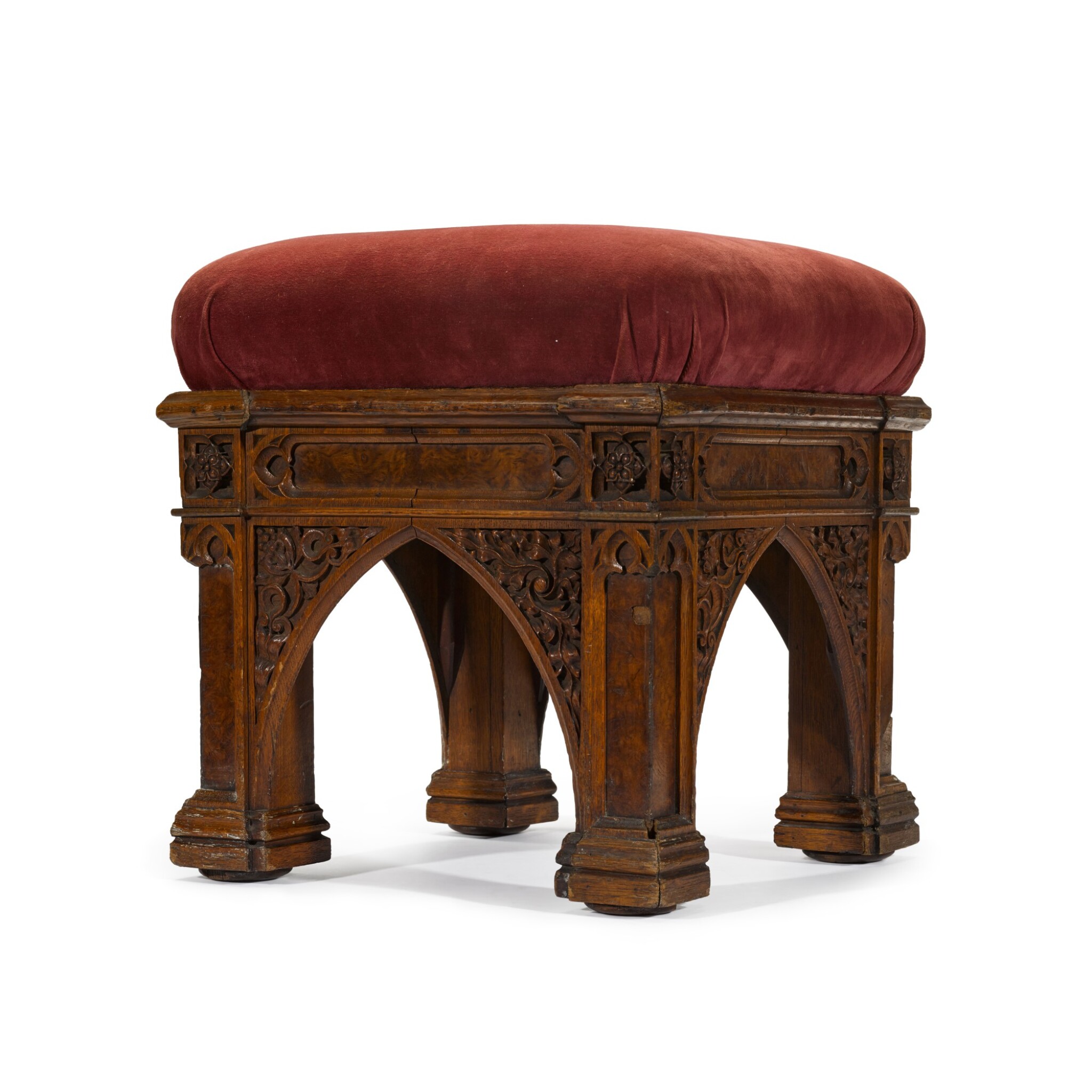 Of excellent quality befitting a royal commission. The frame with much evidence of use including chips and losses to carved detail and pollarded veneers, including to angled corner of each leg which is missing a moulding from historic restoration. The drop in seat with later upholstery but apparently retaining its original webbing. Evidence of crude repairs to these sites. Patched replacements to both veneers and mouldings, some notable chips and old losses as a result of function (eg veneer on the corner approx. 11cm. in length). Some movement along lines of construction but the stool is sound and sturdy. Beech pads to feet possibly later and with chips. Old marks and scratches consistent with age and use.

This ‘Gothic’ window stool originally formed part of the extensive furnishings supplied by Morel & Seddon for the newly built apartments at Windsor Castle between 1827 and 1828. Designed by Sir Jeffry Wyattville (1766-1840) for King George IV (1762-1830) the stools were installed initially in Room 225, known as the Long Gallery or Grand Corridor. The Long Gallery joined the Private Apartments on the east and south sides of the Quadrangle with the State Apartments to the north and housed George IV's most prized treasures. John Nash’s evocative series of watercolours from 1846 are a testament to this, capturing the rich interiors of the Grand Corridor replete with crimson curtains and carpet, walls of densely hung Canalettos, a procession of marble busts, boulle inlaid ebony furniture, pietre dure cabinets – including the renowned Borghese cabinet which sold Sotheby’s Paris, Robert de Balkany, Rue de Varenne, Paris, 20 September 2016, lot 56 (€2.5m) - and no fewer than eighteen carved giltwood tables brought from other Royal residences including Hampton Court, Kensington Palace and Carlton House. Several of the ‘Gothic’ window stools are illustrated in these detailed images (Roberts, op. cit., p. 234, fig. 284).

Nicholas Morel (fl. 1790-1830) had experience collaborating on large aristocratic commissions having previously supplied 3rd Duke of Northumberland with furnishings for Northumberland House between 1822 and 1824 with his then partner Robert Hughes (fl. 1805-1830). In order fulfil the Windsor contract, and the meet the standards of an even more demanding patron, Morel enlisted the help of George Seddon III whose family had large and long-established furniture workshops in Aldersgate Street in the City of London. The stools are described in Morel & Seddon’s detailed accounts as follows:

‘To 28 Gothic window stools of light & dark oak, enriched with tracery, spandrils & highly polished & mounted on castors to correspond with the banquets the seats stuffed and finished in fine canvas

To covering the seats of do with scarlet ground English tapestry, with grey and white silk medallions to suit’ (see Roberts, op. cit., p. 239)

Executed by Morel & Seddon, the design is attributed to a young Augustus Welby Northmore Pugin (dates). Artists from the architectural drawing school run by his father, Augustus Charles Pugin, were employed by Morel & Seddon to create a pictorial record of the clocks, vases, candelabra and other items from royal residencies for consideration for use in the refurbishment at Windsor Castle. In March 1827, Pugin’s 15-year-old son, Augustus Welby Northmore Pugin, began to take part in this project. He was initially engaged to 'make drawings of furniture in Carlton Palace...previous to their removal to Windsor Castle' but by June of that year he had moved on and for £1 1s. per day he was engaged to 'design and make working drawings for the gothic furniture of Windsor Castle'.

Ten of the stools remain in the Royal Collection (RCIN 20447). The brand refers to the Windsor Castle inventory undertaken by Holland and Sons in 1866 and, like others from the suite, cites a different room number indicating the stool had moved from its original location. For other examples from the suite outside the Royal Collection, see the three at Temple Newsam (C. Gilbert, Furniture at Temple Newsham House and Lotherton Hall, Vol. II, 1978, p. 308, fig. 376) and those sold Christie’s New York, 17 October 1987, lot 56, Phillips London, 12 February 1991, lot 146 and Christie’s London, 23 April 1998, lot 50.