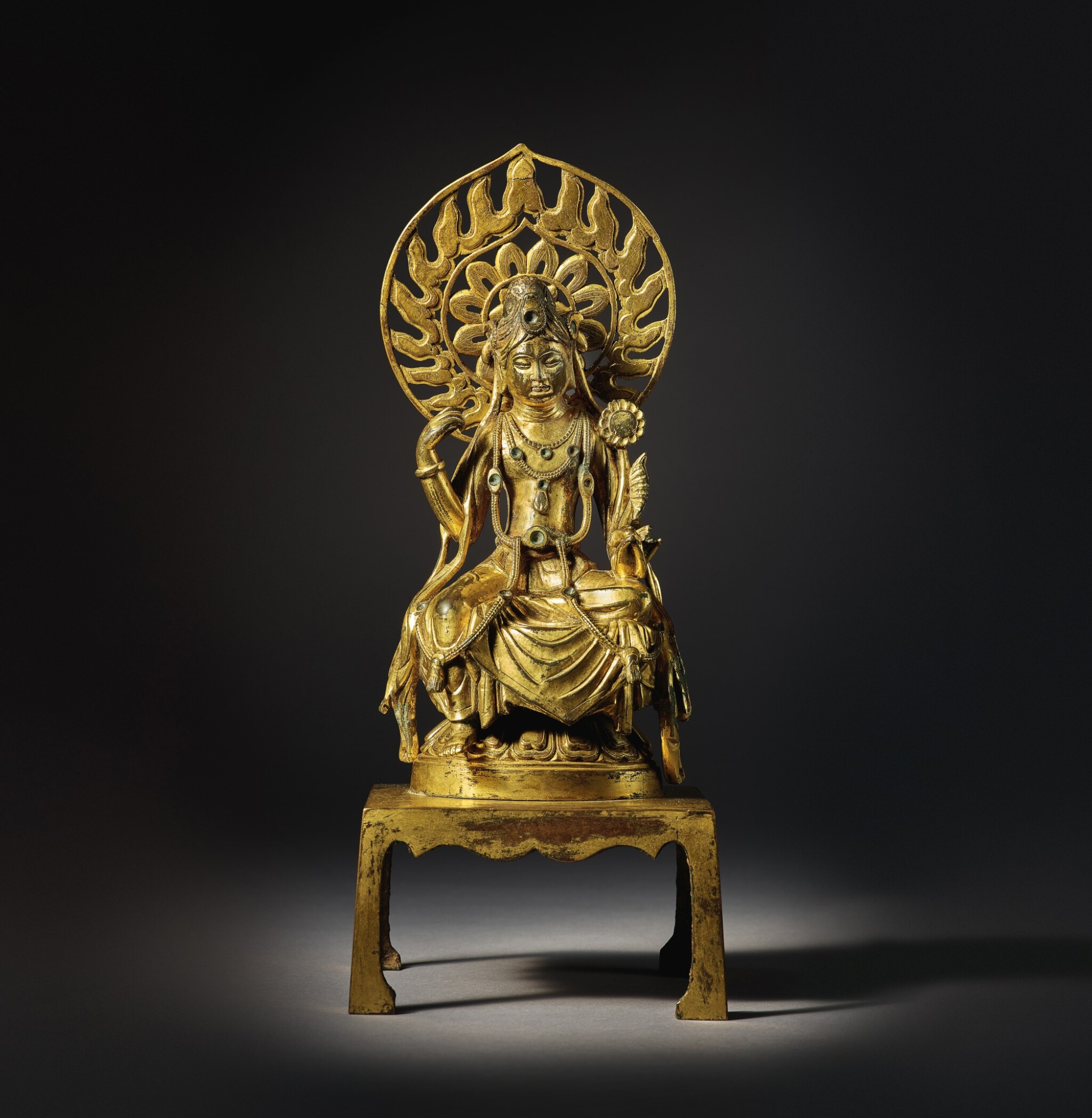 A magnificent and extremely rare gilt-bronze figure of Padmapani

the finely cast figure depicting Padmapani, seated in lalitasana with plump face and full-rounded cheeks, adorned in sumptuous beaded jewellery, the hair tied in a high top knot, a lotus blossom snakes up the left arm, while the right hand protrudes the trailing shawl in a mid-motion manner

The figure is in good overall condition with just minor surface wear, rubbing to the gilding and typical oxidisation. The original stones have been lost. The right foot and lower section of the drapery (approx. 2.5 cm) have been broken off and restored. The stand and aureole, possibly matched in antiquity, are in good condition with minor dents and rubbing to the gilding.

This large finely cast figure can be identified as Padmapani, a manifestation of the bodhisattva Avalokiteshvara, by the lotus blossom at the left shoulder. The cult of Padmapani and this distinctive iconography emerged in the late 4th and early 5th century, and continued to be popular in the Tang dynasty. In this manifestation, Avalokitesvara, who is credited with the creation of all things animate and is believed to impersonate the power of creation, is depicted majestically standing against a flaming mandora to display his strength. The bodhisattva is dressed like a prince, adorned with opulent jewellery that serves also to denote his worldliness, as has vowed to remain in the world until all sentient beings have achieved enlightenment.

Depicted seated in lalitasana adorned in sumptuous beaded jewelry with hair pulled into a high-top knot, the sculpture embodies the style of the high Tang period, with its sensitive treatment of the natural curves and flow of the body. This representational mode was influenced by Indian art, and the characteristics include a rounded face, well-modeled cheeks, a subtly sensuous silhouette, and opulent jewelry. Compare a seated bodhisattva in similar posture, illustrated in Saburo Matsubara, Chinese Buddhist Sculpture, Tokyo, 1966, pl. 269. See also a Tang standing figure of a bodhisattva in the collection of Harvard Art Museum, bequest of Grenville L. Winthrop, 1943.53.77, illustrated in Leopold Swergold, Thoughts on Chinese Buddhist Gilt Bronzes, 2014, pl. 27. The Harvard figure is of smaller size, with less naturalistic curves to the form, but with similar treatment of the robes and also with original stone settings now missing. For another Tang gilt-bronze figure of closely related style and of similar high quality, see the example from the collection of Frederick M. Mayer, included in the exhibition Chinese Art, Venice, 1954, cat. no. 265, and sold at Christie's London, 24th/25th June 1974, lot 131.