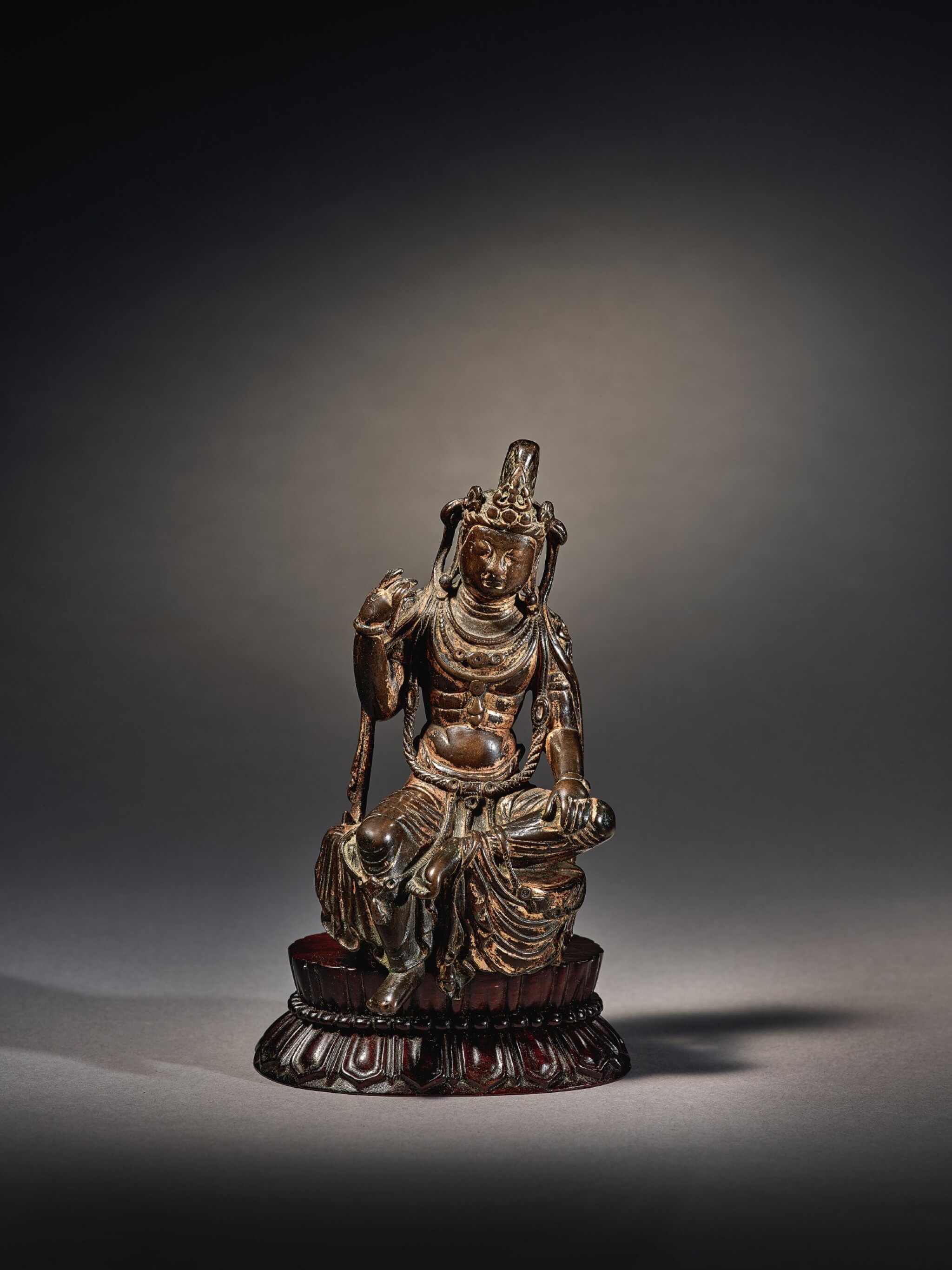 A gilt-bronze figure of a Bodhisattva

naturalistically and elegantly cast in the form of a Bodhisattva seated in lalitasana with right hand raised in vitarka mudra and left hand resting on the folded knee, adorned in opulent jewellery and draped in a celestial billowing scarf, a loose dhoti elegantly cascading in folds over the legs, the deity’s legs casually hanging down below the plinth, mimicking a more realistically conceived rendering of a body, the angled-hip evoking a prominent sense of movement and sensuality

Beatrice Chan，〈Reflection and Enlightenment: Chinese Buddhist Gilt Bronzes from the Jane and Leopold Swergold Collection at the Museum of Fine Arts, Houston〉，《Arts of Asia》，2018年1至2月，頁58-65

The sensual naturalism of the casting on the bodhisattva encapsulate the maturity of the high Tang style. The graceful folds of the robes retain the influences of Hellenistic art in their adherence to the contours of a realistically conceived body, and in the way the drapery spills over the edge of the seat. The sheer quality of the casting captures the slight tilt in the figure's hips and the turn of the head imbuing the bodhisattva with dynamism and vitality; the skilfully defined and muscular torso, graceful curve of the exposed belly above the waistband, and curved toes exuberating movement.

It is rare to find a Tang sculpture of this high quality naturalism in bronze, but the style is closely related to that more commonly found on stone sculpture of the period. See a figure of a bodhisattva, carved in the same posture with identical treatment of the face, jewellery and drapery, photographed in situ in Cave 14 of the Tianlongshan Caves, illustrated in Osvald Sirén, Chinese Sculpture from the Fifth to the Fourteenth Century, New York, 1925, pl. 495, and three other similar figures flanking the Buddha from Cave 17, pl. 498. Compare also a similar figure of a bodhisattva in the Nelson-Atkins Museum of Art, originally in Cave 17, illustrated in situ in Sun Di, ed., Tianlongshan Shiku [T'ien Lung Shan Grottoes], Beijing, 2004, p. 148, pl. 176, and a sandstone seated bodhisattva included in the exhibition Exhibition of Chinese Arts, C.T. Loo & Co., New York, 1941, cat. no. 938, and sold in these rooms, 29th April 1997, lot 709, from the collection of J.T. Tai & Co.