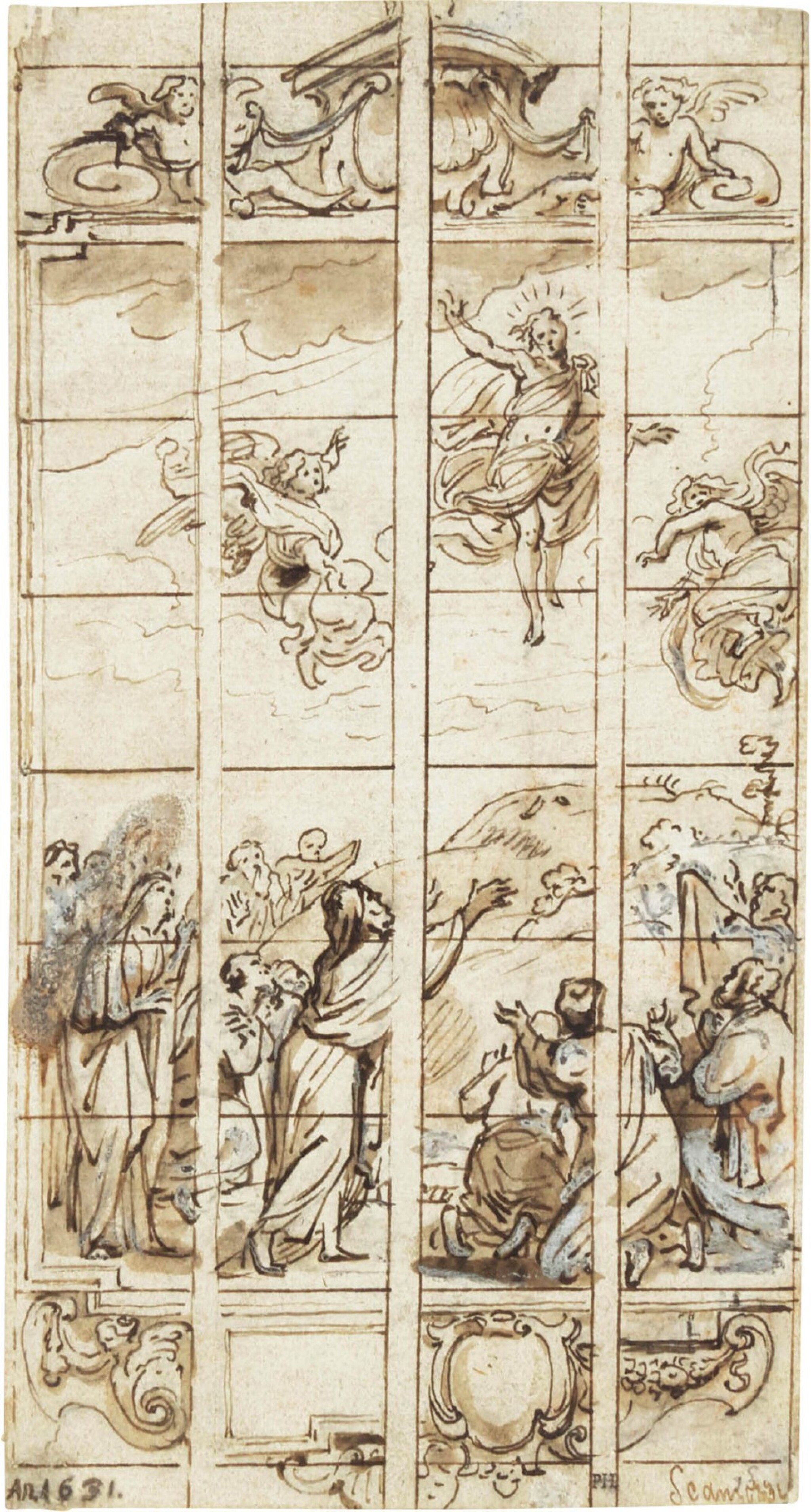 This accomplished depiction of The Resurrection, drawn across four vertical panels indicating the sections of the projected window, bears the date 1631 in the lower left corner, possibly inscribed by the artist himself. Either way, the drawing fits well within this early phase of Abraham van Diepenbeeck's career.

Diepenbeeck's initial training as an artist was with his glass-painter father, and when he first settled in Antwerp in the early 1620s, it was as a master glass painter that he registered with the Guild of St. Luke.  It is thought that Diepenbeeck painted some seventy-six windows, the majority of them during the 1620s and 1630s, but none of the windows themselves survive, and hardly any of the designs for them.

Despite the fact that no related window is known today, Zsuzsanna van Ruyven-Zeman has recently proposed (loc. cit.) that the present drawing can be connected with the glazing of Antwerp Cathedral, based on similarities in the ornamental surround with the windows in the clerestory of the Cathedral's northern transept.

Variants of the same composition are also known through prints. A large, horizontal-format print depicting a version of the same composition with additional figures was published by Claes Jansz. Visscher as one of a great series of biblical illustrations; an impression of that print is in the Rijksmuseum.1  The print indicates that Diepenbeeck was the designer, but the composition was clearly inspired by prototypes - originally painted but chiefly known through engravings2 - in the work of Rubens, emphasising once more how closely interwoven are the works, in all media, of Rubens and the artists like Diepenbeeck who were active in his close orbit in Antwerp.

In her important recent article on Diepenbeeck as a draughtsman, Saskia van Altena reproduces one of the very few other glass designs by Diepenbeeck that are known, a drawing of The Presentation of the Virgin in the Temple (formerly in the Julius Held collection3), which is a study for a three-panel window, very possibly part of the lost series of windows illustrating scenes from The Life of Christ and the Virgin, which were commissioned from Diepenbeeck for the Chapel of Loretto in the destroyed Carmelite Church of Onze-Lieve-Vrouwebroeders. Like the present drawing, with which it was formerly together in the Lankrink collection (see Provenance), the ex-Held Collection sheet demonstrates a certain mannerist elongation of the figures that is typical of Diepenbeeck's drawings from this early part of his career. Another of the artist's rare stained glass designs, for a five-light depiction of The Lamentation, again very similar in style to this, was sold at Sotheby's Amsterdam some years ago.4

For a further drawing by Diepenbeeck in the Wieg collection, see lot 22.

We are most grateful to Saskia van Altena for her help while cataloguing this drawing, and for bringing to our attention its publication by Zsuzsanna van Ruyven-Zeman.