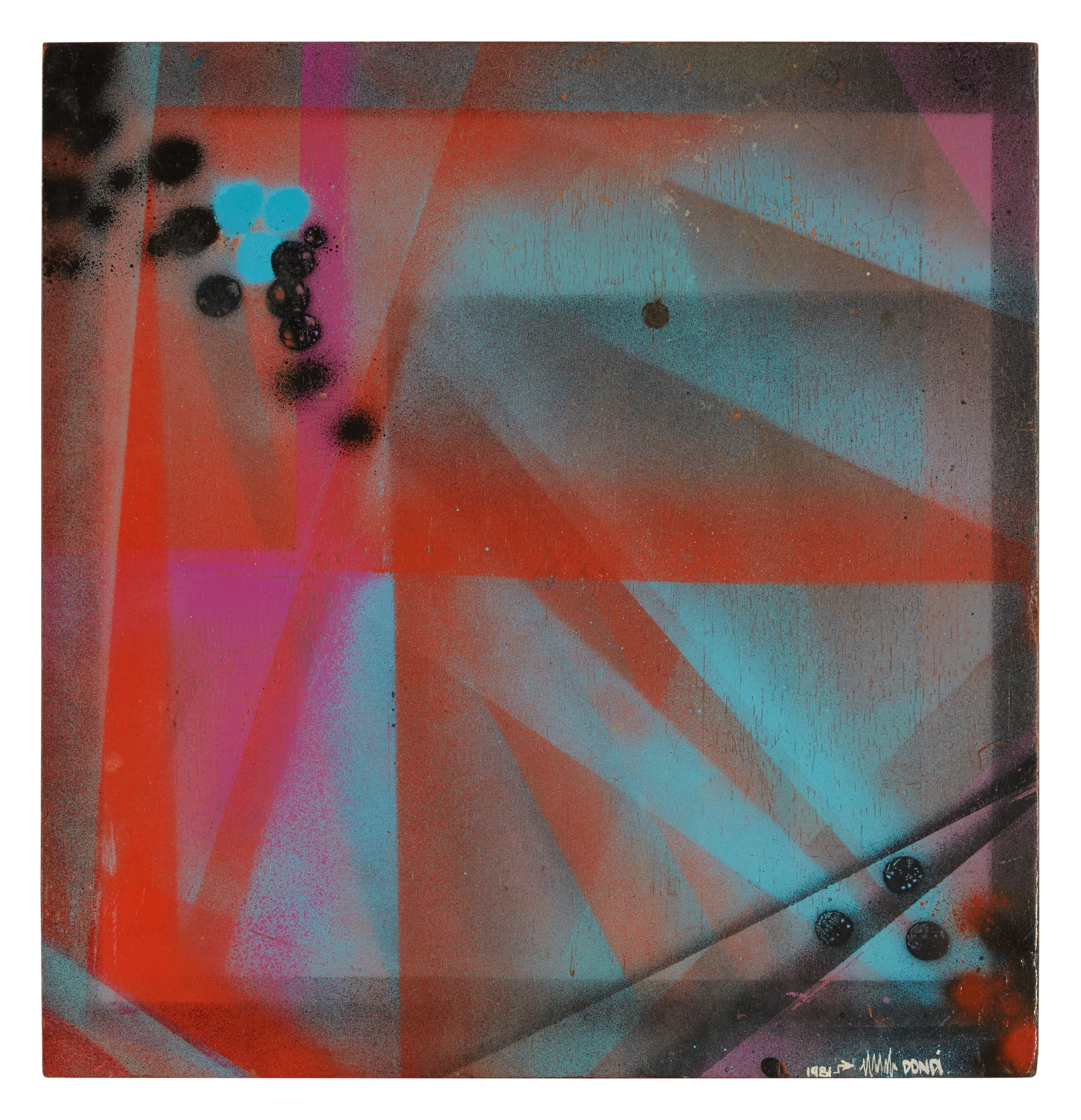 This work is in very good condition overall. There is general wear with associated scratches, abrasions and losses to the wood at the turning edges; the latter found most notably at the lower corners as well as: at the central right turning edge, the second at 4 ½ inches above the lower left corner, a third at 7 inches to the right of the lower left corner, and the last at the turning right edge of the upper right corner. Upon further inspection of the losses to the wood, some of these appear to have been present prior to execution. There are small stable cracks throughout the pigment mirroring the texture of the wood due to the expansion and contraction of the wood material over time. Unframed.

The collection of Leonard McGurr (Futura) (acquired from the artist)

Private Collection, New York (acquired from the above)

Dondi White was an American graffiti artist best known for his stick figures and dynamic style of “large block” lettering. During the early 1970s in New York City, a formative period that marked the start of Dondi’s career, he began painting trains alongside a group of artists known as The Odd Partners primarily on the M, J, and L subway lines. In the late 1970s, Dondi established a new group of artists known as CIA and cemented his reputation as one of the most iconic and influential street artists of his generation. In the 1980s, he continued to develop his bold, dynamic style of lettering in sketch books and on trains, as demonstrated in Tag – a record of his ephemeral artistic production -- as well as on canvases with legendary artists in the East Village, including his contemporaries Futura, Keith Haring, and Jean-Michel Basquiat. Prior to his death from AIDS complications in 1998, Dondi increasingly expanded his creative output, incorporating his signature lettering, symbols, and stick figures into multi-media collages. Known as the “Style Master General,” Dondi’s pieces “ranged from quickly written tags to creations that covered whole cars, making him a legend on the streets and in galleries years before ‘street art’ became popular, and setting a standard that is still followed to this day.” [1]

This work is being sold to benefit Art Without Boundaries, a Los Angeles based nonprofit organization focused on collecting and preserving street art. Founded in 2018, their projects seek to legitimize graffiti within the history of art while empowering emerging artists to continue advancing the medium.