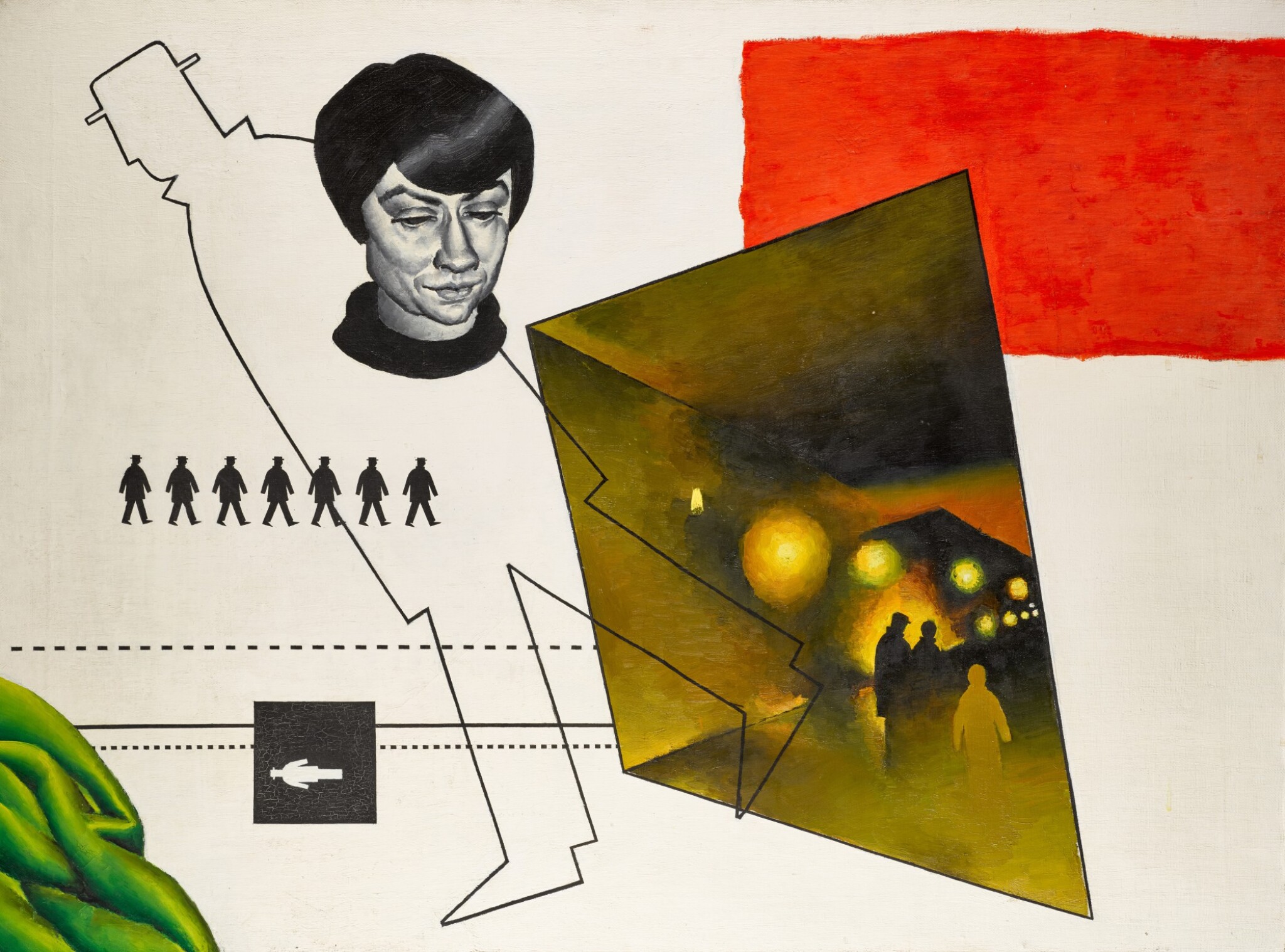 signed and titled in Cyrillic and dated 1966 on the reverse

Original canvas which has worn through in the corners. A small area of craquelure is visible in the yellow-green area in the lower left and shows minor associated losses. There is an area of diagonal cracks running from the black square across the silhouette. There is a further small area of craquelure to the red rectangle and some minor cracks elsewhere. A fleck of paint loss can be seen to the upper right of the trapezoid. The black square shows paint shrinkage. There are minor surface scratches and scuff marks in places. There is a light layer of surface dirt, minor handling marks and a drip stain in the lower right. Abrasions with minor associated losses are visible along the edges. Inspection under UV light reveals no obvious signs of retouching. Unframed.

Urban Painting belongs to a series of works by Bulatov from the 1960s, which marked his departure from a predominantly figurative, expressionistic style influenced by the work of one of his early mentors, Robert Falk. Falk was a key figure within the Russian avant-garde realm who taught at Vkhutemas-Vkhutein in Moscow during the 1920s-early 1930s and whose artistic method influenced an entire generation of Soviet artists.

In 1956 Bulatov first encountered Falk’s close colleague from Vkhutemas-Vkhutein, wood engraver and theoretician Vladimir Favorsky. Favorsky’s teaching of book design as ‘a spatial visualisation of a literary work’ and his broader series of lectures on the theory of composition were among the most innovative and influential events which took place at the renowned institution during its existence. It was the conversations with Favorsky during the late 1950s-early 1960s which helped Bulatov develop his own ideas about pictorial space which would become central to his oeuvre.

In the art critic Evgeny Barabanov’s view, Urban Painting represents one of Bulatov’s main approaches to the treatment of painterly surface within an artwork. ‘The surface is akin to the white surface of the editing screen, in the force field of which small stencil figures are floating alongside various colour planes, outlines, fragments of spatial composition and elements of monochrome documentary portraiture, which altogether create an illogical interaction of different stylistic elements. The surface here is reminiscent of memory, which actively retains traces of disappearing reality’ (M.Arndt (ed.), Erik Bulatov. Catalogue Raisonné in Two Volumes. Volume I: Paintings 1952-2011, Cologne: Wienand, 2011, p.27).

The female figure pictured in the present work is the artist and journalist Olga Andreeva, granddaughter of the writer Leonid Andreev, known, among other things, for her efforts to help Aleksandr Solzhenitsyn smuggle his manuscripts out of the Soviet Union and get them published in the West. Andreeva features in other works by Bulatov from this period, including City at Night (1967).