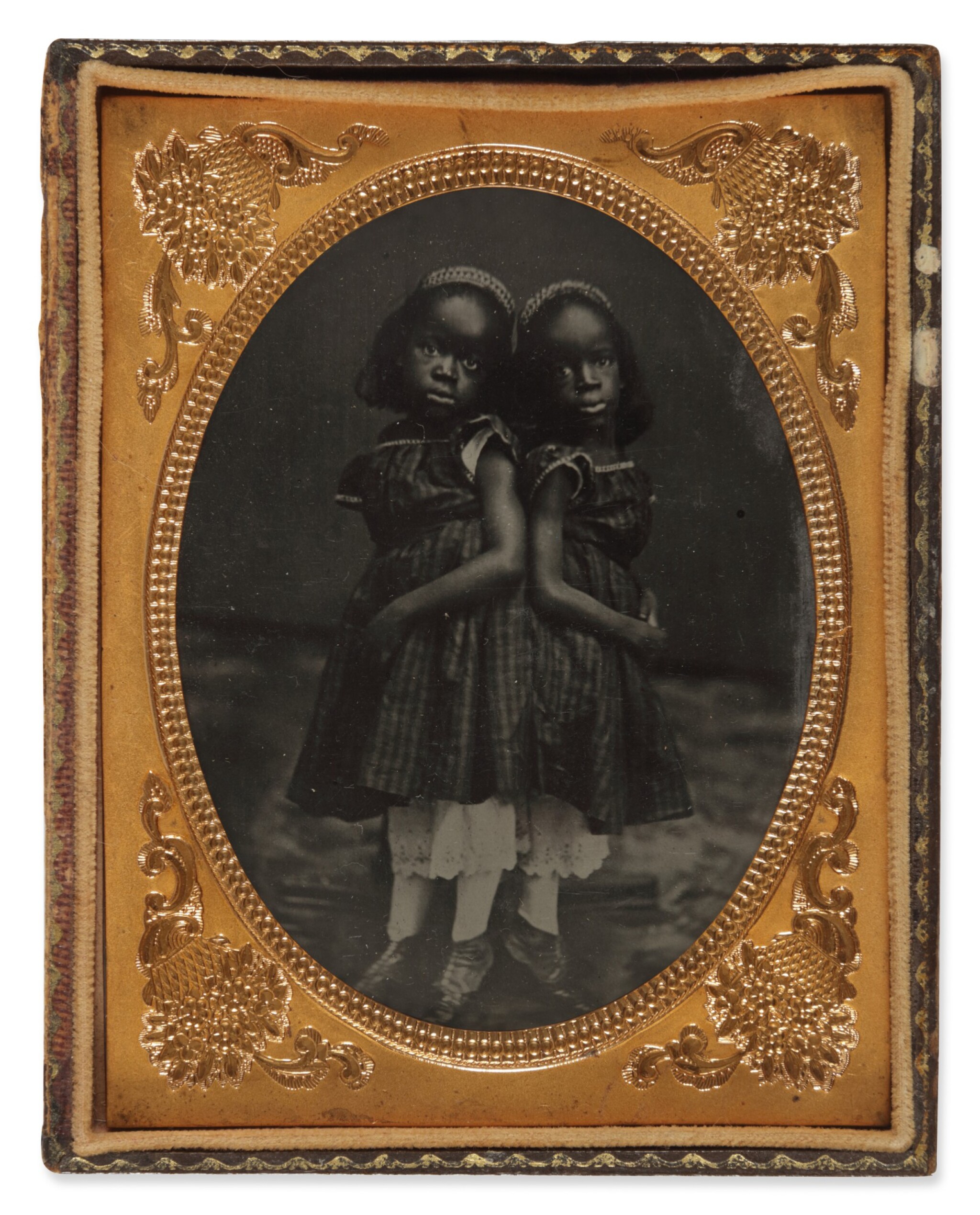 Please note the color and shades in the online catalogue illustration may vary depending on screen settings. This tintype is in generally very good condition. There are fine scratches overall. From the dainty trim on her gingham dress to the lace border of her petticoat, a high level of detail remains visible. The leather case has a floral design. It is split at the spine and worn overall, but remains attractive.

By descent to the present owner
Other photographs of Millie-Christine:

All in one perfect body meet.’ – Millie-Christine

This tintype depicts Millie and Christine McKoy (1851-1912), better known to history as The Carolina Twins, The McKoy Sisters, The Two-Headed Nightingale, or simply as Millie-Christine. Born into slavery and seeded in tragedy, the remarkable life of Millie-Christine was, against all odds, one of victory over adversity.

The daughters of Jacob and Monemia McKoy, Millie and Christine were born conjoined at the lower spine. Within their first decade Millie-Christine were bought, sold, and stolen away from their family several times by showmen who profited off their public display at fairs throughout the United States, Canada, and Britain. Their last ‘rightful’ owner was Joseph P. Smith who, with the help of a private detective, rescued Millie-Christine from kidnappers in Liverpool and returned them to his home in Spartanburg, South Carolina. Millie-Christine were tutored in five languages and became accomplished pianists, singers, and dancers.

At the close of the Civil War in 1865, Millie-Christine returned to the show circuit and, with their newfound freedom, were finally able to draw their share of profits. By 1882, Millie-Christine commanded $25,000 for a season headlining Batcheller and Doris’s Great Inter-Ocean Railroad Show. The twins were generous with their fortune. They bought land for their family, organized a school for African American children, and gave money anonymously to Shaw University, Bennet College, Johnson C. Smith College, Henderson Institute, and Palmer Institute (Martell, p. 263).

Millie-Christine fell into obscurity for many years until Joanne Martell, a former court reporter, stumbled upon their story and published Millie-Christine: Fearfully and Wonderfully Made (2000), to which this entry is indebted. Millie-Christine’s remarkable life is now the subject of new scholarship, art, and poetry. Most recently, Tyehimba Jess brought the twins to life in a series of syncopated sonnets in his 2016 Pulitzer Prize-winning book Olio:

‘-we’re fused in blood and body – from one thrummed stem

grown from hard labor that made our mother shout,

spent with awe. We hymn to pay soft homage

borne of and beyond the flesh: we are just

Although it is impossible to date this tintype with exact certitude, it is believed that this is the earliest such portrait of Millie-Christine to come to market. Later carte-de-visite, cabinet cards, and broadsides featuring the twins are in institutional collections including the Maxine Sullivan Collection at the National Museum of African American History & Culture; Milner Library Special Collections, Illinois State University; Library of the College of Physicians of Philadelphia; North Carolina Division of Archives and History; and the British Museum.