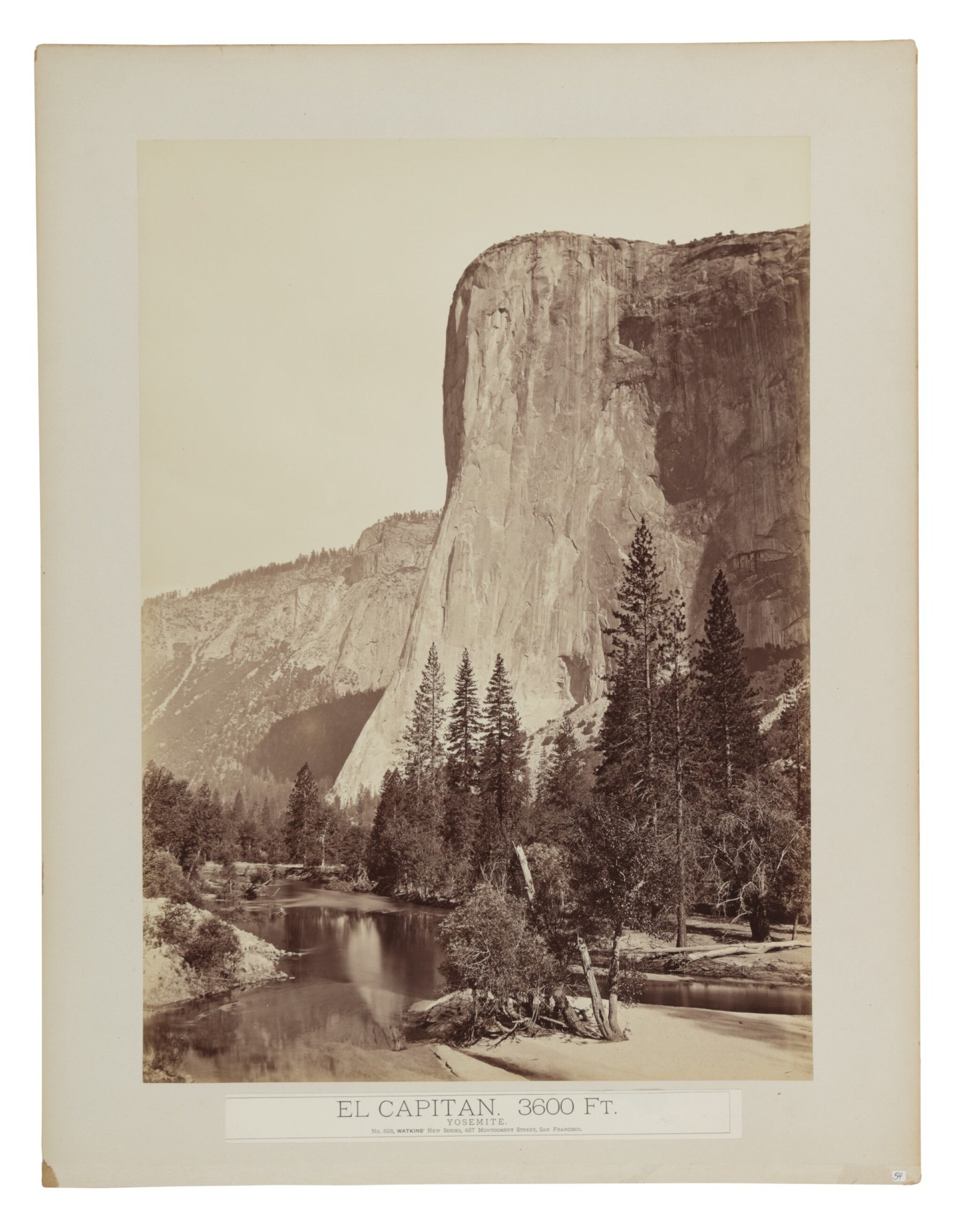 Please note the color and shades in the online catalogue illustration may vary depending on screen settings. The tones of this albumen print are primarily a soft, fawn brown, as opposed to the penetrating darks of other more dramatic views and subjects in this series. A careful examination of the print reveals a wide tonal scale, from the darkest tones of some of the trees, to the soft tones of the sandbars and water. There is no falling-off of tones throughout the print, no yellowing, and no noticeable fading. The light areas retain all of their original detail. Thus, on a scale of 1 to 10, with 10 representing the richest albumen print, this print is a 10 and well represents the photographer's intentions. Only visible in raking light are some linear scuffs in the sky area, the longest measuring 5-inches, and some scattered hairline scratches and tiny impressions. There is a pin-point-sized deposit of retouching at the lower right corner and two small chips at the upper edge. This beautifully modulated, atmospheric print is in generally excellent condition. The mount is worn, lightly soiled, and its edges are age-darkened. The corners are bumped. At the lower right corner is a white rectangular sticker with '54' written in ink. The reverse is lightly soiled and age-darkened at the edges. There are adhesive remnants at the lower edge and the upper right corner. '91788/47' is written in pencil in an unidentified hand.

In his' 1861 view of this massive rock formation, Watkins also used the Indian name, Tutocanula. In his research on Yosemite place names, Peter Browning discusses differing interpretations of this Indian word, among them one referring to ‘a Sandhill Crane, a chief of the First People’; and a Spanish translation, El Capitan, meaning ‘the Rock Chief’ (op. cit., p. 38).

Watkins’s ‘Old Series’ mammoth-plate of the same scene was made from close to the same spot. But in a photograph made circa 1865-66, and in the ‘New Series’ photograph offered here, the camera’s view is more encompassing, and the frame includes not only the sand bar at the bottom of the photograph, but also a significant amount of sky above El Capitan at the top. The sand bar’s old trees in the earlier view, which obscure the lower half of the rock, are gone in the present view, and as with other ‘New Series’ pictures, the photograph is now more consciously composed.

Like the Vernal Fall, El Capitan has been photographed over the decades by a number of photographers using a similar vantage point. From Weed, Muybridge, and Fiske, to Ansel Adams, the photographs communicate the essential majesty of the rock that seems never to have changed.