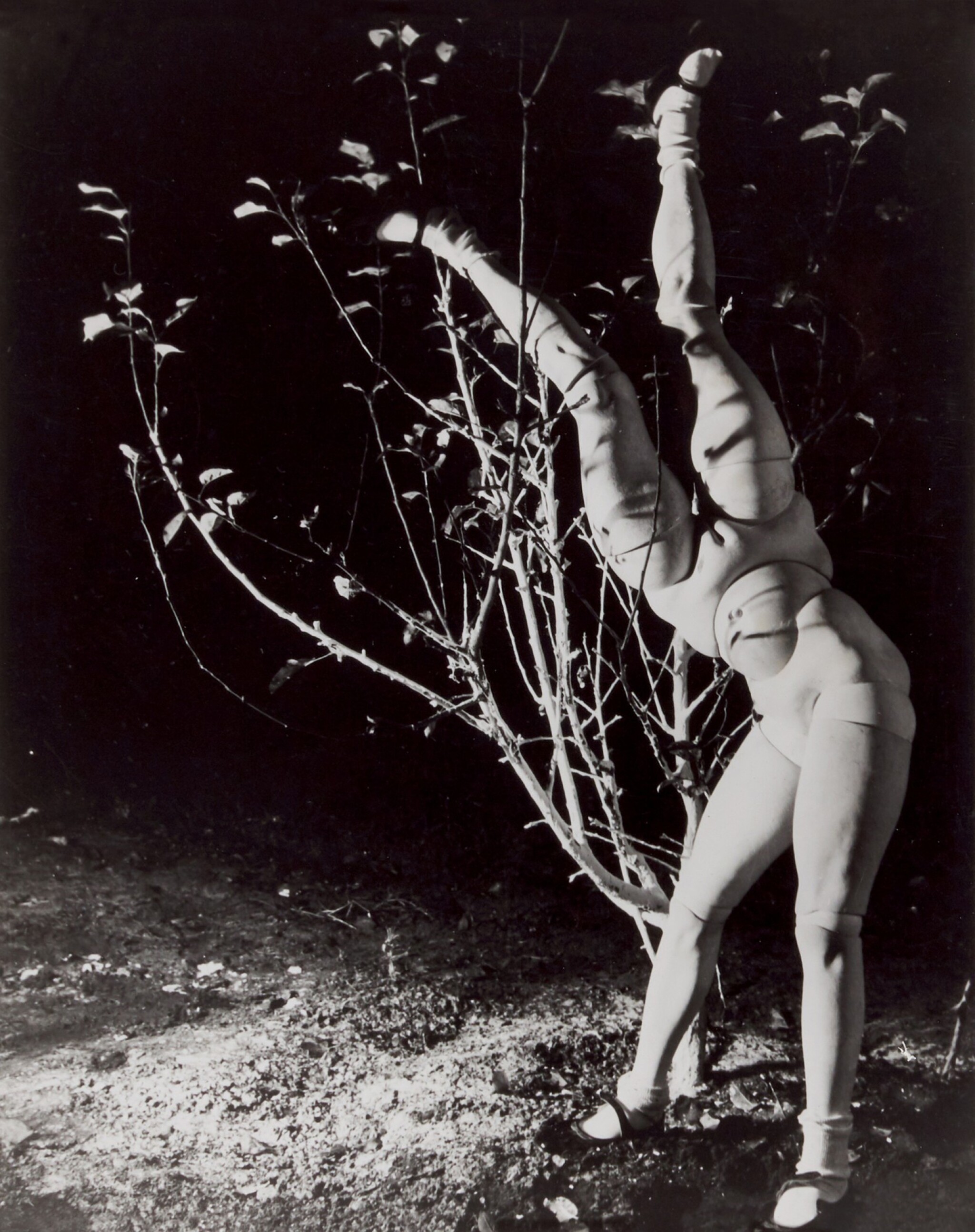 Vintage silver print. With pencil annotations on the verso.

This vintage silver print, on paper with a glossy surface, is in generally good condition. There is age-appropriate silvering in the darkest areas of the print, mostly at the periphery. The sheet is trimmed, slightly unevenly, to the image and there are tiny tears and chips in the emulsion along the edges. Upon close examination and raking light, the following are visible: faint scuffs, scattered pinpoint circular deposits and pressure points. Three handling creases are apparent in the lower right quadrant, with some break of the emulsion. There is also a group of hairline linear creases running diagonally the upper left corner. The paper bows slightly upwards towards the edges. The reverse of the print is sporadically soiled with small rust-coloured deposits along the left half of the print, possibly foxing. 'CTW201007', 'P0710046 and '576' ' are written in pencil in an unidentified hand. The print is corner-mounted to card. Two hinge remnants along the upper edge and one in the centre of the print associated with previous mounting, accompanied with some loss of the upper layer of the paper.

Based in Berlin until the late 1930s, Hans Bellmer was introduced to the French Surrealists in 1934 when a series of photographs of his first Doll was shown to André Breton. Such was the appeal of the Doll to the movement’s co-founder, that a selection of eighteen photographs were published in the Surrealist review Minotaure few months later.

Initially, Bellmer used his camera as a means to document the Doll’s construction. Yet soon the photographs became more important than the sculpture itself. They didn’t just make the Doll’s reproduction in international publications possible, which was key as Bellmer’s work would have been classified as degenerate in Nazi Germany; with their narrative and staging function, photographs also opened up further voyeuristic and fetishistic possibilities.

Realising this potential, in the autumn of 1935 Bellmer completed a second Doll which was fleshier, curvier and with more flexible joints. This new Doll represented a definitive step forward in the evolution of his work. Whereas the previous Doll had been captured in simple compositions focusing on the absurdity of its nature, Bellmer placed his second Doll within a wide range of elaborate scenarios.

The present photograph depicts an early version of this Doll placed beside a tree at night. The top part of its body is formed by a second pelvis and pair of legs positioned upside-down on top of the stomach. Unlike the lower section that faces slightly to the left, the upper one is turned towards the viewer, with an emphasis on the genitals. White socks and Mary Jane shoes, associated at the time with young schoolgirls, are the only items the Doll is wearing. Its naked body is starkly lit by the flash of the camera in the surrounding darkness of a woodland.

Cinematic in its staging, the scene suggests a menacing storyline as if the photographer arrived in a crime scene just before the police. However, the specifics remain elusive and the viewer is left to guess what happened previously and what might happen next. This additional invitation to reconstruct a narrative implied by a scenery, is where Bellmer’s work from this period owes its greatest depth. In a later letter to friend, Bellmer wrote of these photographs ‘I had achieved the impossible. As for the probability or possibility of such monstrosities ever existing, my sensitivity and that of my public were the sole judges. But the shocked violence of the response proved that effectiveness could not be due to a wanton caprice; a vital chord had been struck.'

Hans Bellmer was represented at all the Surrealists exhibitions from 1935 onwards, and the larger size of this early print suggests it was produced to feature in one of them. His immigration to Paris in 1938 marked the definite end of any Surrealist artistic exchange between Germany and France during the Nazi rule. As a result, this photograph forms part of what was likely the last Surrealist series created in the country before WWII.

Only a very small number of large prints of Bellmer’s photographs, such as the one offered here, survive; those that do are usually small images from his limited-edition publications, such as Les Jeux de la poupée (The Games of the Doll) from 1949.