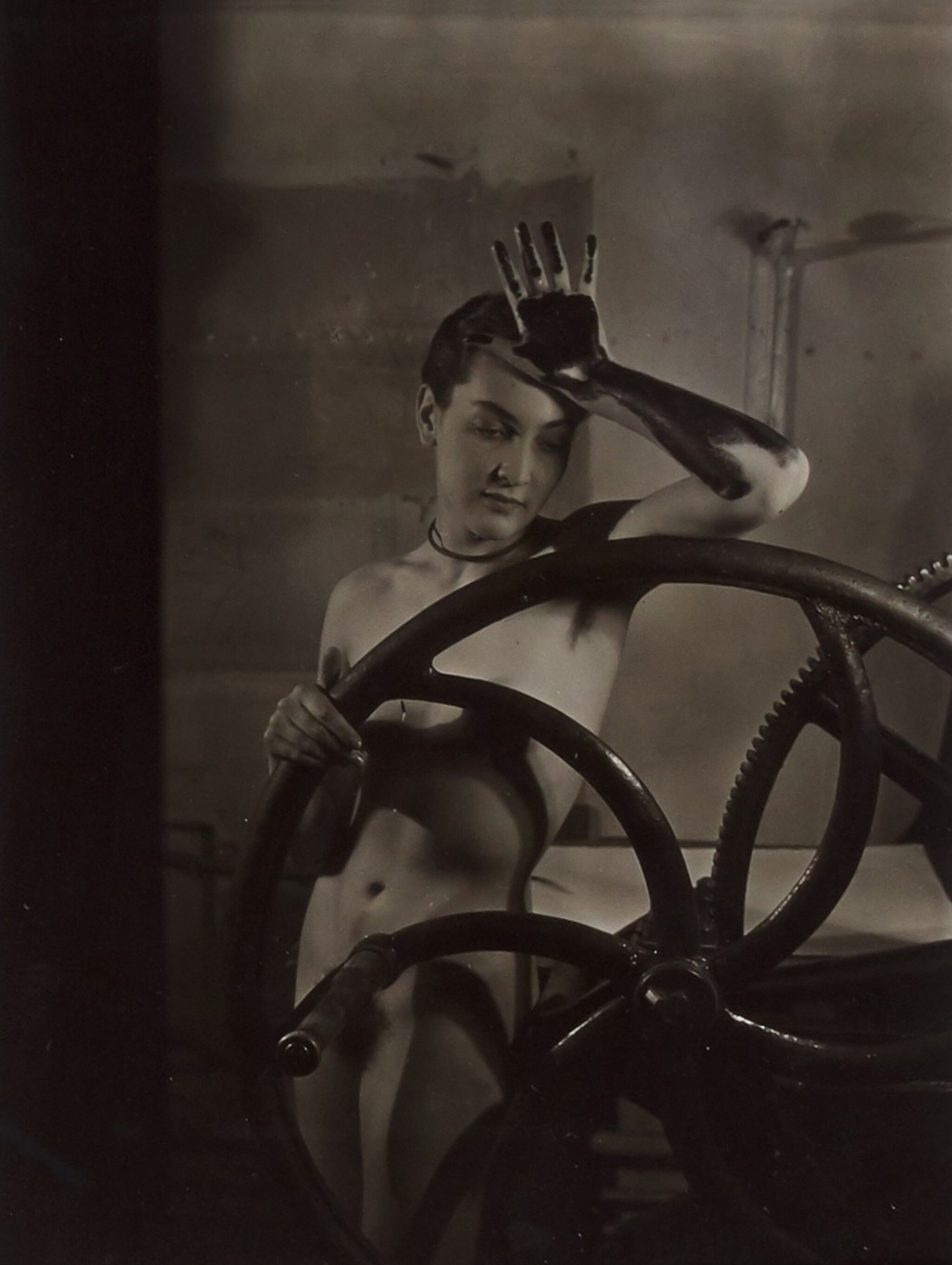 This early print is in generally very good condition. There is uniform silvering overall. Upon close inspection, in the upper margin there are impressions from a hinge remnant and a diagonal hairline scuff on the verso. In raking light, the following are visible: fingerprints in the upper left and lower right corners, pinpoint deposits of original retouching and some matte deposits in the lower area of the image, possibly a result of processing. 'A/Mo' is written in an unidentified hand in pencil on the reverse. When examined under ultraviolet light, this print does not appear to fluoresce. On the verso, two hinge remnants along the upper edge and one along the lower edge suggesting previously mounting process.

The photograph offered here forms part of a series Man Ray made in 1933 portraying Meret Oppenheim, an artist of her own right soon to be known for her Object (a fur-lined teacup, saucer and spoon). Intimate and enigmatic, the portrait not only exemplifies the Surrealist turn in photography but also challenges the traditional view of the male genius and his muse.

Born in Berlin in 1913, Oppenheim grew up in a cultural family in Switzerland with progressive views and access to an intellectual network including the eminent psychoanalyst Carl Jung. In 1932, at the age of eighteen, Oppenheim moved to Paris to study art and quickly worked her way into the inner circles of Surrealists. Through her acquaintance with the Swiss-born Alberto Giacometti, Oppenheim met Man Ray who, impressed by her magnetic charisma, lost no time in making his desire to photographer her known. The session took place at the studio of the Polish painter and engraver Louis Marcoussis in Montparnasse, resulting into a small number of photographs, one of which can be found in the collection of The Metropolitan Museum in New York.

However, it was the present image that was selected by the Surrealist co-founder André Breton for inclusion in the fifth issue of Minotaure, one of the most highly-regarded art magazines of the 20th Century, in 1934. Attesting to its importance, the image accompanied Breton’s short story La beauté sera convulsive, which declared ‘La beauté convulsive sera érotique-voilée, explosante-fixe, magique-circonstancielle ou ne sera pas’ (Convulsive beauty will be erotic-veiled, explosive-static, magic-circumstantial, or will not be at all). More specifically, it illustrated convulsive beauty’s first category, érotique-voilée, lending the image its title.

Despite its elusive interpretation of Oppenheim’s portrait, the article certainly emphasised Breton’ ongoing interest in madness and particularly hysteria. Like dreams, this condition was glorified because it seemed to unlock the deepest realm of the unconscious and enable an uninhibited mode of expression. Crucially, hysteria was thought to be uniquely female. Women were therefore deemed ‘innately surrealists’ and became objects of fascination for many male followers of Breton. While they played an instrumental role in the Surrealist revolution, women were still often reduced to the role of muse rather than seen as active participants of the movement.

Man Ray, who was no less subject than his contemporaries to this view, wrote in his autobiography that Oppenheim ‘was one of the most uninhibited women I have ever met’. At first sight, Oppenheim’s portrait has indeed all the hallmarks of an image produced to facilitate male agendas. In it, she appears nude, inked and in danger of being run through the flywheel of a printing press. Another image from the same sitting even shows her handcuffed by Marcoussis who attacks from behind in the guise of Henri Lardu, a notorious contemporary serial killer of women. This menacing narrative, intensified by the polarity of the vulnerability of the naked flesh against the metallic strength of the machine, is undoubtedly fetishising. Yet Oppenheim’s expression and gestures remain undeniably indifferent and calm. Whether partly instructed by Man Ray or not, she also appears more androgynous and less sexualised. In this way, it has been suggested, she resists becoming a blank canvas on which Man Ray could project his ideas of femininity. And it is precisely her oscillation between submission and agency that turns this photograph into one of the most nuanced and multi-layered photographic portrayals of a woman by a male Surrealist.

Striking contrasts - poetry and violence, powerlessness and authority, masculinity and femininity – are defied and cohabit within this single frame. Today, nearly 90 years after its creation, this photograph retains its arresting quality and continues to inspire many artists globally, including Zhou Tiehai and his 2006 Man Ray, Meret Oppenheim sold by Sotheby’s in 2008.

While this image has been reproduced massively, appearing from generic book covers to significant monographs of the artist, early photographs of it are extremely rare.