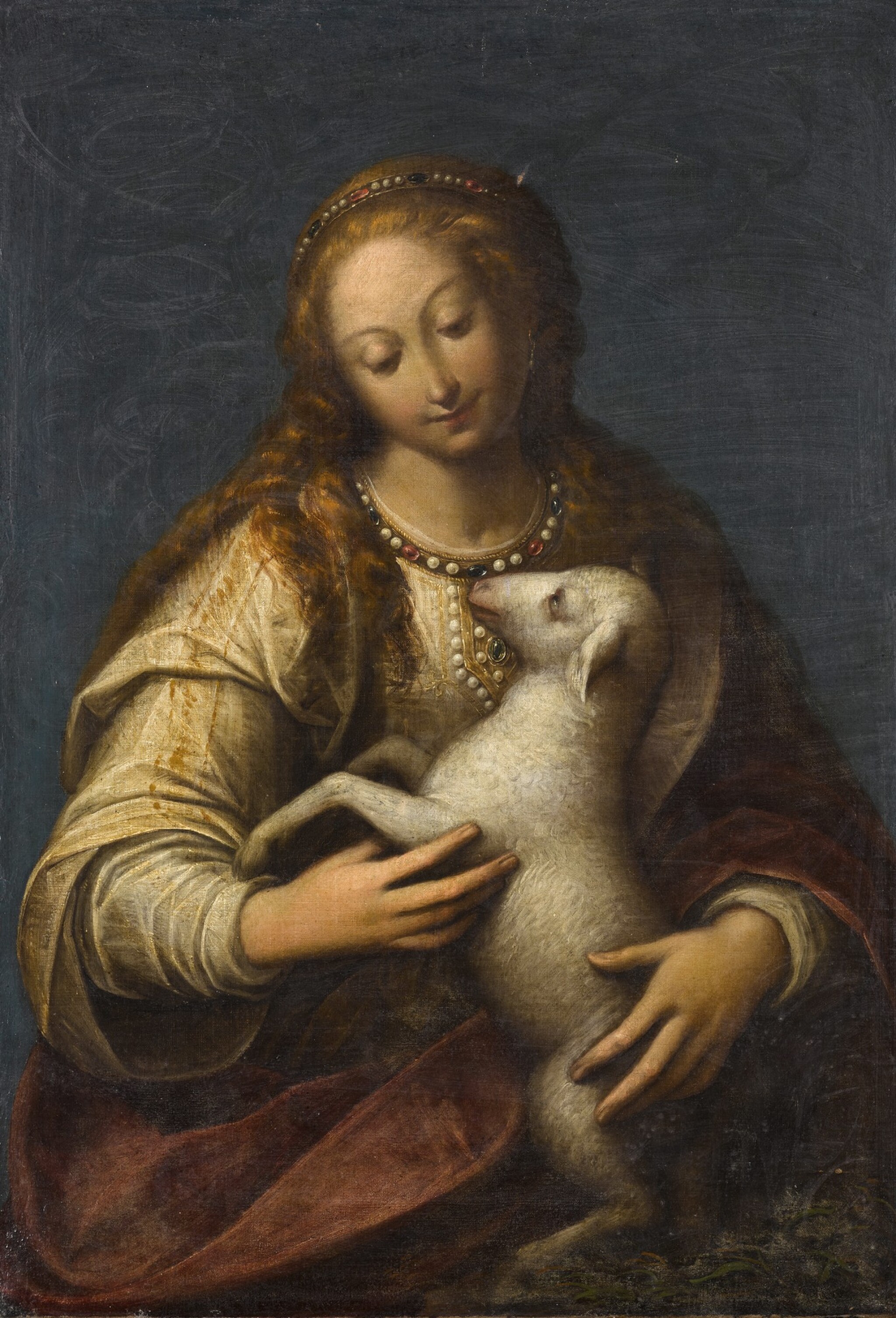 The canvas is lined, the paint surface is dirty (with obvious marks from being wiped, particularly in the background) and the varnish is discoloured. There is a small loss in the paint surface in the top right part of the saint's hair. There is a degree of wear to the canvas, most clear in the lower half, but other parts of the impasto paintwork - in the folds of the saint's sleeved and in the jewels - are well-preserved. Discoloured retouching is visible to the naked eye in bright, raking light around the margins of the canvas, through the background, in the shadow of her chin and neck, and in parts of the saint's hair, that comes over her shoulders. There are also two small retouchings to former losses in the lamb's nose and above its eye. Inspection under ultraviolet light, however, does not reveal historic intervention, as the varnish fluoresces so opaquely, making any other restoration virtually impossible to discern. The painting appears to be in fairly good overall condition, and cleaning the work would likely be transformative, but may reveal more old restoration.

Like many of the earliest known female artists of the Renaissance, Orsola Maddalena Caccia (baptised Theodora) was taught to paint by her father, Guglielmo Caccia, called Moncalvo (1568-1625), who worked largely in fresco in Piedmont. He went on to found the convent at Moncalvo, a village east of Turin, where Orsola and her five sisters moved in 1625, Sister Orsola having taken her vows at the Ursuline convent of Bianzè in 1620, aged twenty-four. At his death, Guglielmo left drawings and materials for his six daughters, and Orsola established a studio at the convent, where she was also abbess between circa 1627 and 1652, taking commissions to provide a means of support to the institution until she was in her seventies. She appears to have painted largely for local patrons, though she was clearly also known further afield, and was in touch with Scipione Agnelli, bishop of Casale (1586-1683) and a member of the Gonzaga court - indeed two of her paintings were recorded in the Gonzaga collections in Mantua in 1665. She was a prolific artist, producing both devotional paintings and spiritually-endowed still lifes.1

﻿The present painting is an early work by Caccia, heavily influenced by her father. It may even have been painted while she was still in his studio, since the inventory drawn up after his death in 1626 lists two depictions of Saint Agnes (which both also appear in the post-mortem inventory of his nephew, Angela Francesco Caccia, in 1681), which may have served as models. This painting is the prime version of a composition that Orsola went on to repeat in a later image of Saint Agnes, sold at Sotheby's, Florence, 29 October 1990, lot 612, in which the saint wears a crown of jasmine and more elaborate jewels, and is set back slightly, with flowers strewn in the foreground.