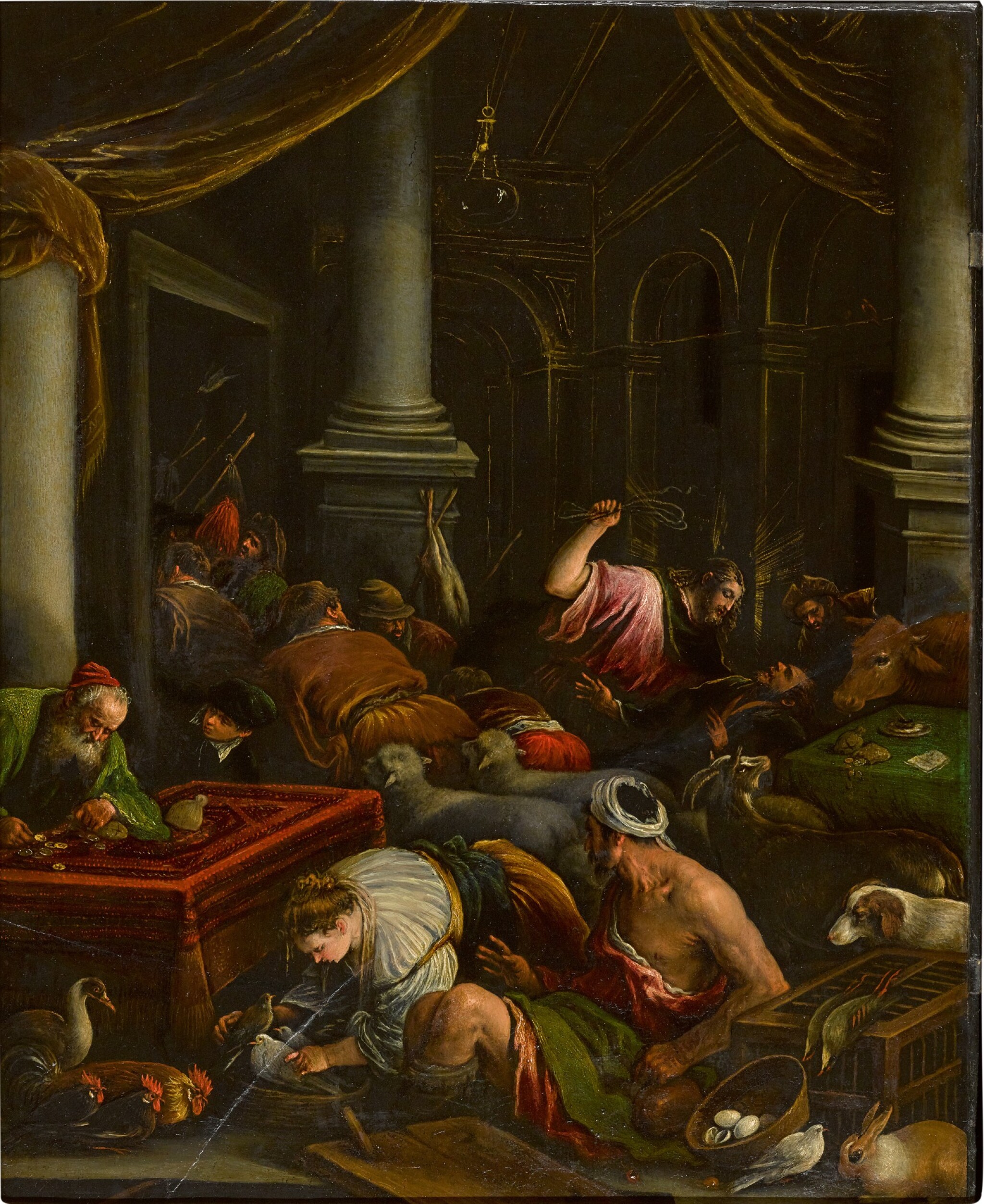 The slate slab is flat and stable. A repaired diagonal crack runs across the lower section of the composition. There is also a repaired diagonal crack which cuts across the upper left corner. The paint surface is fairly clean with a slightly discoloured varnish. Inspection under ultraviolet light reveals retouching to the aforementioned cracks. There are small retouchings scattered in the lower half of the composition, notably in the lower right quadrant. Retouchings in the upper half of the composition are mainly found in the form of tiny spots in the columns left and centre, as well as some strengthening in the shadows of the portico on the right. The painting is in overall fair condition.

This remarkable painting on slate is signed by Francesco Bassano the Younger and once formed part of the Spanish Royal collection, together with its pendant Christ on the Road to Calvary with the Veil of St Veronica, which is also signed (private collection). Francesco Bassano, eldest son of Jacopo, trained in the workshop of his father, one of the leading Venetian painters of the 16th century. Night scenes such as Christ driving the Moneylenders from the Temple contributed to the increased regard and demand for Francesco’s work, as demonstrated by this painting’s history of royal ownership.

Both this painting and its pendant are documented in Spanish royal inventories and can be identified with the pair given to Philip II, King of Spain, by the Milanese sculptor Pompeo Leoni. The paintings are listed in an inventory of works drawn up on 4 July 1600 by Juan Pantoja de la Cruz, Painter to His Majesty, following the death of the King in 1598.

The pair appears under the heading ‘Pinturas de deboción’, a section that groups them together with numerous other devotional paintings, which were housed in the King’s private oratory at the Alcázar in Madrid. The entry for Christ driving the Moneylenders from the Temple precedes the one that records Christ on the Road to Calvary;1 it reads:

The medium, subject matter, and dimensions of the paintings are accurately recorded. The inventory mentions one other painting on slate with similar characteristics, a Christ crowned with thorns, today in the Museo del Prado, Madrid.2 Given to Leandro Bassano, Francesco’s younger brother, the latter is datable to circa 1590–98.3 It shares the same support and is nearly the same size as the Christ driving the Moneylenders from the Temple and Christ on the Road to Calvary, and was also set in an ebony frame. The two pendants were valued at 100 ducats each, whereas Christ crowned with thorns was given a valuation of only 50 ducats due to its damaged condition.4 Its different authorship may also have been a factor reflected in its lower value. The inventory also provides a fascinating insight into not only how the paintings were displayed but also how they functioned as devotional images. Each of the three pictures was covered by a curtain of black taffeta, which the King would draw to reveal a single image before which he would kneel to pray.

Almost 150 years later, the pair was again recorded in a Spanish royal inventory of 1747, drawn up a year after Philip V’s death. As property of Philip V and Isabel Farnesio, Christ driving the Moneylenders from the Temple and Christ on the Road to Calvary are listed in a section devoted to ‘Pinturas qe exsten en estte oficio y Cassa del Marques de Bedmar qe no se hallan comprehendidas, en el cargo ni en el Ymbenttario del señor Carlos segundo’.5 This would seem to suggest that the paintings were not listed in the inventory of the possessions of Philip’s predecessor King Charles II (1661-1700), but rather that they passed to the office of the Marqués de Bedmar, whose hereditary title was founded by Philip III in 1614, while remaining in royal ownership.

The two pictures, distinguished by their slate supports, are recorded together as follows:

Two aspects are of particular significance. The first is that the valuation of the paintings had risen considerably: by the mid-18th century the combined value of the pair had increased to 3000 Reales. The second is that the condition of Christ driving the Moneylenders had suffered during the intervening years; the inventory record notes that its slate support was broken (‘rrotta’). The damage - a visible diagonal crack - is still evident today.

The present painting is a prime example of the devotional night scene, a visionary and highly expressive art form pioneered by Francesco and other members of the Bassano family. Painted on the refined and highly collectible material of slate, or, as it was often referred to in the inventories ‘pietra nera’, the chosen support enabled the colours to glow vividly. The vibrant reds and burnt oranges are characteristic of Francesco, as is the richly applied paint and the massing of expansive figures within the composition. This painting probably dates from the last decade of Francesco’s career.