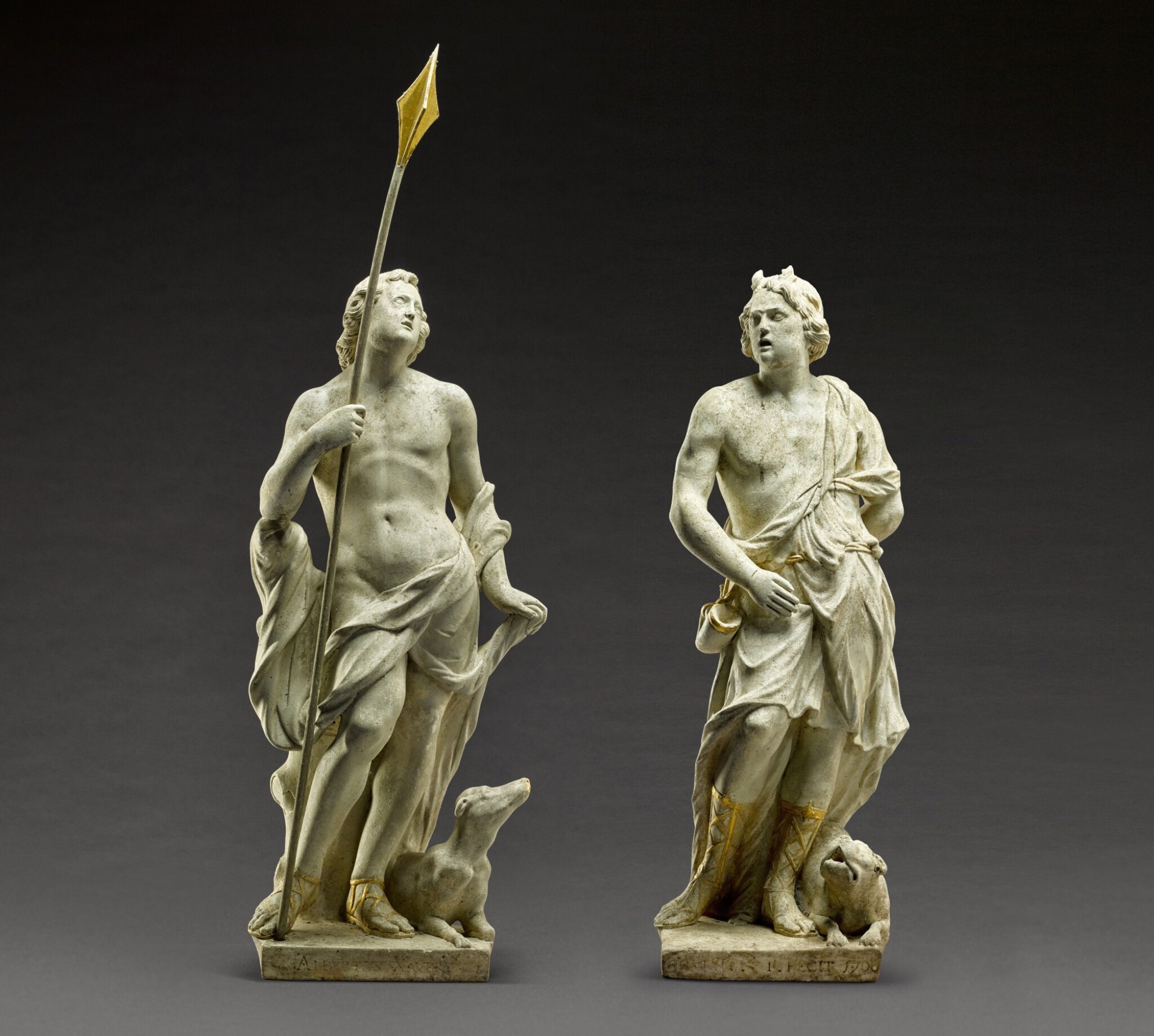 The figures are weathered due to their placement outside. As a result there are losses and flaking to the white paint and gilding, and a coarse, porous surface with minor nicks throughout. There is lichen present on the surfaces of both figures. The proper right hand of Actaeon is reattached and possibly a replacement. The wood spear is later. Otherwise the condition is good.

Please note that this lot will be sent to our Greenford Park warehouse following the sale.
Gustav Leonhardt, Amsterdam;
his sale, Sotheby's London, 29 April 2014, lot 602, where acquired by the present owner
P. M. Fischer, Ignatius en Jan van Logteren. Beeldhouwers en Stuckunstenaars in het Amsterdam van de 18de eeuw, Utrecht, 2005, p. 45 (Actaeon)
The three sculptures from the garden of Huis Bartolotti presented in this sale are by the hand of the Antwerp sculptor Albert Xavery and were published in P. M. Fisher's survey of 18th century sculpture from Amsterdam (op. cit.). The elegant mythological figures, which are united by their association with hunting, are quintessential examples of Netherlandish garden statuary from the 18th century.

Along with Alexander van Papenhoven and Jan Claudius de Cock, Albert Xavery was among a group of Flemish sculptors that forged an international career from Antwerp but decided to settle in Holland to supply its wealthy nobility and bourgeoisie with statuary.  Around 1690, Xavery based himself in The Hague and soon attracted commissions from the Royal family. He carved the statue of The Rape of the Sabine Women after Giambologna in the garden of Paleis Het Loo and personfications of Europa and Africa at Slot Zeist.

Statuary became a must-have feature of Netherlandish gardens following the French architect and furniture desginer Daniel Marot's transformation of Paleis Het Loo from 1684. The gardens of both town- and country houses were redesigned with the symmetrical sway of Louis XIV's parks and marble, stone or lead mythological characters and personifications were installed along their focal points and often arranged in a narrative sequence. These statues therefore provided delightful surprises and pleasant conversation points whilst strolling through the gardens. The ties within the present ensemble show how inspiring such gardens may have been: the goddess of the hunt Diana with Actaeon, the hunter who she turned into a stag, and Endymion, the hunter who she fell in love with as he slept.