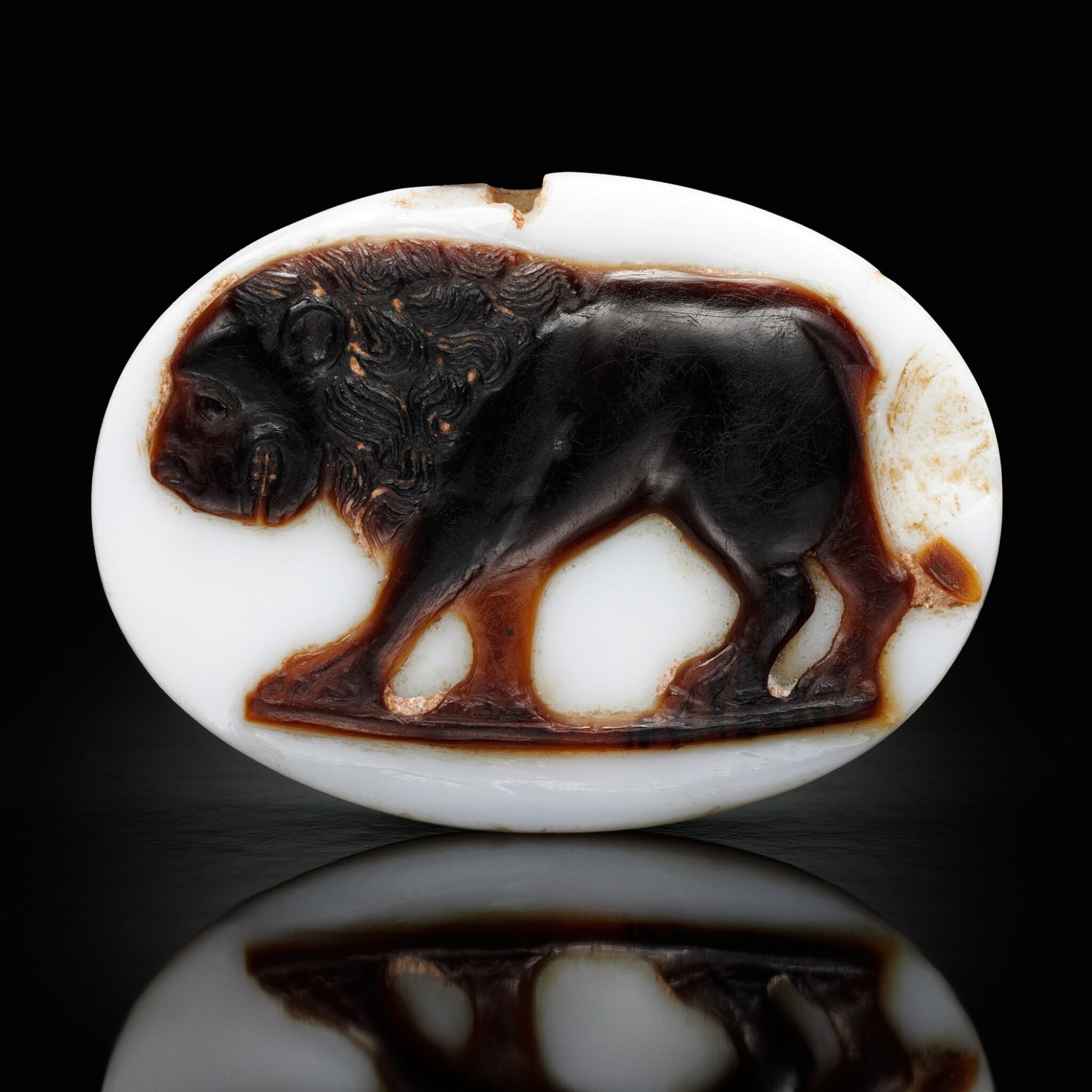 An Important Cameo with a Walking Lion

﻿Please note that Condition 11 of the Conditions of Business for Buyers (Online Only) is not applicable to this lot.

where acquired by the present owner, a distinguished private collector

This beautiful and rare cameo of a walking lion is one of a small group of gems associated with the court of Frederick II Hohenstaufen. Frederick II was the grandson of two of Europe's greatest rulers: Holy Roman Emperor Frederick Barbarossa and Roger II King of Sicily. Raised in Palermo, Frederick was fluent in six languages: Arabic, Latin, Greek, German, French and vernacular Sicilian; he probably also read Hebrew. He founded the University of Naples and cultivated an intellectual atmosphere at his court at Palermo, inviting Jewish scholars to translate texts and corresponding with foreign Muslim dignitaries. Frederick II was regarded by his detractors as 'the Antichrist', the 'limb of the devil' and the 'Punisher of the World', but has been remembered to posterity as 'Stupor Mundi': 'Wonder of the World'. Many scholars have characterised his reign as a 13th-century proto-Renaissance.

Frederick II's reign saw revived interest in gem engraving. A number of cameos dating to the first half of the 13th century have been linked to Frederick's court at Palermo. These surviving glyptics underscore Frederick's wider concern for the classical past. As Dirk Booms and Peter Higgs have argued, 'classical influence is visible in … cameos and gems that were produced at Frederick's court, again with such skill that until a few decades ago most of them were identified as being actually Roman in date. A whole array of classical and mythological scenes... which must have been known to the court and the craftsmen from ancient examples, was used and copied, and new scenes created, sometimes depicting Christian scenes' (op. cit., p. 262). The most famous of these gems is the cameo with Noah and his family entering the ark which was formerly in the collection of Piero the Gouty and his son Lorenzo the Magnificent and is now in the British Museum, London (inv. no. 1890,0901.15).

The present cameo with a walking lion compares with another circa 1230 example which was sold in these rooms on July 2020, lot 16. See also the example set into the King David Statuette in the Historisches Museum, Basel (published in Kahsnitz, op. cit., vol. 5, p. 499, fig. 378). Another similar lion cameo from the same period is in the Hermitage, St Petersburg (also illustrated in Kahsnitz, op. cit., vol. 5, p. 500, fig. 379a). A close comparison is found in another cameo with a lion (facing right) in the National Archaeological Museum, Naples, published by Giuliano (op. cit., p. 151, fig. 38). Note also the cameo with a liopart in the Suermondt Ludwig Museum in Aix-la-Chapelle (Giuliano, op. cit., p. 178, fig. 42).