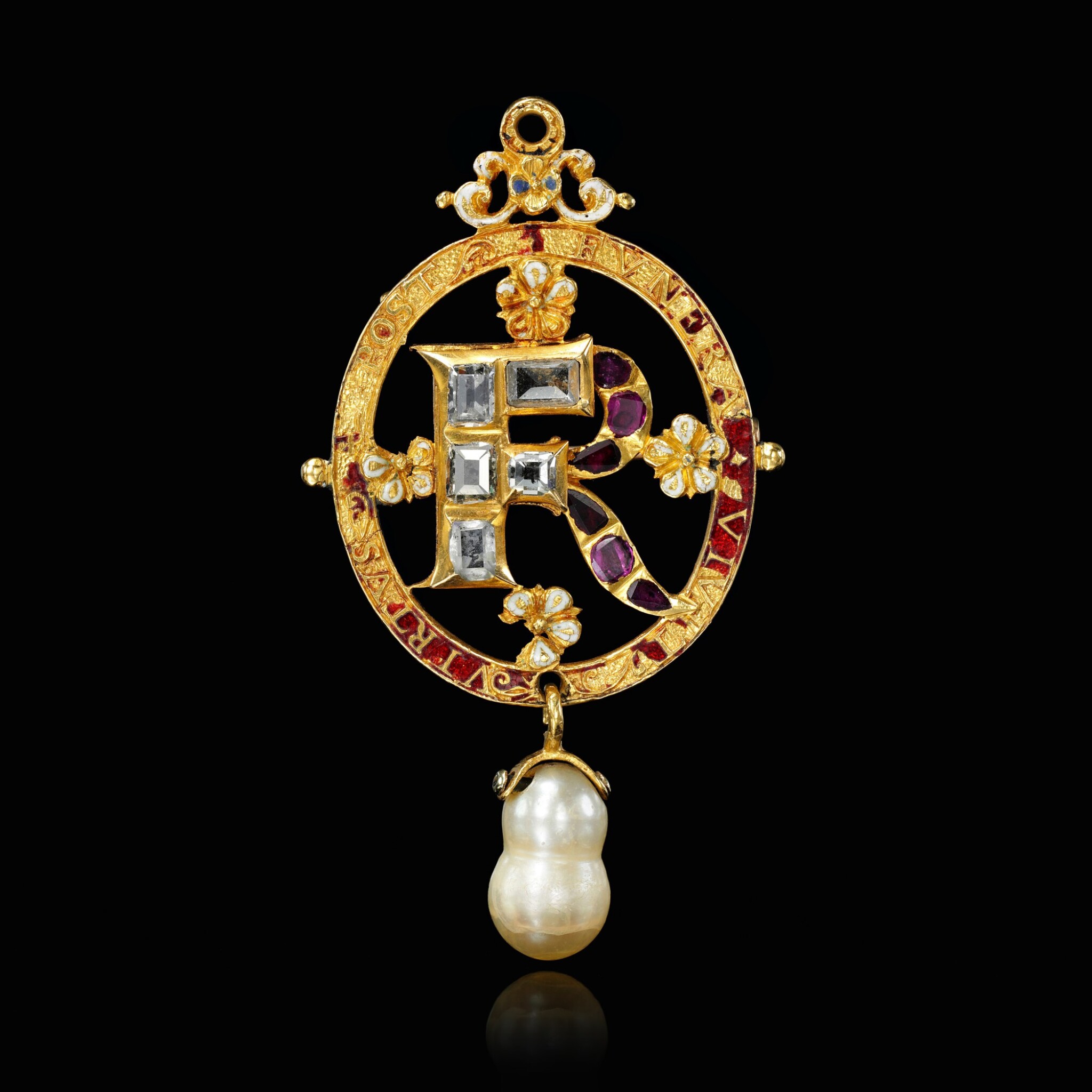 Monogram Pendant with the initials FR

partially enamelled gold, set with diamonds and rubies, with a pendant pearl, mounted as a brooch

Overall the condition of the pendant is good in consideration of its age. There is dirt and wear to the surface consistent with age. There are losses to the enamel, both to the recto and verso, and in particular to the red enamel. There is a small fissure to the border on the right side (front). One of the petals of the lower white rose is lost and also a petal is lost to the left rose. There is a later (early 20th century?) pin to the reverse, with some solder. The pearl is probably original. The 4 gold hoops to the reverse are probably original, and the jewel may have been used both as a pendant and a hat badge.

Although they have a long history, very few monogram or initial jewels have survived. However it is not only rarity which makes the FR monogram pendant so exceptional but also its power of evoking the period when England entered the modern world, -the leading personalities, the great events, and the extraordinary flowering of national literary genius. The oval pendant, c.1610, represents the change of style in jewellery from Renaissance elaboration to simplification, focusing on the stones rather than the settings, and contained in severely outlined geometric designs.  The back is as carefully worked as the front with the arcaded border and trails of foliate scrolls soberly enamelled black in contrast to the rich colours of sixteenth century jewels.

In antiquity the Greek and Roman rulers had coins struck with their initials, and the signatures of the Emperors of Byzantium continued the tradition. During the later Middle Ages monograms assumed a devotional character with necklaces, brooches and rings bearing the letter M, of which the most famous in this country is the famous Founder’s Jewel belonging to New College, Oxford. Similarly devotional in character is the Sacred Monogram, I H S, derived from the Greek name of Jesus, promoted in the mid 15th century by the preaching of St. Bernard of Siena. An example, composed of Gothic letters is displayed on her bodice by Jane Seymour in a portrait after Holbein.

As well as for Jane, Henry VIII ordered cipher jewels for himself and his other five wives. For instance, his ownership of a pomander is asserted by his diamond set crowned monogram HR with his motto Dieu et mon droit. Some jewels bear the Roman capital H, occasionally paired with that of his current wife as in a chain composed of H’s and K’s alluding to either Katherine Howard or Katherine Parr. His passion for jewellery was inherited by his children and when the widowed Philip II offered the jewels he had given Mary I to her sister, now Queen Elizabeth, “as a good brother should;” she did not refuse. This Habsburg collection included a diamond and pearl necklace composed of the ciphers P and M, presumably marking their marriage in 1553. Bracelets composed of jewelled mottoes, and the name of her suitor François de Valois, are recorded in the Queen Elizabeth’s inventory of 1587 though the well known locket ring with her diamond monogram,(c.1575), now at Chequers, is omitted.

The accession of James VI of Scotland as James I of England with his wife, Anne of Denmark, brought new life into the court, thanks to the leadership of Henry, Prince of Wales, encouraged by his jewellery loving mother and her brother, Christian IV of Denmark. Prince Henry, who was determined to revive the greatness of England, believed a show of splendour at court was an essential means of displaying monarchical power and authority. His own carefully planned appearance is illustrated by his portrait painted by Robert Peake, in which he wears Garter insignia, a beautiful Italian brocaded silk doublet, and, beside him, the ostrich plumes in his hat fixed in place by a diamond cipher H jewel, one of several listed in his inventory. Where he led others followed,using jewels and dress to display their status and taste at court. His mother, Anne, while famous for her love of pearls also made a great show of cipher jewels alluding to her mother Sophie of Mecklemberg and her brother Christian the 4th of Denmark. The quality of such jewels, mainly executed by George Heriot of Edinburgh is exemplified by the miniature case given to her young lady in waiting Lady Ann Liviston, now in the Fitzwilliam Museum, Cambridge. The soft red enamelled ground is covered with her crowned diamond cipher ARC, Esses closed or barré with an oblique line signifying “fermesse” (fidelity), and double C’s. It is to this world that the FR Monogram Pendant belongs, and although his identity remains to be discovered, the owner he can be imagined attending masques and Jacobean court festivities splendidly attired, with his cipher and Latin motto proclaiming his status, “as a gentleman…full of virtue, bounty , worth and other qualities” (Shakespeare , Two Gentlemen of Verona).

This exquisite monogram jewel is emblazoned with the initials: FR. With the diamond set F overlapping the ruby set R the pendant immediately recalls the famous 16th-century Chequers Ring, in which diamonds and rubies form the letters E(lizabeth) and R(egina). The Chequers Ring opens up to show portrait miniatures of Queen Elizabeth I and her mother Anne Boleyn. It is reputed to have been gifted by King James I to Lord Home in 1603 and was later acquired by Viscount Lee of Fareham who gifted it to the nation (Scarisbrick, Ancestral Jewels, op. cit., pp. 30-31).

The openwork facture of the FR Monogram Pendant nevertheless indicates a probable dating to the early 17th century. There is a notable similarity to the famous Lyte Jewel in the British Museum (Waddesdon Bequest, inv. no. WB.167) which is prominently emblazoned with the letter R. The openwork design and the use of red, blue and white enamel is also close to the FR Monogram Pendant. The Lyte Jewel includes a portrait miniature of James I by Nicholas Hilliard and was presented by the king to Thomas Lyte of Lytes Cary, Somerset, in gratitude for writing a genealogy which linked James to Brute, mythical founder of Britain (see Thornton, op. cit., pp. 234-241).

The identity of the holder of the initials F.R. is unknown. It is tempting to speculate whether they could refer to Frederick II of Denmark (1534-1588) whose daughter Anne of Denmark (1574-1619) married James VI of Scotland (and later James I of England) in 1589, a year after her father's death. The F.R. pendant could have been made in Anne's court following Frederick's death. The inscription vivit post funera virtus (which translates as Virtue outlives death) potentially suggests that the jewel had a commemorative function. The initials could also refer to a member of a high ranking noble family such as the Russell family. Francis Russell, 4th Earl of Bedford (1587-1641), a prominent figure during the reigns of James I and Charles I, was a patron of Inigo Jones, who was response for Covent Garden piazza and church of St Pauls.