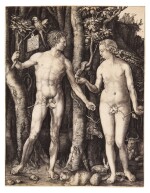 Engraving, 1504, a very fine, black Meder a impression of the third (final) state, printing with clarity and strong contrasts, the nudes resplendent against the rich depths of the forest, the trees displaying a strong plastic effect, on fine laid paper with a Bull's Head with Triangle and Flower watermark (M. 62), framed

The present impression is superior to the Nollekens impression, also Meder IIIa, at the British Museum.

To request a Condition Report for this lot, please contact Charlotte.North@sothebys.com

Tackling a tale as old as time, Albrecht Dürer re-invented Adam and Eve for his Renaissance audience, transporting the pair physically and temporally from the Garden of Eden to a wild Germanic wood. Against the ominous background of impenetrable trees and foliage, the exposed nudes seem surprisingly comfortable. Standing at ease in contrapposto, they recall the classical statues of Venus and the Apollo Belvedere, a nod to Dürer’s early Italian sojourn.

Between the pair, the Tree of Knowledge creates a distinct divide: as Eve reaches for the forbidden fruit at right, Adam commands attention at left, holding on to the branch of a Rowan tree, known as the Tree of Life. The parrot above him symbolizes wisdom, counterbalancing Eve’s serpent, a symbol of betrayal. Dürer judiciously placed such flora and fauna throughout his composition, creating both physical and allegorical equilibrium. Between the couple’s feet, for instance, a cat and mouse coexist harmoniously, blissfully ignorant of the predator-prey model. As soon as Eve accepts the serpent’s offering, this tender balance will be destroyed.

The animals Dürer selected to populate his Germanic Eden are associated with the four ‘humours’, or human temperaments, which fascinated his peers. The imposing elk emerging from the trees is associated with melancholy, while the robust ox at right represents the phlegmatic. The rabbit behind Eve symbolizes the sanguine, and the aforementioned cat is linked to the choleric. Though this humanist philosophy was widely debated amongst the artist’s contemporaries, all could agree that the mountain goat teetering on the cliff at right symbolized lust and doom – a sign of things to come.

Adam and Eve stands out in Dürer’s printed oeuvre as one of his most complex images, and best displays his technical virtuosity as an engraver. There are three states of this subject, plus a trial proof housed at the British Museum, and numerous preparatory drawings. Each of these iterations of the design chronicles the careful planning that went into the creation of this print. Proud of the final composition, Dürer claimed ownership on the tablet above Adam’s shoulder, adding, “Albrecht Durer of Nuremberg made this 1504 (Albert[us] Durer Noricus faciebat 1504)”.

The present impression, a very fine, black Meder a impression of the third (final) state, is a superb example of the artist’s final design. Printing with astonishing clarity and contrasts, the depths of the forest are as rich as the nudes’ bodies are luminous. This balance of extremes complements the thematical and compositional focus on equilibrium. Every fine line is pronounced in this example, which is superior to the Nollekens impression at the British Museum. With even the delicate whiskers of the mouse printing clearly, one can truly appreciate Dürer’s attention to detail.