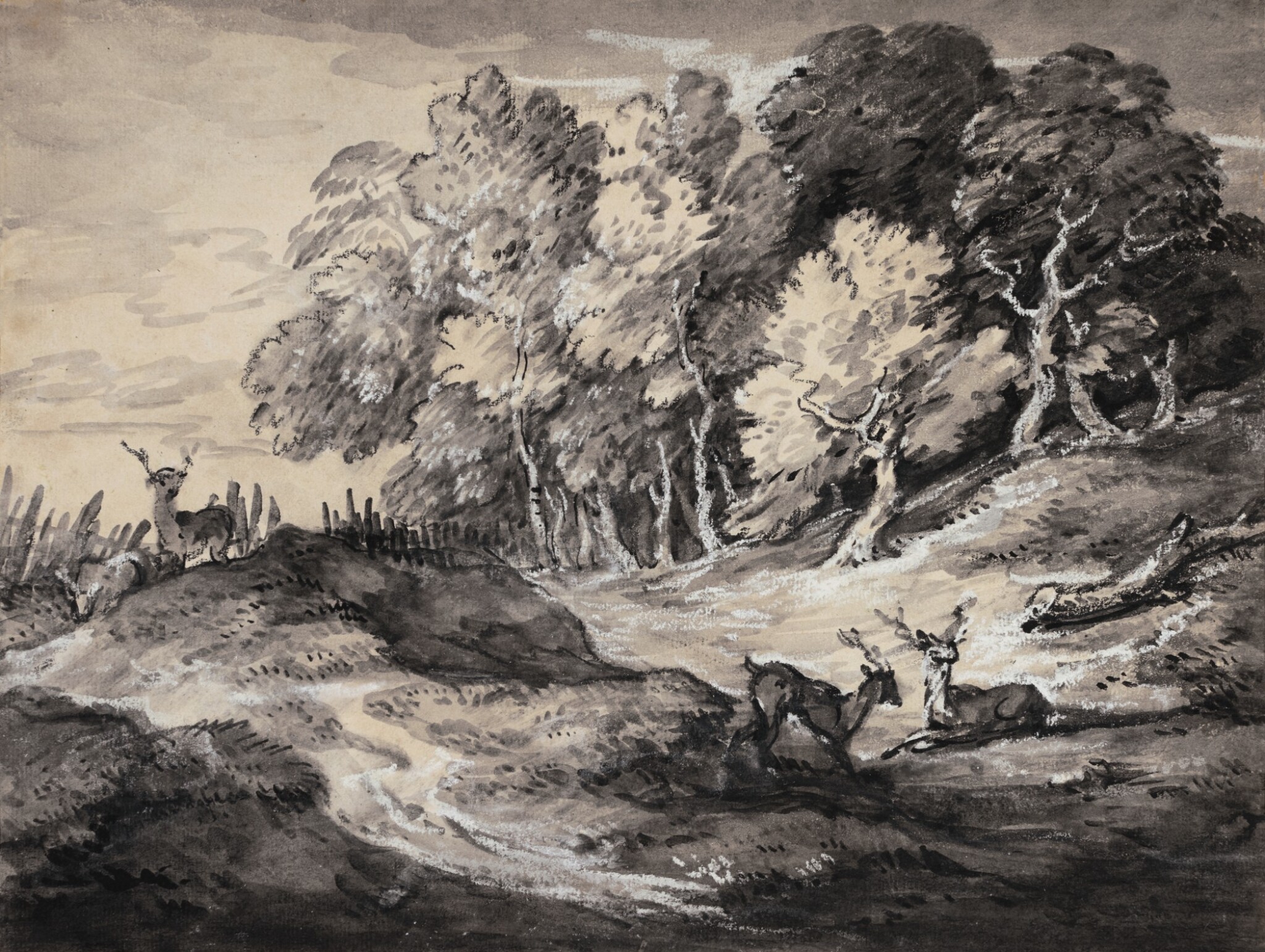 Gray and gray-black washes and black chalk, heightened with white on laid paper

The medium remains very well preserved. The paper has darkened somewhat but the overall impression of this work is very good.

This and the following lot represent two very fine examples of Gainsborough’s approach to drawing in the late 1770s. As well as his continued admiration for the pastoral sublime, the works demonstrate the virtuosity of his technique, which is painterly, free and bristling with energy.

Gainsborough regarded his drawings as finished works of art in their own right and they were much admired by his contemporaries. His friend William Jackson (d. 1803) went as far as to declare that ‘if I were to rest his [Gainsborough’s] reputation upon one point, it should be on his drawings. No man ever possessed methods so various in producing effect, and all were excellent.1 In spite of this, Gainsborough never actually sold a drawing, preferring instead to create these works purely for his own pleasure, and only occasionally presenting them as gifts to friends, favored patrons and members of his family.

Both these drawing have a long and distinguished history. Their first recorded owner was George Richard Savage Nassau (1756-1823), a bibliophile who was the grandson of Frederick, 3rd Earl of Rochford and son of the Hon. Richard Savage Nassau who sat to Gainsborough in circa 1757.2 The year after George Nassau’s death, in 1823, his library and collections were sold at Evans'. The sale contained 4,264 lots. Lot 351 comprised three Gainsborough drawings in a single frame, the present work, the drawing presented as lot 85 in the current sale and a third landscape.3

The lot was acquired by George Granville-Leveson-Gower, Earl Gower (1786-1861), a politician and senior nobleman. His father, George Granville Leveson-Gower, held the title of 2nd Marquess of Stafford and was understood to be the richest man in Britain. In 1833, William IV created him 1st Duke of Sutherland. His wife, and Earl Gower’s mother, Elizabeth, also descended from an ancient and important family and was the 19th Countess of Sutherland in her own right.

On his father’s death in 1833 Earl Gower became the 20th Earl of Sutherland and 2nd Duke of Sutherland. He devoted much of his life to the arts, commissioning the architect Sir Charles Barry to make extensive renovations to Dunrobin Castle, his ancestral home in the Scottish highlands, as well as charging him with the task of remodeling his seat in Staffordshire: Trentham Hall, and his residence in London: Strafford House.

In 1823 he had married Lady Harriet Howard (1806-1868), daughter of the 6th Earl of Carlisle and the couple went on to have eleven children. These two drawings, the present lot and lot 85, have passed through four generations of the duke’s family until today.