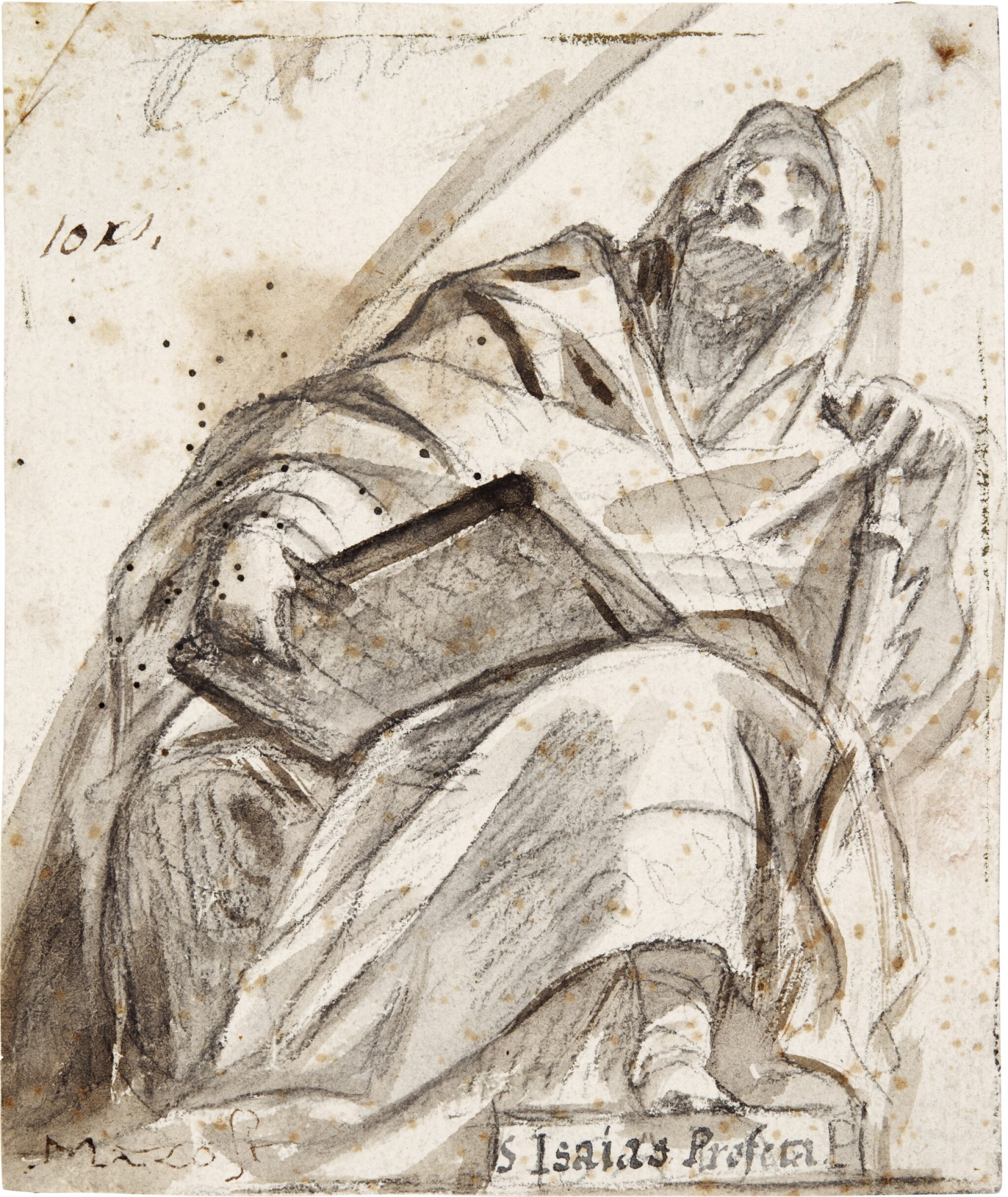 inscribed with the point of the brush and grey ink: S Isaias Profeta, and bears old attribution in pen and ink: ?Mazo f and upper left 10 rs [reales] and in pencil Isaia

Laid down and hinged at the top. A light brown stain to the left over part of the arm. Top left corner missing and two pin point holes over the right top margin and a small stain. Light foxing and brown tiny stains perhaps insect dropping to the right center. Media still very strong

Félix Boix Collection, Madrid;
private collection, Barcelona;
with Ruiz Linares Anticuario, Granada,
where purchased by the present owner in 2002
W. Vitzthum, Cento disegni napoletani sec. XVI-XVIII, exhib. cat., Florence, Uffizi, 1967, p. 61, reproduced;
W. Vitzthum, Il Barocco a Napoli e nell’Italia meridionale. Milan 1971, p. 91, reproduced p. 75, fig. 27 (enlarged)
A typical work from Giordano's Spanish period, this drawing is characterized by geometric forms and by intelligent and quick abbreviations.  It was first attributed to Giordano by Walter Vitzthum in 1967 (see Literature).  Executed primarily in black chalk enhanced by luminous nuances of wash in shades of grey and light brown, it shows an economy of line strengthened by the strong contrasts of light and shade that make the artist's studies of this type especially powerful.  In the early 1690s Giordano was drawn to Spain by the patronage of Charles II, and the sovereign's desire to complete the decoration of the magnificent monument of El Escorial.  This sheet belongs to a group of drawings related to Giordano's decorations of the vaults in the basilica of St. Lorenzo.

This was a vast project which Giordano started after frescoing the 'Escalera' in September 1692.  These frescoes on the vaulted ceilings, to which this study relates, were not conceived at the same time and contemporary accounts of Giordano’s activity in Spain reveal that while executing a composition in one vault, Giordano was at the same time presenting drawings and oil sketches to the king and his advisers to convey his pictorial ideas for the next composition.  After completing the presbytery in October 1693,  he was engaged in 1694 on the decoration of the two transepts, frescoing two magnificent vaults celebrating the history of Israel.  The scenes in the vault to the right include The Crossing of the Red Sea by the Israelites and The Journey to the Promised Land, Moses with his People, Elias Comforted by the Angel.  The lunette to the right contains the figures of Betzalel and Eliab, the architects of the Ark of the Covenant.

The present sheet relates to the figure of Eliab.  The pose and the marked foreshortening are perfectly in keeping with the figures finally used by Giordano for this lunette.  A similar study representing Eliezer and Gershom, Moses's sons, related to the opposite lunette, was in the Adrien collection.1