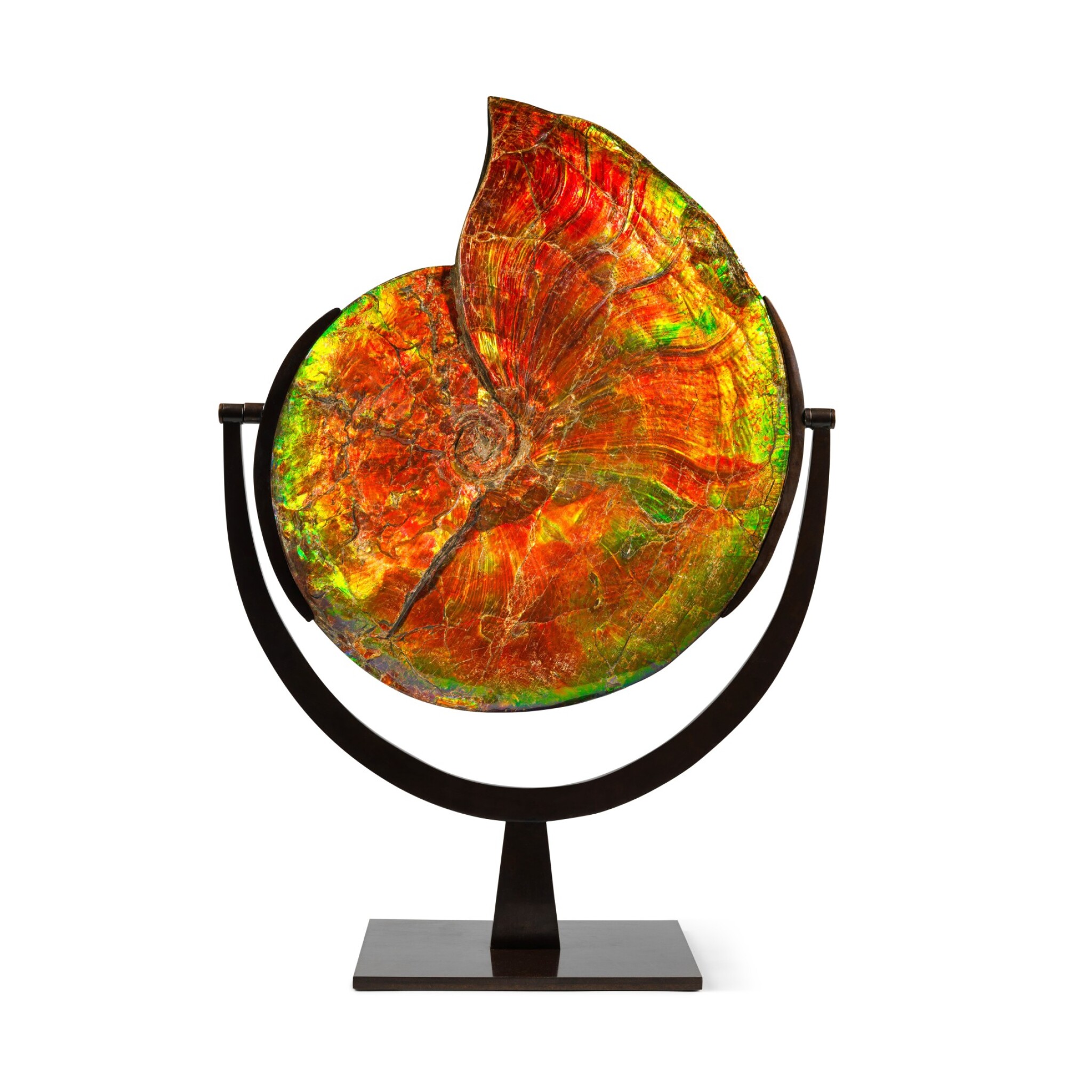 This exceptional specimen displays superb mineralization in ammolite on both faces, one with shimmering and iridescent reds, golds, and greens, the other with a rainbow of blues, greens, yellows, purples, deep browns, and tan. The colors shift in hue and intensity as they diffract light from different viewing angles.

An exceptional, large iridescent ammonite with superb mineralization in ammolite.

Placenticeras (aka "flat horn") was a fast-swimming, carnivorous cephalopod—the taxonomic class that includes today's octopus, nautilus, and squid. Much like a submarine, these ammonites employed gas and fluid-filled chambers to regulate their position in the water column. The animals themselves lived only in the outermost compartment, employing their tubular siphuncle to connect its chambers along their shell's ventral surface.

While dinosaurs ruled the land during the Late Cretaceous, the ammonite Placenticeras (aka "flat horn") could be found flourishing in oceans worldwide. However, the vast majority of this species took up residence in the Western Interior Seaway, an ocean that cut North America in half from the Arctic Circle to what is now the Gulf of Mexico. In ideal preservation circumstances, a recently-deceased ammonite would sink to the bottom of this sea and become covered in sediment. Over time, its muddy tomb would eventually be converted to shale, and it is these ancient shale deposits of the Canadian Rockies that yield the world's most significant—and only gem-quality—ammolite deposits.

Along with amber and pearl, ammolite is one of the world's few biogenic substances. Resembling the inorganic opal, it is found exclusively in the shells of ammonites that have undergone the fossilization process known as permineralization.

The quality of gem ammolite is determined by a number of factors, with the first and most obvious being its number of primary colors—reds and greens are somewhat common, while blues and purples appearing much more rarely. Also of great significance is the range of the ammolite's chromatic shift, graded by the way its colors change in hue and intensity as they diffract light when viewed from different angles. Lastly, an ammolite's magnitude of iridescence also impacts its quality and worth, with the finest specimens displaying large and uninterrupted swaths of lustrous, rainbow-like colors. On all of these metrics, this ammolite specimen ranks exceptionally.

A stunning example from Canada's world-renowned Bearpaw Formation, the Placenticeras meeki offered here is a literal shimmering example of one of the finest ammolite fossils ever brought to market.