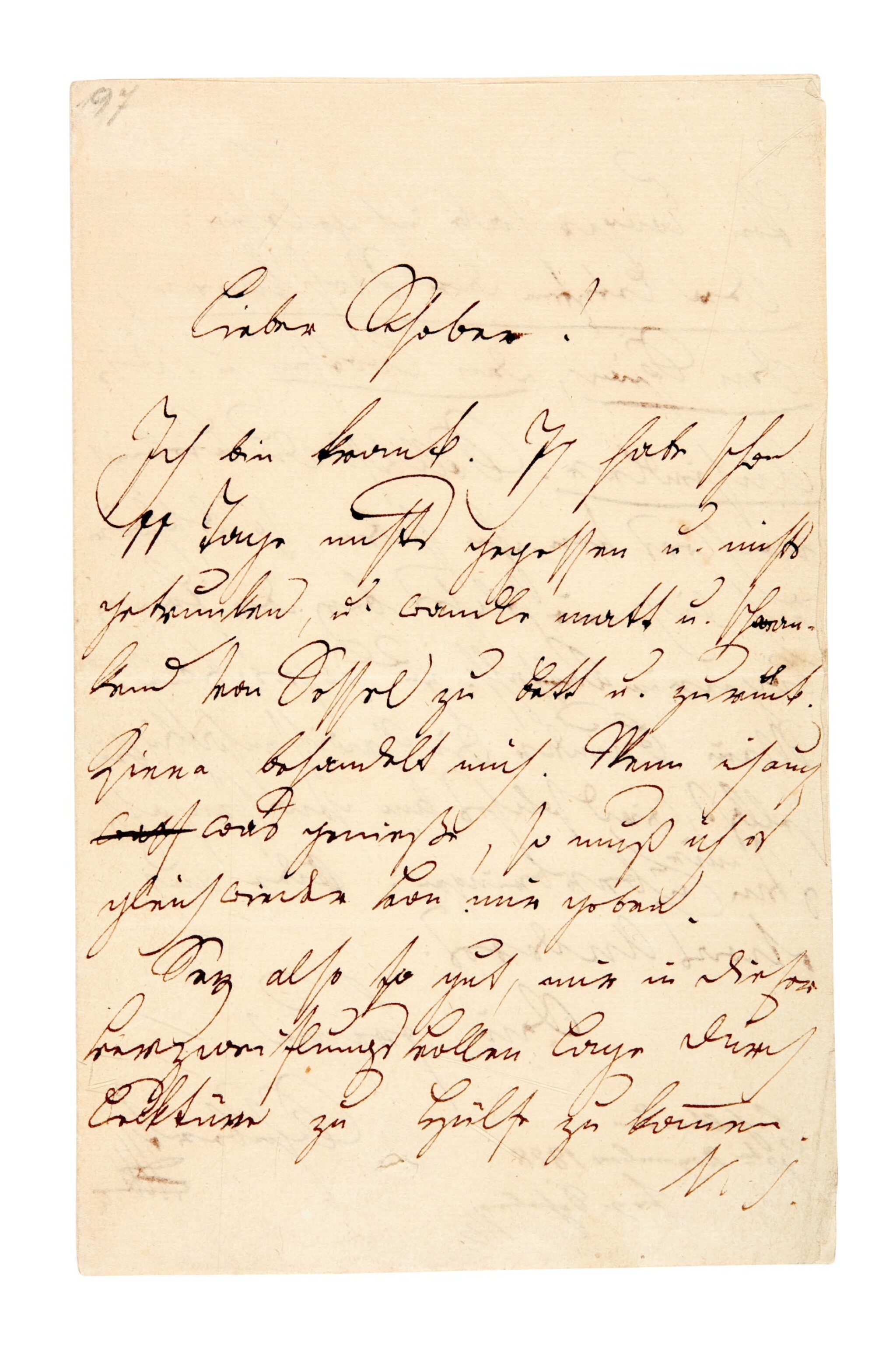 stating simply that he is ill and has not eaten anything for eleven days, describing how he staggers feebly and unsteadily from chair to bed and back again, informing him that [Dr.] Rinna is treating him, and that when he manages to eat anything he just brings it up again straight away; in the second part of the letter Schubert makes a request to Schober for reading material to help him in his desperate situation, noting that he has read by [James Fenimore] Cooper The Last of the Mohicans, The Spy, The Pilot, and The Pioneers, and pleading with him, should he have anything else by him, to leave it for him at Bogner's coffee-house, drily telling him that his brother, who is conscientiousness itself, will most conscientiously bring it over to him, adding that anything else would do too

WRITTEN SHORTLY BEFORE THE COMPOSER'S UNTIMELY DEATH AT THE AGE OF 31, THIS LETTER IS ONE OF THE MOST POIGNANT DOCUMENTS BY A MUSICIAN EVER TO BE OFFERED AT AUCTION.

IT IS UNQUESTIONABLY THE MOST IMPORTANT SCHUBERT LETTER TO BE AUCTIONED IN RECENT TIMES, AND IS ONE OF THE MOST SIGNIFICANT LETTERS BY ANY COMPOSER REMAINING IN PRIVATE HANDS.

The history of music is strewn with the names of composers cut down in their youth or younger years - Purcell, Pergolesi, Mozart, Bellini, to list only a few. But it is perhaps the case of Schubert, who died just two months before his thirty-second birthday, that inspires the most regret for what might have been composed. As Grillparzer's famous epitaph on Schubert's grave monument put it: "The art of music has entombed here a rich treasure but even fairer hopes". But this is not to deny Schubert's staggering achievements in the areas of orchestral music, chamber music, piano music and, of course, the German lied. Indeed, the eleven months preceding the writing of the present letter witnessed the composition of some of Schubert's very greatest works, including the Fantasy in F minor for piano duet, D. 940 (January-April), the sublime three last piano sonatas, in C minor, A, and B flat, D. 958-960 (September), and the great String Quintet in C, D. 956 (September-October), whose by-turns unearthly beautiful and volcanic slow movement drew from Artur Rubinstein and Thomas Mann the desire to die while listening to it. As a period of miraculous creativity, Schubert's last months, particularly, have few equals in the history of music.

Much in Schubert's private life remains a mystery, and it is perhaps fitting that the composer's last letter should be addressed to the somewhat ambiguous figure of the sometime actor, lithographer and poet Franz von Schober (1796-1882), one of Schubert's closest friends, and under whose charismatic, perhaps even pernicious, spell the composer had fallen following their acquaintance in 1815. A dabbler in the arts, probably an enthusiastic opium-smoker, and also the author of the bungled libretto of Schubert's opera Alfonso und Estrella (1821-1822), he was the keeper of many of the composer's secrets. Whether in fact he complied with Schubert's desperate appeal in his letter for more reading matter by the American author James Fenimore Cooper (1789-1851), whose historical romances depicting frontier and Native American life were then very popular, is not known. It appears however that Schober did not visit the composer himself in his last days, perhaps out of fear of infection, perhaps because Schubert had failed to visit him during an illness of his own two years earlier.

In a life as famously 'uneventful' as Schubert's, the state of his health and tragic demise on Wednesday, 19 November 1828, a week after the present letter, naturally loom large. The composer's death certificate stated that he had died of Nervenfieber (nervous fever), which in German-speaking lands was synonymous with typhus. Today, however, there is some consensus that Schubert, at the end of his life, was likely suffering from bacterial typhoid fever, whose initial symptoms may have been mistaken for those he was already experiencing as a result of the syphilis infection he had acquired at the end of 1822. By the end of 1828 it is probable that Schubert was in the final, tertiary, stage of the disease, although this was not the direct cause of death. Already by August 1828 Schubert had been feeling sufficiently unwell to consult his own doctor, the distinguished court physician Ernst Rinna von Sarenbach, personal medical advisor to the emperor Franz, who recommended that the composer move to his elder brother Ferdinand (1794-1859), mentioned in the letter, and with whom Schubert had a close relationship, in the supposedly healthier Vienna suburb of Wieden. On 31 October Schubert felt ill after dining on fish at the tavern Zum roten Kreuz. On 3 November he attended a performance of a Requiem by his brother, and the following day famously took his sole counterpoint lesson with Simon Sechter. Soon after this Schubert retired to his bed, exclaiming that there was nothing wrong with him, 'only I am so exhausted that I feel as if I were going to fall through the bed'. From either the 11th of November, according to his friends Spaun and Bauernfeld, or the 14th, according to Ferdinand Schubert, the composer finally took to his bed, being nursed by his 13-year-old half-sister Josefa and his brother's wife Anna. On the 16th a sick-bed conference was held between the physicians Johann Wisgrill and Josef von Vering, the latter having taken over Schubert's treatment after Rinna himself fell ill. Spaun reports at this time Schubert's periods of violent delirium. On 18 November the composer had to be physically restrained in his bed, at one point raising his arm to the wall and exclaiming "Here, here is my end!". The following day, by 3pm, Schubert was dead.