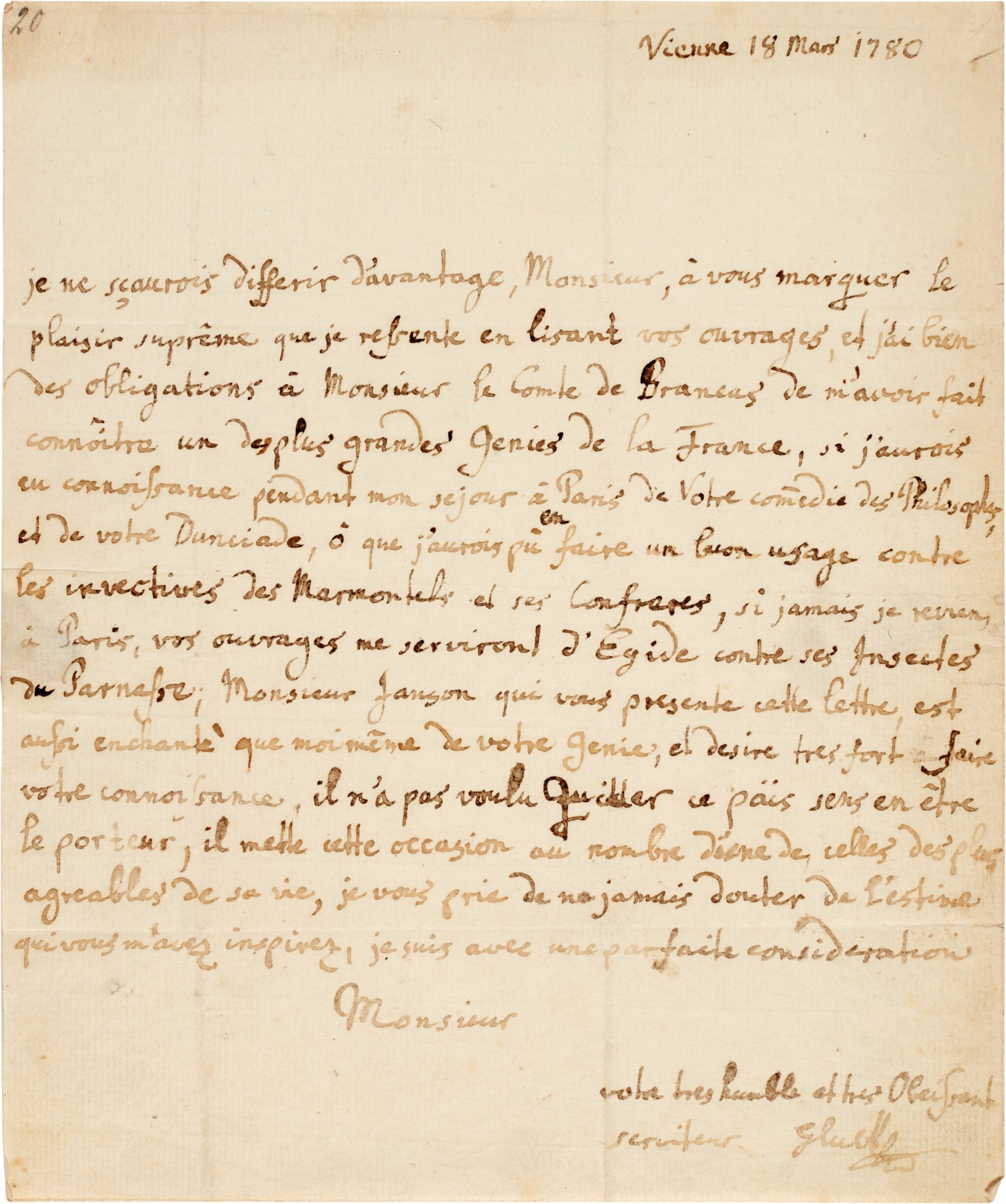 in French, discussing the culture war being waged against him by Jean François Marmontel and his allies, expressing his delight at being introduced to Palissot, surely one of France's greatest geniuses, and opining that, had he known of his satirical comedy Les philosophes and his La Dunciade, he would have made good use of them defending himself against the invectives of Marmontel and his colleagues and, if he returns to Paris, they will serve as his aegis in any future battles with such literary "insects"; at the end, Gluck refers to the bearer of his letter, the cellist Joseph Jansen, who did not want to leave without fulfilling this commission for him and begs Palissot never to doubt the esteem that he has inspired in him

This is an important and revealing letter about Gluck's experience at the centre of the disputes between the respective merits of French and Italian opera in Paris in the 1770s. Autograph letters by Gluck written in French are rare at auction: nearly all those that have been offered are to Franz Kruthoffer, written in Germanic script. The recipient of this letter was the French playwright and satirist Charles Palissot de Montenoy (1730-1814), whose 1760 comedy Les Philosophes and 1764 poem La Dunciade were intended as an attack on the sterility of philosophical language, as represented by Diderot and the "philosophes".

Christoph Willibald Gluck (1714-1787) was one of the great reformers of eighteenth-century opera, celebrated for Orfeo ed Euridice, composed for Vienna in 1762, but equally important for those he wrote for Paris: Iphigénie en Aulide (1774), the French version Orphée et Eurydice (1774), Alceste (1776), Armide (1777) and Iphigénie en Tauride (1779). The advances he made in his Italian operas in Vienna had offended devotees of vocal virtuosity and ornamentation; similarly he faced criticism in 1774, when tackling French serious opera, making "Germanic" demands on the orchestra and chorus, incorporating regular "Italianate" phrase-structures, sidelining divertissements, and attempting to make French texts suitable for opera. Among the opposition were not only supporters of traditional French opera, who rejected Gluck's synthesis as a model for its continuation, but also enthusiasts for Italian opera, such as Marmontel. Gluck's opponents eventually brought the leading Neapolitan composer Niccolò Piccinni to Paris, in order to demonstrate the superiority of Italian opera. The French literary establishment was soon embroiled in a characteristic dispute about the merits of French and Italian opera: between the "Gluckists" and the "Piccinnists". Neither Gluck nor Piccinni took part directly, being simply victims of partisan attacks.

Jean François Marmontel (1723-1799) was a leading protagonist in the "Querelle des Gluckistes et des Piccinnistes". He championed Piccinni to the extent of writing librettos for him, notably Roland (1778) and Atys (1780), together with three more during the 1780s. He also launched a furious attack on Gluck, the Essai sur les révolutions de la musique en France (1777). This broadside on Gluck's new French operas, together with others by Jean François de La Harpe, led to the composer's virtual retirement to Vienna in the autumn of 1779. He toyed with the idea of returning to Paris, but his declining health prevented any prospect of such a return.