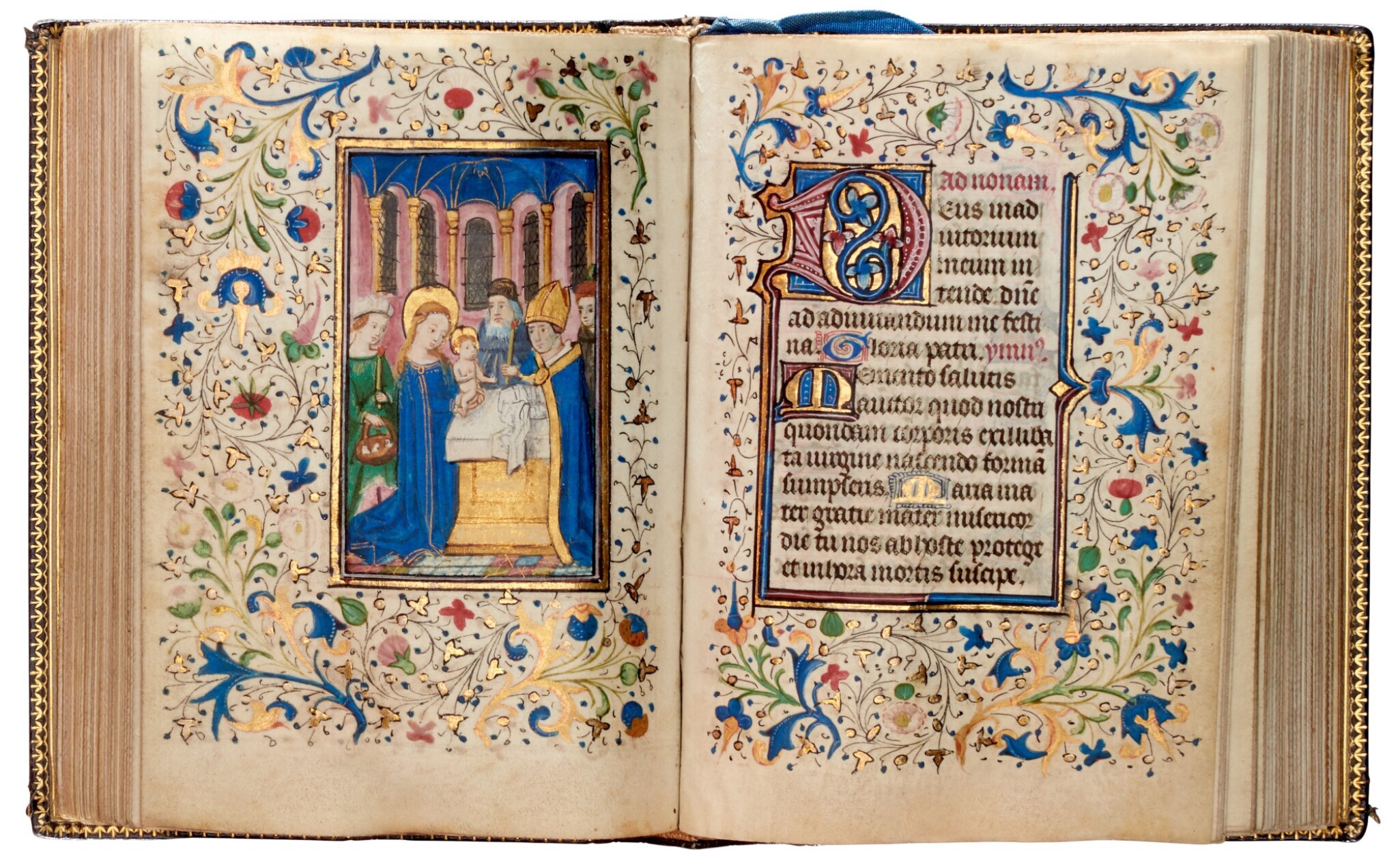 Book of Hours, Use of Rome

iii + 236 + ii leaves, c.97×70 mm; ruled in red ink for 15 lines per page (ruled space c.51×32 mm); ILLUMINATED WITH THIRTEEN FULL-PAGE MINIATURES SURROUNDED BY FULL BORDERS on inserted leaves, blank on the recto, four of them modern, others missing, large foliate initials with full borders facing each miniature and at the beginning of other major texts (which probably once faced inserted miniatures), small illuminated and flourished initials throughout. Bound in Paris c.1830s–‘40s in full fine-grained black calf, the understated exterior contrasting with the gilt filigree borders of the vellum pastedowns, signed on the turn-in BY TRAUTZ-BAUZONNET, the spine with gilt title ‘Hore Virginis’, edges gilt and gauffered; in a brown calf slip-case and conservation box

1. Doubtless written and illuminated at Bruges, and certainly originally bound there: the original front pastedown is preserved, and bears the FORMAL INSCRIPTION OF THE ORIGINAL BINDER: ‘Johannes Lecat me ligavit in Brugis’ (fol. iii verso). In 1454 Bruges bookbinders were incorporated with booksellers, stationers, scribes, and illuminators into the Guild of St John the Evangelist, so their names are recorded, and the accounts of Jan de Cat / le Cat / Lecat, who was Dean of the Guild 1485–86, survive. W.E.J. Weale, who studied and published the guild documents in the 1860s, later wrote that none of his bindings are known to have survived (Bookbindings (London, 1898), p.liv). The book can certainly be dated after 1450 by the inclusion of St Bernardino in the calendar (21 June), and it was probably WRITTEN FOR AN ITALIAN PATRON to judge by the very unusual inclusion of St Mustiola of Chiusi (3 July) in the calendar, and the added prayer.

The subjects of the miniatures are:

6. (f.92v) Annunciation to the Shepherds

7. (f.98v) Two angels holding a bird-cage with open doors, above a scroll inscribed ‘Anima nostra sicut passer’ (Psalm 123:7, ‘Our soul, like a sparrow [has been snatched away …]’), with demons catching one bird in a net, and a female saint (the Virgin?) freeing another bird from a net

13. (f.171v) A bishop administering the Last Rites to an old man on his deathbed, watched by his grieving wife or daughter; his soul being carried to heaven by an angel

FOUR OF THE MINIATURES ARE VERY HIGH QUALITY AND UNUSUAL EARLY 19TH-CENTURY REPLACEMENTS for lost leaves (nos. 2, 3, 7, and 13 in the list above); not only do the style and colours match the original miniatures and borders closely, but the iconography of nos. 3 and 7, in particular, are very inventive. They must have been executed before the Trautz-Bauzonnet binding; a Nativity miniature (f.86v) was recorded in the 1894 Lignerolles catalogue.

The style of illumination of the original miniatures has features in common with Bruges artists of the third quarter of the 15th-century, including the crisp delineation and somewhat doll-like figures typical of Willem Vrelant, and the characteristic gold-scrolls-on-burgundy backgrounds of the Masters of the Gold Scrolls, but is distinct from their styles in the treatment of draperies, heads, and faces.