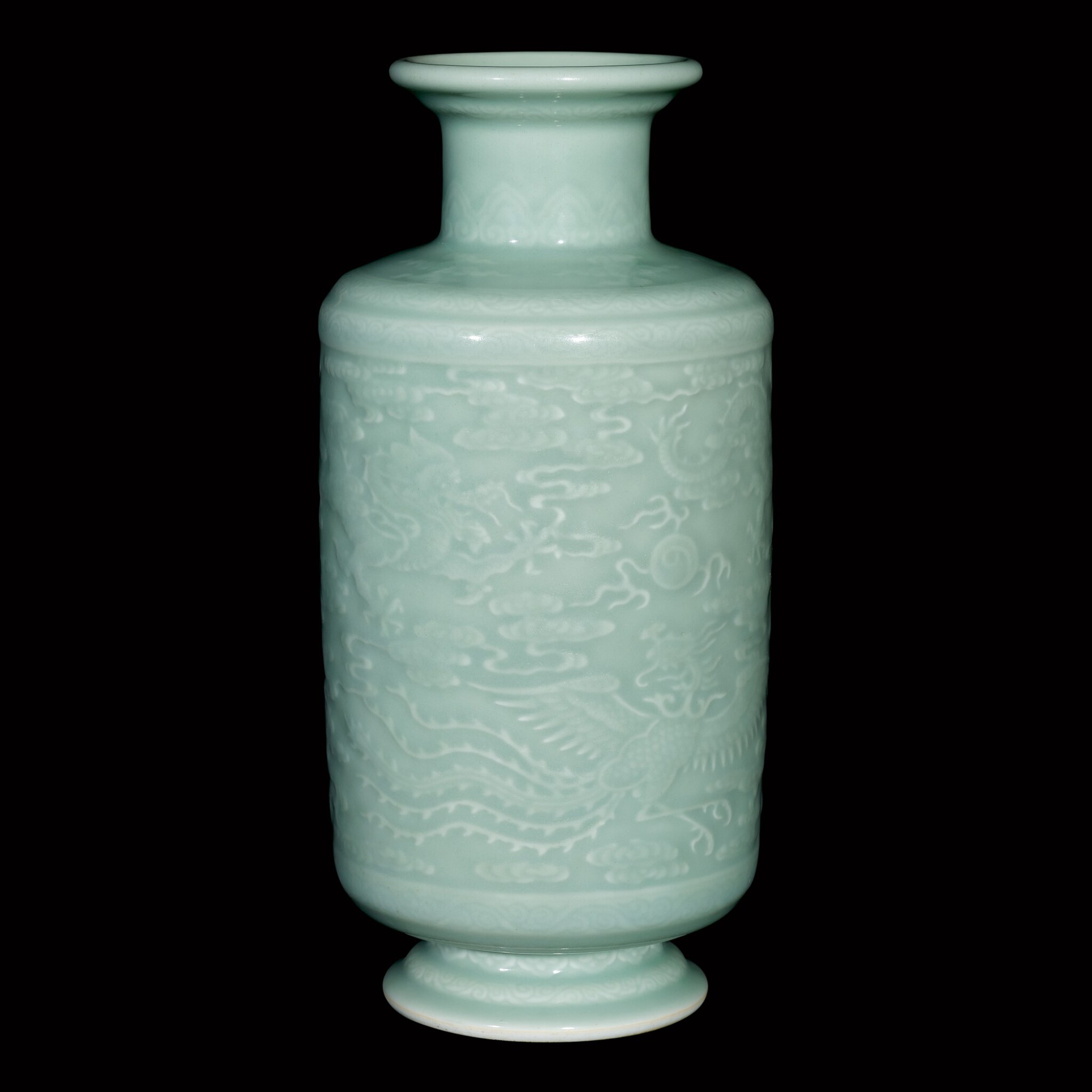 skilfully potted with a cylindrical body resting on a splayed stepped foot, all surmounted by a constricted neck and flared stepped rim, the main body exquisitely carved in low relief with two dragons and two phoenix soaring around a flaming pearl and amidst scrolling clouds, between friezes of cloud swirls, ruyi blooms and scrollwork, covered overall save for the footring with a pale celadon glaze, the base inscribed in underglaze blue with a six-character seal mark, Japanese wood box

The vase is in very good condition with some expected surface wear. There are minuscule insignificant glaze flakes and wear to the rim.

Collection of Colonel W.R. Hodgson, acquired in Tokyo in the early 1950s on the advice of Professor Fujio Koyama of Tokyo National Museum, and thence by direct descent.

It is unusual to find a celadon-glazed vase of this cylindrical ‘lantern’ shape and with this subtle decoration of dragon and phoenix. Two closely related vessels appear to be known, both from the Yongzheng period and preserved in the Palace Museum, Beijing; one, almost identical to the present piece (accession no. xin 00083090); the other, covered in a winter-green glaze, subtly carved with a dragon and cloud design, illustrated in Gugong Bowuyuan cang Qingdai yuyao ciqi / Porcelains from the Qing Imperial kilns in the Palace Museum Collection, vol. 1, part 2, Beijing, 2005, pl. 107.

‘Lantern-shaped’ vessels appeared in the late Ming dynasty, as evidenced by some Longquan celadon vases in the collection of the National Palace Museum, Taipei. Unlike the form and motif found on the present piece, the Ming prototypes were more rounded, and often decorated with floral (accession no. Gu ci 009470) or latticework designs (accession no. Gu ci 015829). By the early Qing dynasty, vessels with a more cylindrical body, angled shoulder and flared rim, as seen on the present piece, were produced. See, for instance, rouleau vases, which are known from many famille verte examples; one, from the Kangxi period, in the Palace Museum, Beijing (accession no. Gu 00148354).

Monochrome wares during the Yongzheng reign are considered to have achieved the best quality in the Qing dynasty. Although the Jingdezhen kilns had begun to make small quantities of celadon-glazed porcelains in the Ming dynasty, it was only under the supervision of the talented and innovative official Tang Ying (1682-1756) from 1728 onwards that the celadon glaze was perfected and production greatly expanded. Tang is known to have studied in detail the finest imperial porcelains of the Song dynasty, which led him to develop varying shades of the celadon glaze as recorded in his Taocheng jishi / Records of Ceramic Production in the last year of the Yongzheng reign. Compared to Song celadon wares, the celadon glazes produced in the Qing period are considered to be more delicate and refined, as they were applied over a pure white porcelain body.

Yongzheng vases of this cylindrical form are also known decorated in other palettes; compare a blue-and-white vessel, painted with a dragon and phoenix motif, in the Palace Museum, Beijing (accession no. Gu 00149490), illustrated in Porcelains from the Qing Imperial kilns, op.cit., pl. 32; and a plain teadust-glazed vase, sold at Christie’s New York, 3rd June 1993, lot 243.