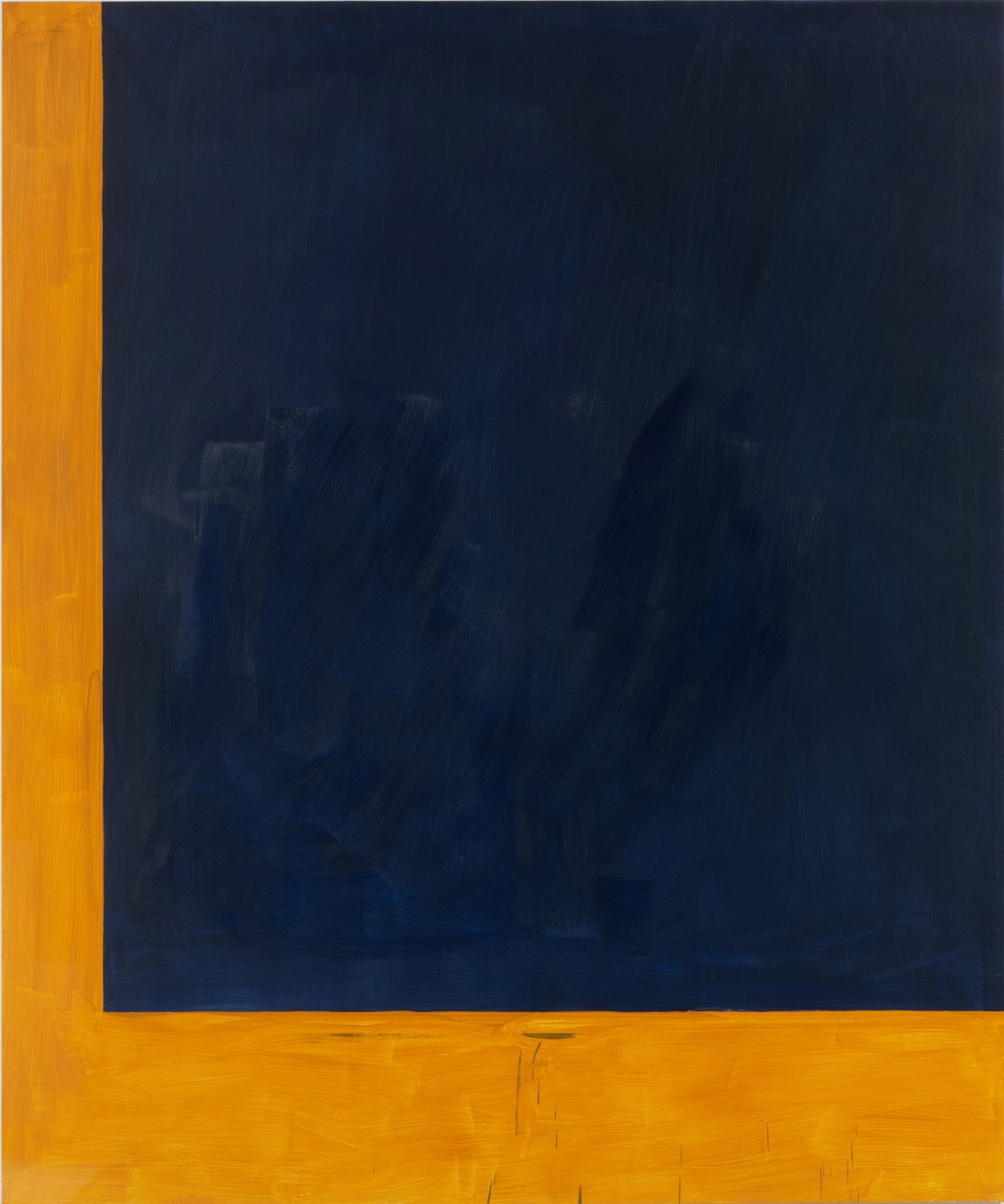 This work is recorded in the archive of Günther Förg as no. WVF.91.B.0112. We thank Mr. Michael Neff from the Estate of Günther Förg for the information he has kindly provided on this work.

Günther Förg, November 1999 - January 2000 (this work was illustrated on the flyer of the exhibition)

Executed in a monumental scale, Günther Förg’s striking Untitled is a bold example of the artist’s modernist vocabulary. Executed in 1991, the present work is an homage to - and extension of - the artists lead paintings, which he began working on in 1989. Similarly, to the lead paintings, the present work embodies Förg’s fundamental artistic principles, honing in on the interplay between space, colour and elemental materiality. Employing large and crude brushstrokes, the artist explores the physicality and dimensionality of his chosen medium, applying thinly layered washes of acrylic paint onto the wooden ground. Lightly concealing the support, Förg emphasizes the purity of colour and allows the expressive quality of each gestural brushstroke to build up the composition: “colours emerge, the paintings become more open, and even the material’s arbitrary elements on the surface and in the patina become part of the picture” (Günther Förg, quoted in Günther Förg: Paintings on Lead, exh. cat., Thomas Dane Gallery, London, 2006, p. 7).

Here, Förg’s simple compositional formula, characteristically divided into unequal sections, juxtaposes two powerfully emotive primary hues- the expansive enigma of dark blue and the warmth of a radiating warm yellow. Through the dispersion of his chosen elemental colours, the artist evokes the design-considered purism of Piet Mondrian and the De Stijl movement. At a later end of abstraction, the dispersion of colour into space and sense of architectural statement recalls Mark Rothko and Barnett Newman although he consciously distanced himself from the near-spiritual aesthetic espoused by the American Abstract Expressionists. Distinguishing his aims from his predecessors, Förg explained, “Newman and Rothko attempted to rehabilitate in their works a unity and an order that for them had been lost ... For me, abstract art today is what one sees and nothing more” (G. Förg, quoted in Günther Förg: Painting / Sculpture /Installation, exh. cat., 1989, Newport Beach, p. 6). By defining abstraction as an expression among many others, Förg re-oriented the dialogue for minimalist art and situated himself amongst the most significant artists of the Twentieth Century.

In 1992, one year after the present work was painted, Förg was represented at documenta 9 and in 1996 he received the renowned Wolfgang Hahn Prize, which is awarded annually by the Museum Ludwig in Cologne. Today his works are in the collections of the Hamburger Bahnhof in Berlin, the Kunstmuseum Bonn, the Museum für Moderne Kunst in Frankfurt am Main and the Museum of Modern Art in New York. They can also be found in other important museums and collections worldwide.