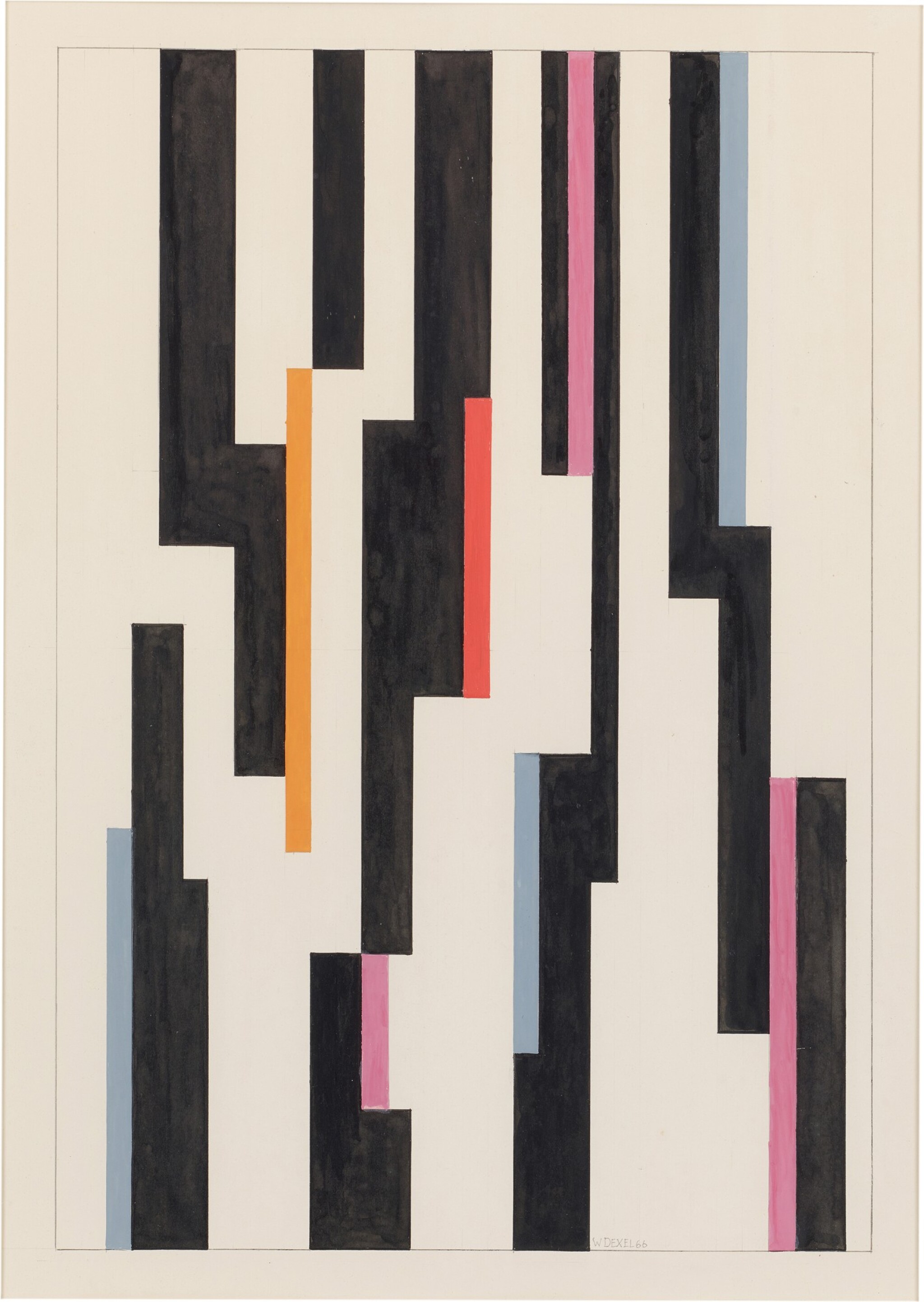 tempera, gouache and pencil on paper

We are thankful to Walter Vitt, Cologne, for his assistance in cataloguing this work.

This work is in very good condition. Executed on cream wove paper. The sheet is affixed to the overmount along the extreme edges. There are faint pencil gridlines throughout, relating to the artist’s working method. This includes a linear area of paper skinning (approx. 20cm in length) in the upper right corner where the artist has erased a previous pencil line and two further small areas of skinning to the upper right and lower right corners. There are a few tiny spot accretions (the largest measuring approx. 0.1cm in diameter) in occasional places throughout.

Walter Dexel's Composition with Black Perpendicular (no. 482) from 1966 is one of half a dozen works in which the artist found completely new formal structures after the banishment from painting in National Socialist Germany.

In 1960/61, several years after the end of the Nazi era, he turned to his artistic work again and until 1967 had noticeably continued on his early works, finishing early sketches, among other things. Between 1966 and 1968, however, he produced six works (no. 480 to 485) that mark a very important stepping stone in Dexel's oeuvre, the overcoming of his art of the 1920s. Dexel remains faithful to Constructivism but finds a new paths. The works, including the present one, are strongly determined by the perpendicular line. The artist now tends towards the colour black and avoids all circular forms (discs, half-discs, three-quarter discs, arches). Some pictures like the present composition thrive completely from the perpendicular line, which without touching the boundaries of the set sheet runs steeply through the surface from bottom to top or from top to bottom. Since the structure emerges equally from the top and bottom, the forms create an appearance as being a section from a larger composition of a movement of forms.

At the time Dexel was faced with the question of whether his work was still proficient, for he had learned in his art history studies from his teacher Prof. Fritz Burger that a picture should not outgrow its limitations. From then on, the artist deferred back to this skilled set of rules again and reverted foremost to disc shapes and squares. Yet it must be noted that the compositions of the years 1966 to 1968 mark a significant transition in Dexel’s work with the above-mentioned overcoming of his working style from the 1920s.