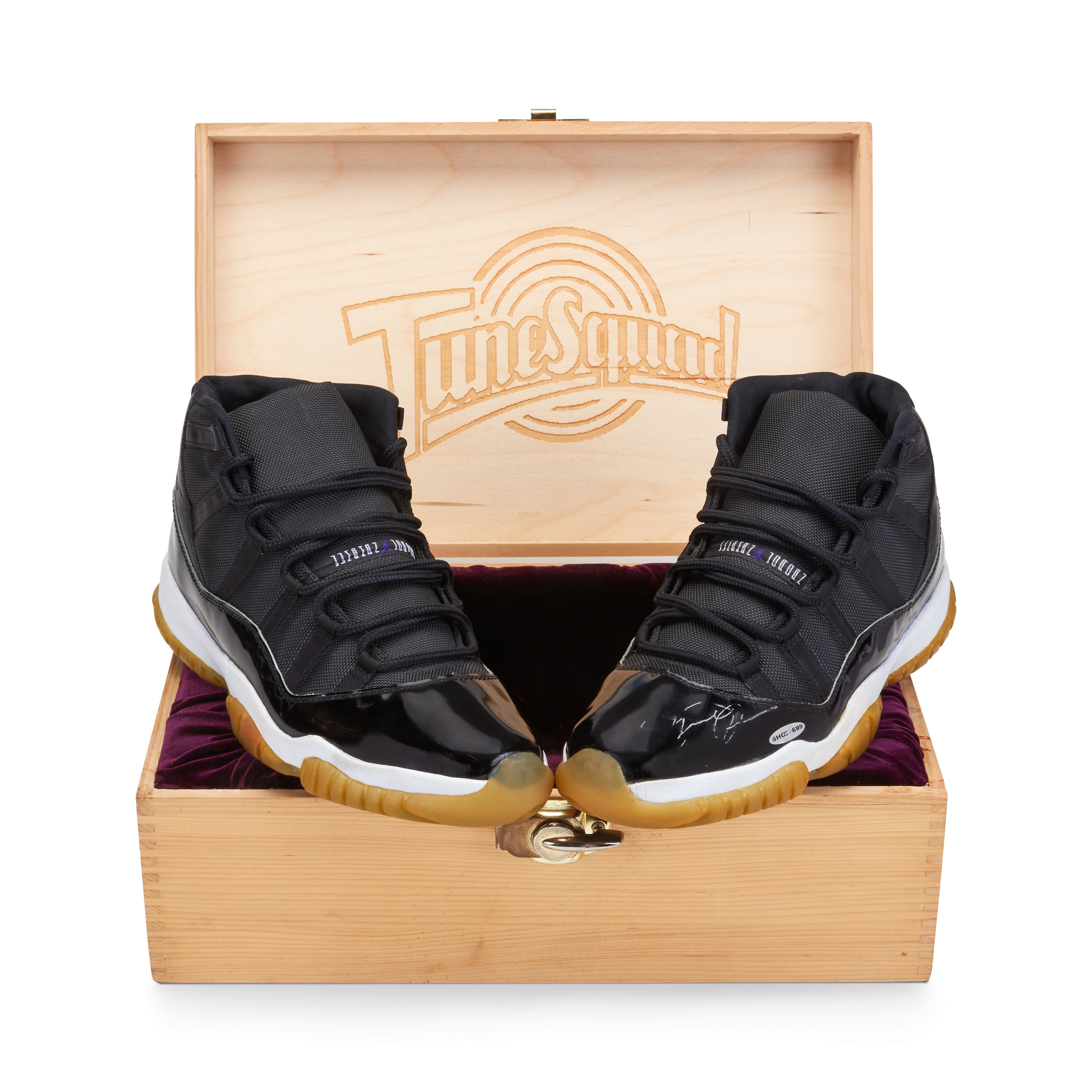 The sneakers are in deadstock condition. The signature has been smudged in several areas. The sneaker’s soles have oxidized over time - changing colors. This is common for vintage Air Jordan 11s.

Space Jam starred Michael Jordan, Bugs Bunny and a variety of other NBA superstars (Larry Bird, Charles Barkley, Patrick Ewing, among others) and Warner Bros. animated characters. In the film, Jordan squares off against the alien ‘Monstars’ and dons this very model of Air Jordan, featuring a purple Jumpman logo. The film was a remarkable success, with a cumulative worldwide gross of over $230M.

The pair on offer is a ’Player Sample,” meaning that it was cut with Mr. Jordan in mind. It is in deadstock condition, and never used. At the time, this particular colorway was only produced for Michael Jordan, and not sold in retail stores. The coding on the interior states BBMN04-950112-FTPS. BBM means “Basketball Mens” and “950112-FTPS” references that the shoes were produced in 1995 (“95”). “FTPS” means that they were made out of the Feng Tay (“FT”) factory, and are Player Samples (“PS”) cut with Mr. Jordan in mind. The shoes are in Michael Jordan’s Air Jordan 11 size 13 (Jordan would wear 13, 13.5, and a combination of both at different points in his career), and have been signed by Michael Jordan in silver ink. They are offered in a custom wood and velvet box.

The Jordan 11 style was worn by Michael Jordan during the 1995-1996 NBA Playoffs and Finals. This season would prove an iconic one for Michael, winning his fourth NBA MVP title (leading the Bulls to 72 wins), with an additional NBA Finals MVP title after the Bulls defeated the Seattle Supersonics in the Finals.

The 2016 Retro Air Jordan 11 Space Jam was such an unbelievable success, that Nike’s Brand President Trevor Edwards announced following the release that “The Space Jam 11 was the largest and most successful shoe launch in the history of Nike.”

These shoes are accompanied with a Certificate from Upper Deck Authenticated in regards to the signature.