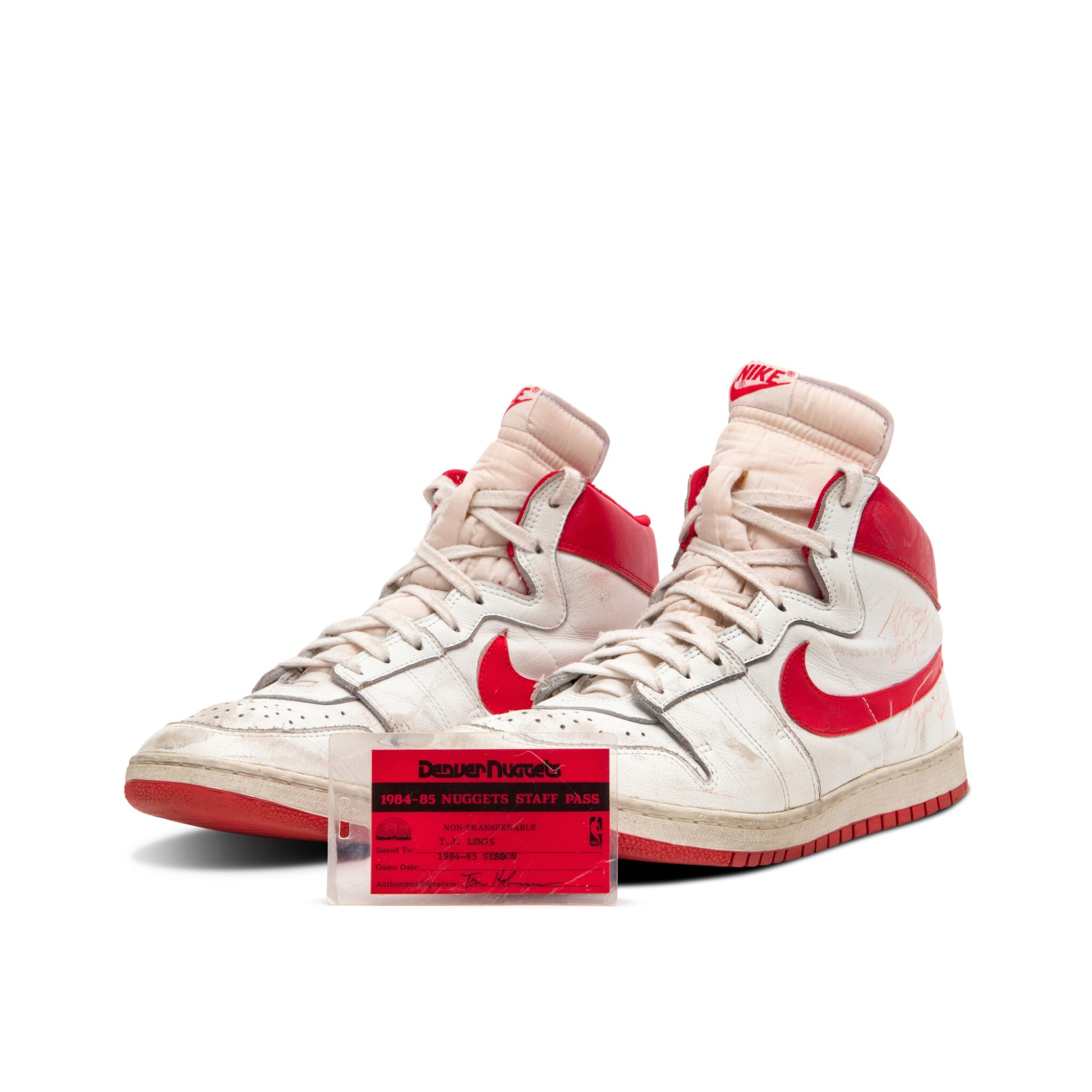 The sneakers are in good overall condition, consistent with signs of wear.

The following condition report has been provided by MEARS Authentication, LLC., 1234 Manitoba Avenue, South Milwaukee 414-301-9536, troy@mearsonline.com, an independent Memorabilia Evaluation and Research Services organization, who is not an employee of Sotheby’s.

The examination of wear to both shoes indicated an evenly distributed amount of wear, creasing, paint transfer, and court dust. The degree of wear is consistent with NBA game wear and also by comparison to other rookie Michael Jordan shoes examined by MEARS.

The Nike Air Ship is a key part of the design legacy of the original Air Jordan.

The Nike Air Ship is a key part of the Air Jordan brand genesis. When Michael joined the NBA, the Air Jordan 1 was still not ready for him. He preferred sneakers that were lower to the ground, where he could feel the court beneath his feet. In the process of creating the Air Jordan 1, Nike supplied Jordan a limited number of Nike Air Ships – some of which had “Air Jordan” or “Nike Air” printed on the heels. This pair, featuring just “Air” is an unusual example.

The “Air Ship” – designed by Bruce Kilgore – was originally released in 1984, and was the first basketball shoe worn by Michael Jordan as an NBA professional. In the preseason and early games of his rookie year Michael wore a white and red colorway and also a black and red colorway (now known as ‘Bred’) that Nike had specially designed for him.

Michael’s Black & Red Air Ships became controversial after the NBA sent Nike a letter referencing a game on October 18, 1984 (NBA Preseason) informing the company that Jordan’s colorful shoes were a violation of the league’s uniformity of uniform clause. Nike responded by creating an infamous ad campaign around Jordan’s ‘banned’ shoes (advertising the first Air Jordans) remarking that while “the NBA threw them out of the game, fortunately, the NBA can’t stop you from wearing them.”

These White & Red Air Ships are a remarkable artifact in the history of sports and basketball, and have been kept in excellent condition by the Denver Nuggets Ball Boy they were originally gifted to, Mr. Tommie Tim III Lewis.

The sneakers are accompanied by a Letter of Provenance from Mr. Lewis, and a Letter of Opinion in regards to Game Use from MEARS Authentication, LLC. They are additionally presented with Mr. Lewis’ 1984-1985 Denver Nuggets season Staff Pass. Sotheby’s is grateful to James Spence Authentication for confirming the signatures. The shoes are also accompanied by a letter from Resolution Photomatching who notes a possible Photomatch to Mr. Jordan’s 3rd NBA game indicating a possibility that this pair was worn in additional games before the 1st of November 1984.