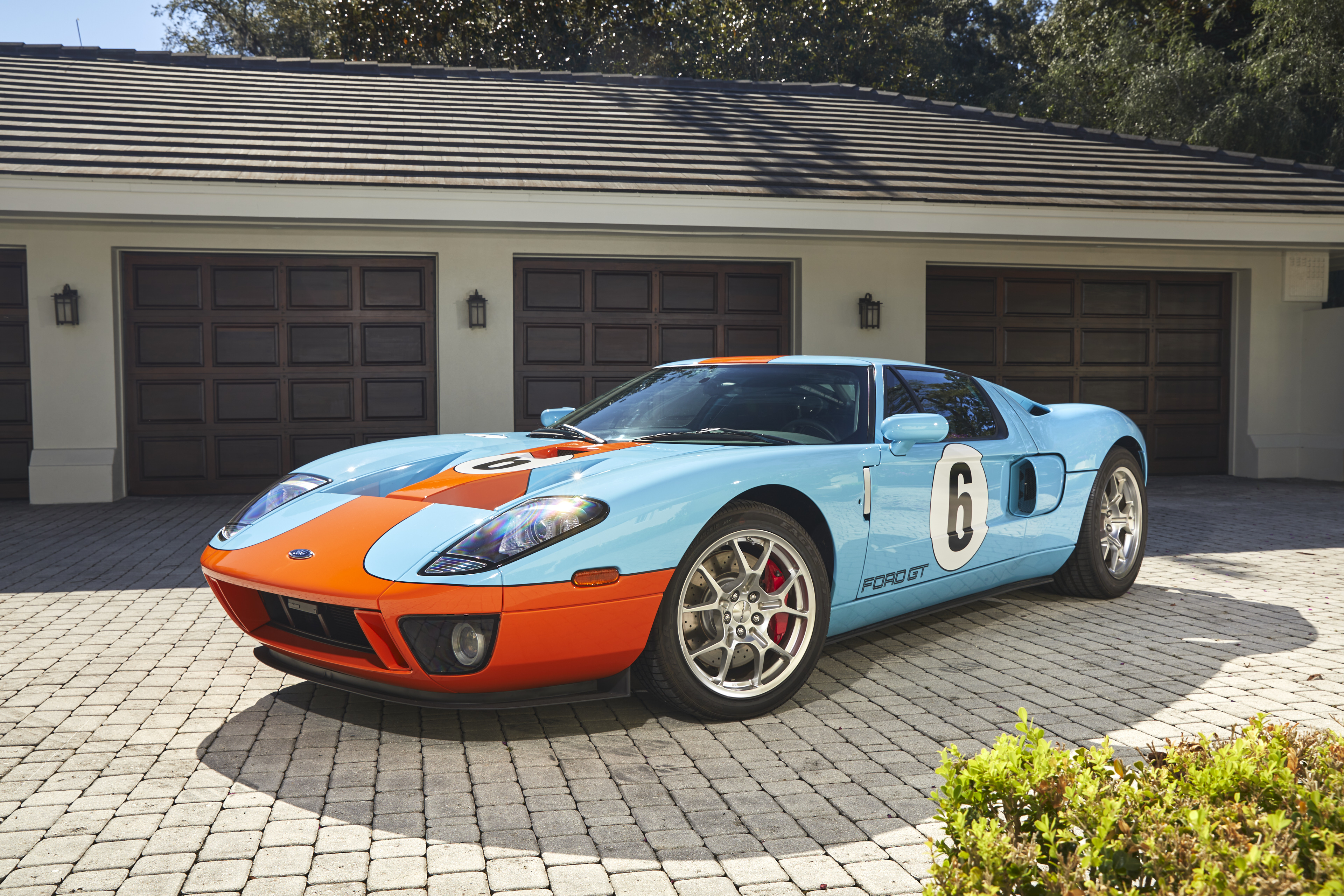 ·        Accompanied by owner’s manuals with pouch and framed window sticker

Please note that this lot is only subject to RM Sotheby’s Buyer’s Premium which is 12% of the Hammer Price for a Hammer Price up to and including $250,00 and 10% of any amount of the Hammer Price in excess of $250,000, along with the RM Conditions of Business which can be found through the online catalogue. For the avoidance of doubt, any invoicing or post-sale inquiries for this lot will be handled by RM Sotheby’s.

In 2005 Ford highlighted its centennial celebration with the introduction of a new commemorative model that evoked the company’s most glorious chapter in motorsports. The new Ford GT was a 21st century interpretation of the GT40 model that won the 24 Hours of Le Mans four consecutive years from 1966 to 1969. From its slippery exterior form to its race-prepared V-8 engine, even down to the name, the GT was a fitting homage to the original GT40, proving to be wildly successful with Ford enthusiasts and once again capturing the popular imagination.

As expected, the GT delivered superlative performance, powered by a mid-mounted 5.4-liter dual-overhead cam aluminum V-8 that was fed by a Lysholm twin-screw supercharger. Lubricated by a competition-style dry sump oil system and mated to a Ricardo six-speed manual gearbox, the V-8 developed 550 horsepower and 500 pound-feet of torque. These metrics were sufficient to rocket the GT to 60 mph from standstill in just 3.3 seconds, and to reach a top speed of 205 mph, placing the model in the elite club of 200-plus-mph supercars such as the concurrent Porsche Carrera GT and the Mercedes-Benz SLR McLaren.

The power on tap was kept in control with the assistance of a helical limited-slip differential and vented, cross-drilled Brembo brakes. With the design brief of exclusivity in mind, Ford limited GT production to just 4,038 examples through two years of manufacture.

For the 2006 model year, Ford took the concept a step further by introducing a special Heritage Paint Livery Package edition. Few GT40 examples had been as significant and influential as the 1968 and 1969 Le Mans-winning chassis number 1075, which was campaigned by the John Wyer Automotive team while sponsored by Gulf Oil. The blue and orange Gulf Oil livery is one of the most legendary in motorsports history, and it was adopted for the new GT edition, with the coachwork finished in Heritage Blue paint complemented by Epic Orange stripes. This livery furthermore included four white roundels so that owners could apply the race number of their choice.

This sensational GT Heritage edition boasts minimal use in the care of just one owner throughout its 15-year life. As documented by a framed original window sticker and a Marti Report, this Ford was built in May 2006 and sold two months later to the consignor via Jarrett-Gordon Ford of Davenport, Florida. In addition to being finished in the blue and orange Heritage livery, the car was desirably equipped with all three of the other available Heritage options, including red painted brake calipers, the McIntosh Audiophile sound system with CD player, and painted BBS forged lightweight aluminum wheels.

As clarified by a CARFAX and service invoices on file, this Ford was dutifully submitted for regular maintenance to Tropical Ford of Orlando, including in March 2021 when the battery was replaced. Displaying 1,024 miles on the odometer at time of cataloguing, the GT features near-showroom condition thanks to its gentle life in a temperature-controlled environment, with doting care and minimal use. The consignor has mounted the racing #6 on the white roundels in honor of the number worn by the Gulf Oil-sponsored John Wyer Automotive GT40 (chassis number 1075) that was driven to victory at the 1969 24 Hours of Le Mans by Jacky Ickx and Jackie Oliver.

Wonderfully maintained and preserved, and indubitably breathtaking with its Le Mans-evoking heritage aesthetics, this powerful commemorative supercar may be enjoyed on the track for its blistering performance, or quietly admired within the confines of finer collections. The rare homage to Ford’s four consecutive GT40 wins at La Sarthe would make a crowning addition to any supercar gathering, offering a spiritual successor to Ford’s greatest racing triumph.