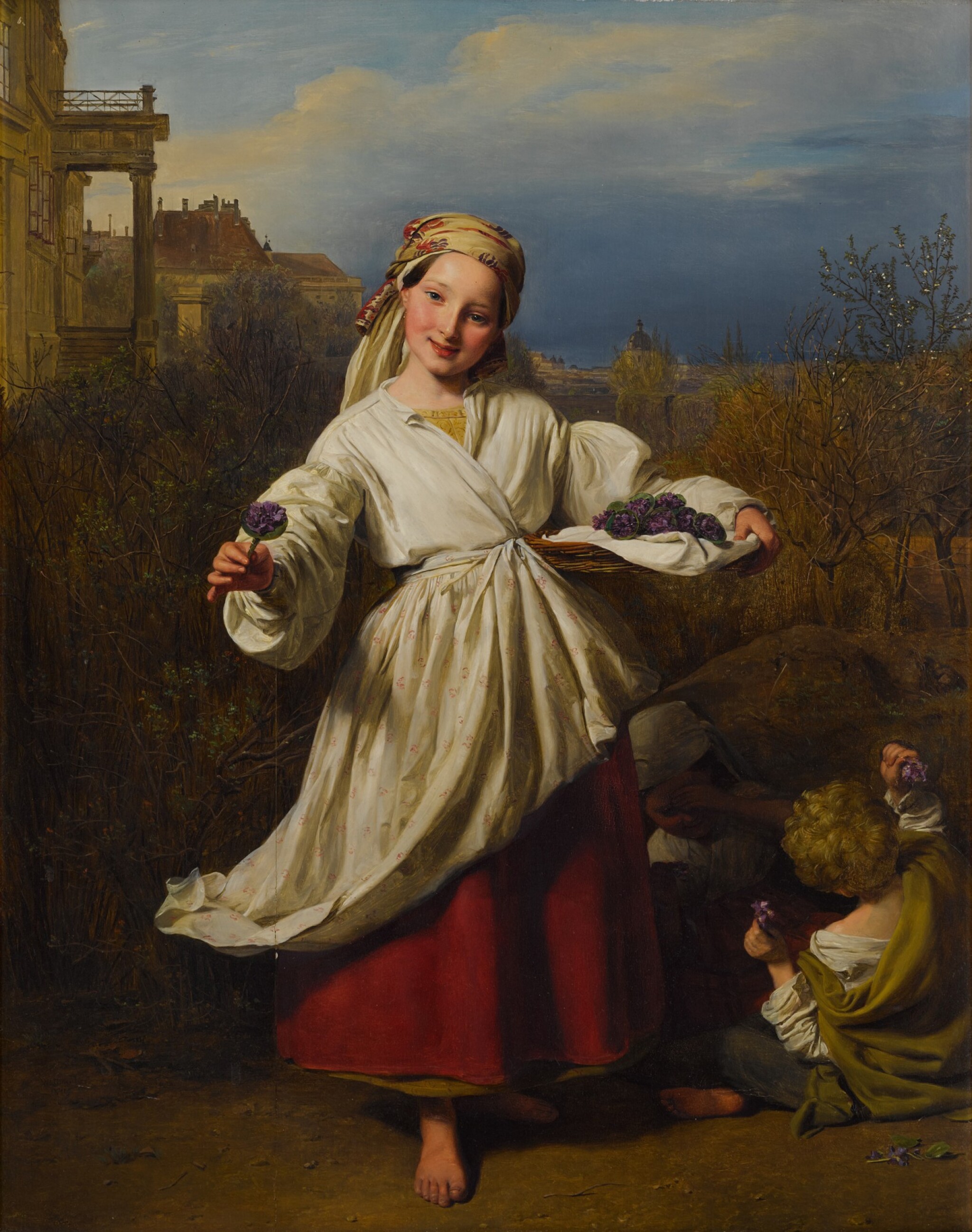 The panel consists of three planks, is stable, and has two horizontal battens and beveled edges on the reverse. The image reads well under a clear varnish. Thin vertical lines corresponding to the panel joins are faintly visible. A line can be noticed beginning below the figure's hand holding a flower and traced to the below of the white hem. It appears stable and is not distracting to the overall image. Under UV inspection, the varnish has been applied unevenly and comparatively thick in areas of the background. The painting can be hung in its current state. Offered in an carved giltwood frame with a name plate that reads 'Ferdinand Georg Waldmueller.'

David Goldmann (1887-1967), Vienna;
Seized from the above by Hitler's agents and allocated in the central depot of the Kunsthistorisches Museum, Vienna (inv. D.G. 13), where it was reserved for the Führermuseum;
Transferred to Alt Ausse (inv. no. 4699) for the Kunstmuseum Linz;
Recovered by the Allied Forces on 15 October 1945 and sent to the Munich Central Collecting Point (inv. no. 2333/2);
Given over to the Austrian Government Kremsmünster depot (inv. no. K1064) on 25 April 1946;
Restituted to David Goldmann 15 May 1948, New York;
Thence by descent to the present owner.

At this point in his career, Waldmüller had fully embraced the Biedermeier style and chose subjects appealing to the growing middle-classes. In the present lot, the artist depicts a young woman selling flowers set within a field surrounded by larger, stoic buildings. The rich colors bring to life her beauty and youth and capture the bourgeois taste of the time in a striking manner.

The reverse of the paintings memorializes this complicated period of their history with labels noting each depot and storage facility the paintings moved to while under German control. After being taken to the central depot of the Kunsthistoriches Museum, the paintings were then stored in the Altaussee salt mine, which was then seized by the U.S. Army on May 8, 1945, and the artworks transferred to the Munich Central Collecting Point marking the beginnings of the restitution process. Goldmann managed to successfully have most of these items returned to him in New York by the late 1940s. The paintings and drawings have remained in the family since this time.