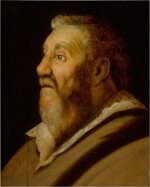 There are a few retouches visible under ultraviolet light to the join on the left. There is one spot of retouching on the bridge of the nose which is slightly discolored. Weakness in the dark colors of the hair and beard may have old retouches that are not visible under ultraviolet light. If the varnish were freshened slightly, it could be hung in its current condition.

This strongly-lit study of an elderly man is an early work by Jan Lievens, dated by Schnackenburg to circa 1624, when the artist must have been exposed to the first generation of Dutch Caravaggisti who were just then starting to return to the North from Rome. Over the last decade and a half, several early works by Jan Lievens have come to light, and his early oeuvre, and the dating of it, has been reassessed. The exhibition devoted to Lievens in 2009 under a team of distinguished scholars led by Arthur Wheelock was subtitled - with good reason - A Dutch Master Rediscovered, and cast much fresh light on various aspects of Lievens’ oeuvre, not least of which was his work at the outset of his career, in the mid-1620s.1

Schnackenburg observed that the purpose of the present work may also be understood as a more conventional, but finished, preparatory study for the protagonist in Lievens' Half Length Figure of a Man Looking Up, possibly a priest offering Sacrifice, as opposed to a fragment of a larger composition.2 Such an observation was put forth following technical analysis of the oak panel, verifying that the boards are of their original format and design.

Though Werner Sumowski had previously published the work as a reduced copy based only on black and white photos, he subsequently revised his opinion following first hand inspection, and considered it an original study by Lievens from circa 1625. He is quoted in the 1997 Tel Aviv exhibition as stating that the work is "very early, strongly naturalistic from around 1625, in which Lievens coms to terms with the Caravaggists of Utrecht".3

Lievens is credited with playing a central role in the creation of the genre of the autonomous tronie. Whilst his Flemish contemporaries, Peter Paul Rubens and Anthony van Dyck, were producing head studies in preparation for of use in larger compositions, Lievens was creating paintings of heads and characters that were marketable pictures in their own right, often painted from life.  Tronies, literally meaning 'head', 'face' or 'facial expression' in Dutch, are not portraits or part of any other established genre, but simply a means to master the art of characterization, as Lievens has done in this carefully observed head. Lievens’ tronies were enormously influential, and their impact spread throughout the Netherlands and today are best, or perhaps more usually, appreciated within the œuvre of Lievens’s childhood friend Rembrandt van Rijn.

3. Tel Aviv 1997, p. 35. A copy of Werner Sumowski's revised and updated certificate is available upon request.