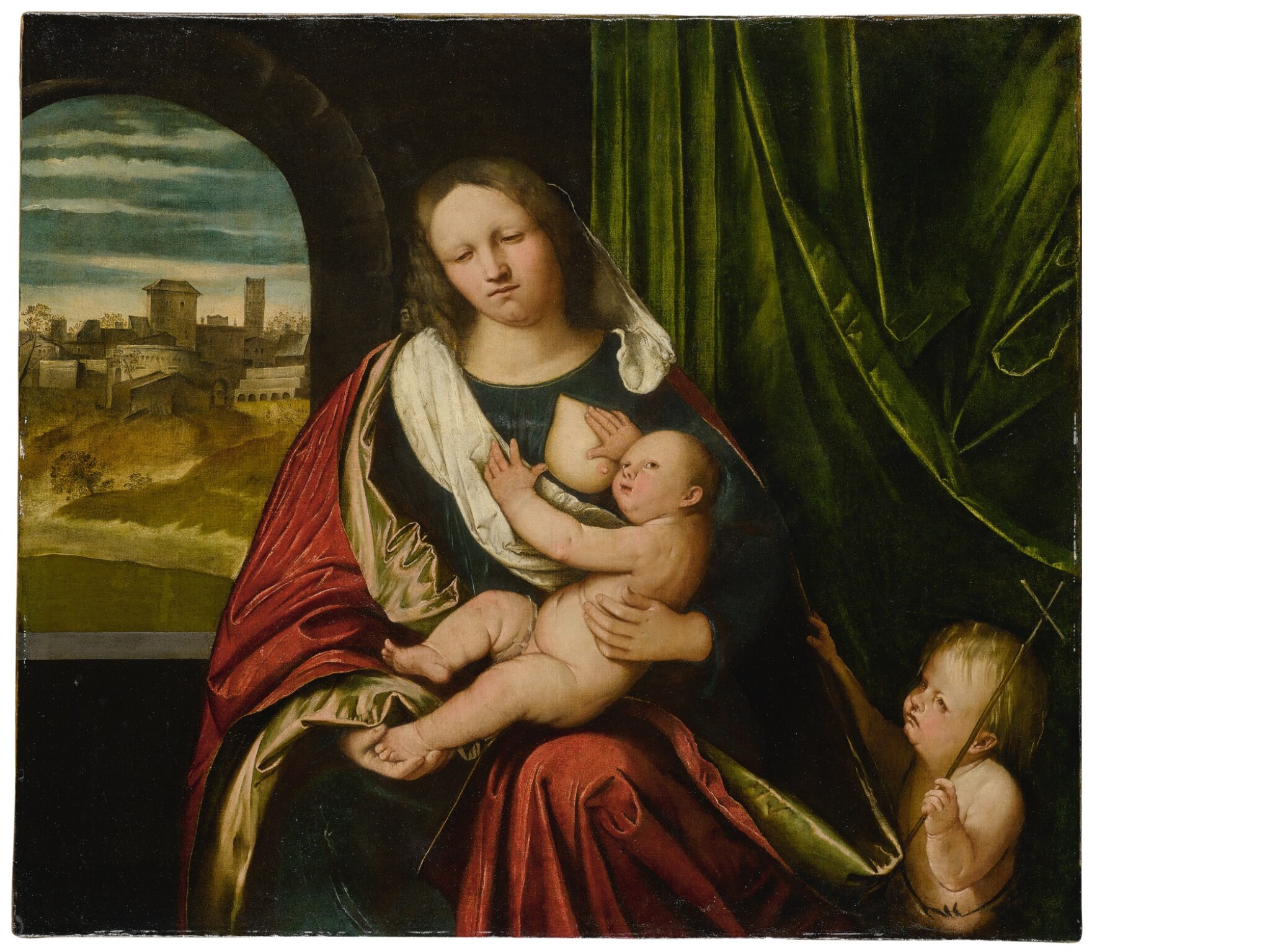 The following condition report has been provided by Matt Hayes of Pietro Edwards Society of Art Conservation, 119 west 23rd Street, Suite 400, New York, NY 10011, 212-457-8956, mh@edwards-society.com, an independent restorer who is not an employee of Sotheby's. This painting offers a cohesive appearance despite some signs of age. The paint has been strongly cleaned in the past, resulting in general wear. In thinly painted areas, the crowns of the fine canvas weave are visible. The lighter passages, and the red textile of the mantle, are better preserved. There are a number of large losses throughout, with associated retouching. The canvas was perhaps once folded, as a line of lacunae extends through its center. Broad retouching is especially evident at the edges, in the darks of the green curtain, in the blue robe, and in the Child's forehead. Despite these injuries, the picture holds together well. The thick varnish has an even gloss and is not appreciably discolored. It does not wholly saturate the darks passages. The original canvas has an old glue-paste lining, and is stretched on a softwood stretcher with one vertical and one horizontal cross-member. The lining is secure; the textile support is in plane and the tension good. The modern frame is in good condition.

This painting is a rare and characteristic work by Altobello Melone. It was first published as such by Ferdinando Bologna, to whose attention it was brought by Giuliano Briganti. The picture successfully blends the various elements that typically make up this artist's idiosyncratic style: the landscape in the background is Venetic and particularly recalls Dosso Dossi, whose landscapes were influenced by Giorgione and the young Titian; the arrangement of the Madonna and Child group before a parapet and draped curtain is reminiscent of works of a similar theme by Titian and by the young Sebastiano del Piombo; and the distinctive physiognomy of the little Saint John the Baptist finds parallels in some of Gerolamo Romanino’s paintings. Melone’s protagonists are by no means idealized and their eccentricity lends them credibility: St. John tugs at the Madonna’s robe whilst she stares absent-mindedly into space, perhaps foreseeing the destiny of her child, and the life-like Christ Child pauses from feeding to look out and engage with us, the viewers.

Altobello Melone remained for much of his working life in his native Cremona, where he enjoyed a successful career as an artist. The Venetian chronicler Marcantonio Michiel tells of Melone’s early training with the Brescian painter Romanino and although his style certainly influenced Melone’s works, no actual apprenticeship or early collaboration is documented. Melone's style shows an appreciation of Venetian High Renaissance art, particularly of Titian, as exemplified by his painting of Two Lovers in the Gemäldegalerie, Dresden, dated by Gregori and Ballarin to circa 1515.1 The Venetian character of Melone's works is coupled with a marked interest in German art, largely known to him through engravings and Dürer’s paintings in Italy, and this can be seen in his works of the mid-1510s and '20s, such as his Saint Damian which is signed and dated 1529.2 The present painting probably dates from the latter half of the second decade of the 16th century, around the same time as Melone's Flight into Egypt of 1517 in the Duomo in Cremona.

We are grateful to Prof. Marco Tanzi for endorsing the attribution to Melone on the basis of photographs.