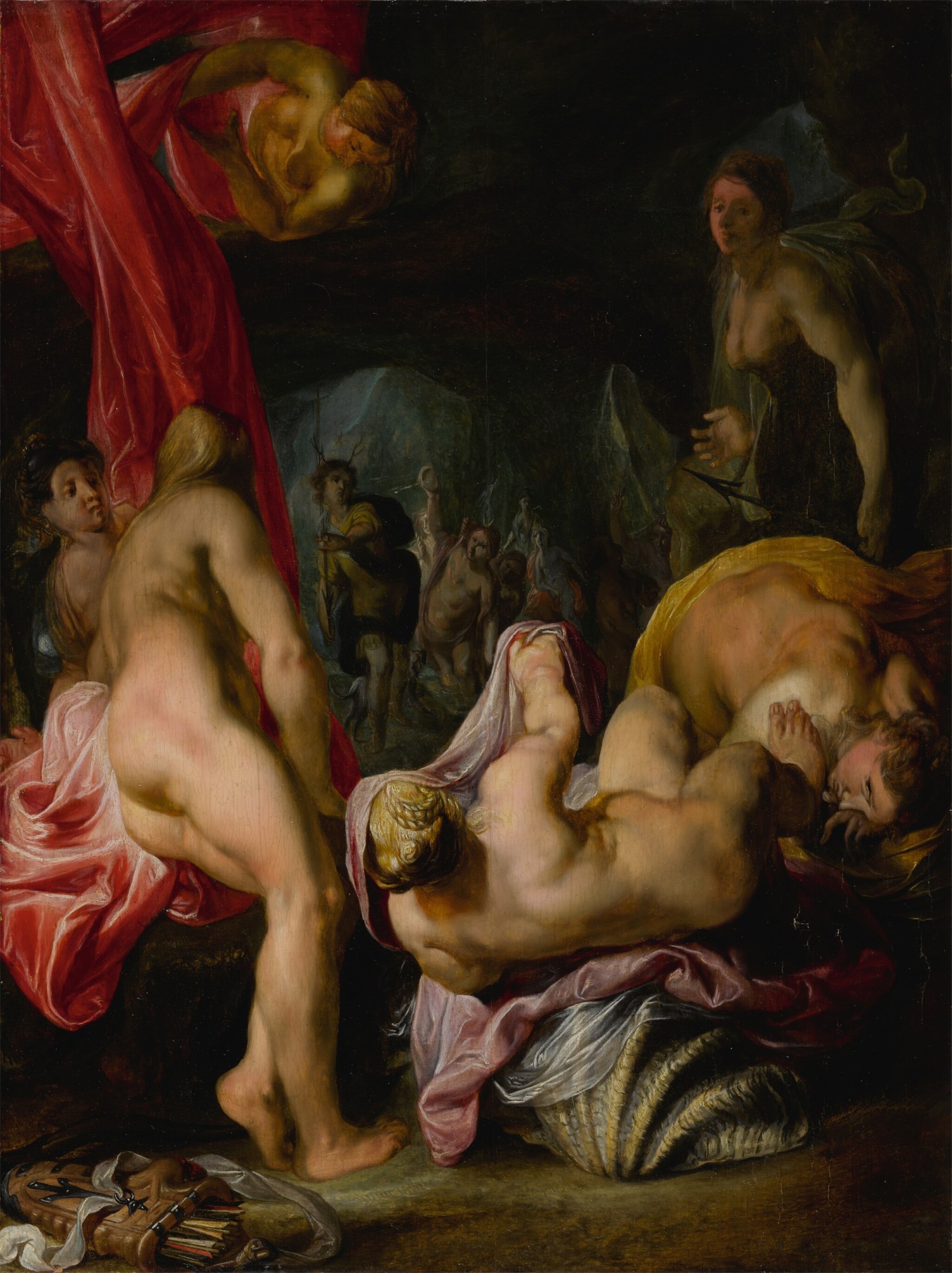 inscribed on labels on the reverse: Ralph Papé and Villa d'Este/Haseltine

This work on panel could be hung in its current condition although some further attention to the slightly unstable paint layer could be considered. The reverse of the panel shows a thin vertical reinforcement through the center of the work, addressing what appears to be an original join between two sections of wood. The work is probably slightly dirty. There is a fresh varnish which illuminates the paint layer well.

Two separate campaigns of retouching are visible when the work is viewed under ultraviolet light. The more recent retouches can be seen in the dark robe of the figure in the upper right, in a few spots in the shoulders of the figure in the center of the right side and in a few spots in the shadowed part of the crimson robe in the lower right. There are also retouches from this campaign along the central crack in the lower half of the panel and a couple of spots in the nude on the left.

An older campaign of retouches can be seen in the horizontal branch in the upper part of the composition, in the two figures on the left side and in a few spots in the figure in the upper left. Most of the retouches are concentrated on the right side and upper center. The work could certainly be hung as is, but would benefit from an overall reexamination of the restoration.

This scene teems with energy, color, and the figural form. It was painted in Antwerp around 1615-1620 by a very accomplished hand. Initially, an attribution to the young Johann Liss was put forward by Sir Denis Mahon, when he first saw the painting in 1973. He suggested Liss may have painted it not long after his arrival in Antwerp from Holland and before his departure for Italy.  This attribution was later endorsed by others including Benedict Nicolson and Erich Schleier, although Dr. Rüdiger Klessman published it under the group of wrongly attributed works in his 1999 monograph on the artist.

The sheer dynamic quality of the composition, however, suggests a virtuosic hand. The connection to both Rubens and Jordaens in the sensual depiction of nudes is undeniable in this work, and, in fact, an attribution to the young Jacob Jordaens has more recently been proposed. Indeed, the attention paid to the beauty of the human form, with the flesh tones of the figures serving as pleasing contrasts to the opulent elements surrounding them, enlivens the packed and dynamic scene in a manner in keeping with the style of the young Jordaens. Some parallels can be drawn between the present work and a fragment by Jordaens of Moses striking water from the rock of circa 1615.1  Both compositions are slightly imbalanced and the figural types of both are modeled in a similar fashion. Additionally, the somewhat complicated and agitated poses of the figures in the present work have some resemblance to those found in Jordaens' Lapiths and Centaurs, also of circa 1615, in a private collection.2

According to the catalogue entry the last time this painting appeared at auction in 2012, technical examinations, including infra-red reflectography, completed on the panel in about 1995 revealed some underdrawing, particularly in the head of the nymph in the right foreground: two attempts at her profile were drawn, neither of which were followed in the final painting.

This composition was engraved in reverse by Jacob Coelemans in 1700 as after Otto van Veen.3