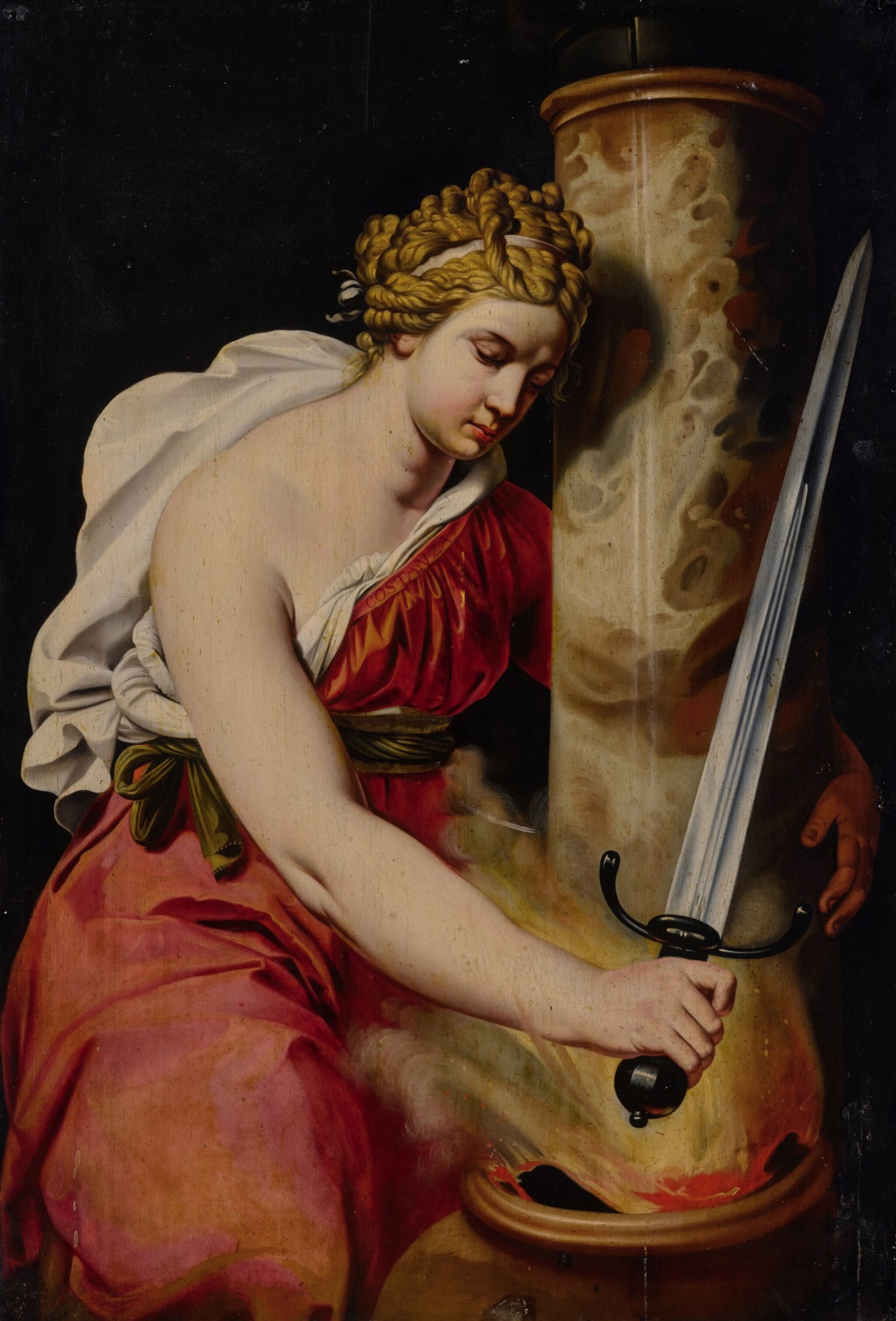 inscribed on the upper border of her dress: COSTANZA

This work has not been recently restored. It is noticeably dirty. The panel is uncradled. The reverse was painted at some point; some of this paint is slightly unstable and has developed losses. There are two reinforcements on the top edge added to secure one join in the center and another running vertically through the column on the right. Both may be original joins. There are two unrestored old cracks to the panel in the lower right corner. Vertical cracking has developed within the lighter colors of the figure, column, and white robe. There is slightly raised cracking in the column and forearm that could be addressed. There are no signs of any abrasion or discoloration. Retouches are minimal and mostly confined around the edges. This work would certainly respond well to restoration.

This commanding depiction of Constancy is a testament to the versatile talents of Abraham Janssens, a prominent figure in the history of Flemish Baroque art and a contemporary of Peter Paul Rubens who was the first prominent artist to bring Caravaggism to Antwerp. The sculptural monumentality of this life-size figure is both enlivened by the dramatic Caravaggesque lighting but also tempered by an overwhelmingly contemplative mood. With his characteristic bold handling, crisp coloration, and smooth technique, Janssens renders the figure here as a strong woman, clothed in an off the shoulder, classically inspired silk dress with a billowing white shirt. She embraces a marble column set ablaze at its base whilst with her right hand she is holding a long sword.

This depiction corresponds with the depiction of Constancy in Cesare Ripa’s Iconologia of 1603 (translated into Dutch in 1644). The entry cites “A woman embracing a pillar with her right Arm, and she is holding a drawn sword in her left hand, over a Fire on the Altar, as if she had a mind to burn her Arm and Hand. The Column shows her steadfast resolution not to be overcome; the naked sword, that neither Fire nor Sword can terrify Courage arm’d with Constancy.” 1 The iconography of Constancy, and other allegorical figures, followed an established tradition that had its roots in the Renaissance, as codified by Ripa’s Iconologia, a compilation of emblems – first published with no illustrations in 1593 and then with plates in 1603 – that rapidly became a key source for artists across Europe.

Abraham Janssens was born in Antwerp in 1567 and trained from 1584-1585 with the Flemish painter Jan Snellinck (1548-1638). He then continued his training in Italy where he was student of Willem van Nieulandt the Elder, and was recorded in 1598 and 1601 in Rome. Janssens returned to Antwerp from his Italian sojourn around 1602. In the years before Rubens returned to Antwerp at the end of 1608, Janssens established his reputation as a professional artist, became the dean of the Guild of Saint Luke, and welcomed countless important commissions. Upon Rubens’ return, an artistic rivalry commenced. Although Rubens would eventually surpass Janssens, major examples such as the present painting confirm his prominent position alongside Rubens throughout his career.

The Renaissance masterworks that Janssens encountered during his Italian travels undoubtedly inspired his artistic output. In the present work, one can detect influences of Michelangelo’s ignudi in the Sistine Chapel.  At the same time, Janssens would have encountered countless examples from classical Antiquity, and the distinct outline of the figure here is emblematic of an interest in the sculptural art form that would become a defining element of his compositions.