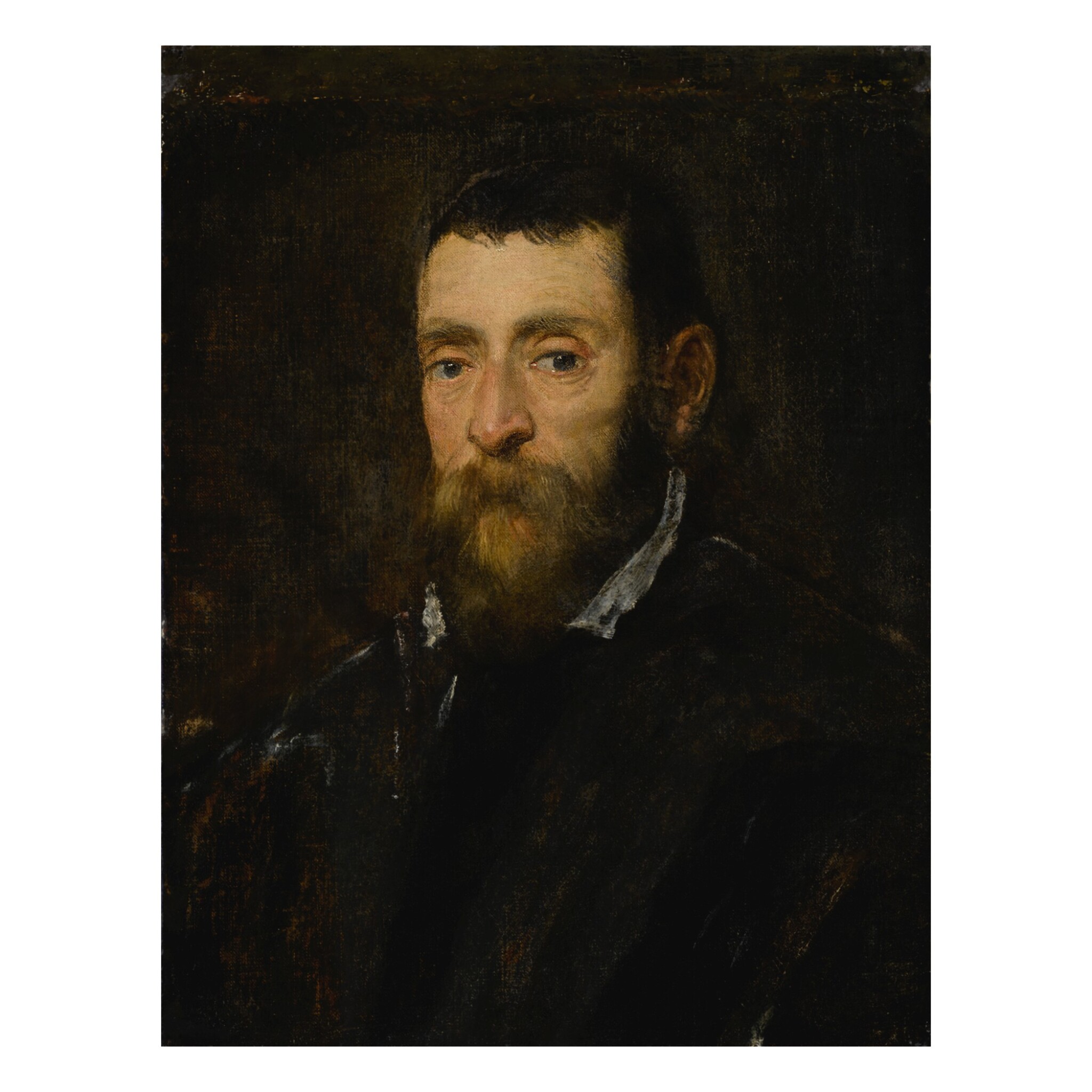 This work is in very good condition. The canvas has an old Italian lining. While the head is fully realized, the darker colors of the background, coat and beard were thinly and quickly painted by the artist. These darker colors have developed some weakness which has been retouched, particularly in the coat. There is a pentiment of what seems to be an earlier position of the collar extending from the center of the chin to the right side of the ear, which has received retouches. There appears to be another retouched pentiment running from the shoulder to the lower center. The retouches are well applied. The varnish could be freshened, but the work should otherwise be hung in its current condition.

﻿﻿﻿﻿﻿﻿﻿﻿﻿﻿﻿﻿﻿In response to your inquiry, we are pleased to provide you with a general report of the condition of the property described above. Since we are not professional conservators or restorers, we urge you to consult with a restorer or conservator of your choice who will be better able to provide a detailed, professional report. Prospective buyers should inspect each lot to satisfy themselves as to condition and must understand that any statement made by Sotheby's is merely a subjective, qualified opinion. Prospective buyers should also refer to any Important Notices regarding this sale, which are printed in the Sale Catalogue.

Of the troika of sublime painters who dominated Venetian art in the 16th Century, it is Tintoretto whose portraits are the most immediate to the modern eye. Compared to the stately and dignified potentates that Titian depicted, or the colorfully dressed Venetian patricians that turned to Veronese, Tintoretto— especially in his smaller, bust-length images— is a much more direct and engaging portraitist. Vasari’s sniffy comment that Tintoretto’s swift technique, performed with “such rapidity, that, when it was thought that he had scarcely begun, he had finished” is simply an observation of exactly the freedom of brushwork that is so admired by a contemporary audience, and that brings the sitters in his canvases so much closer to us today.1This Portrait of a Bearded Man exemplifies exactly this type of portraiture. In it, Tintoretto uses a dark ground on which he captures with a nimble brush the head and shoulders likeness of a soberly dressed man in his early middle age. Except for the face, where the artist uses rapid strokes of pink and ochre to render the sitter’s features and beard, the painting is almost monochromatic. The gentleman’s dress is barely even suggested; subtle tones of black and grey hint at his wide labels and dark sleeves. Slashes of white paint, which still bear the bristle marks of Tintoretto’s brush, form a white linen collar: executed in a moment, it is perfectly understood.

This frankness of the image is reminiscent of a type of bust-length portraiture that Tintoretto produced throughout his entire career, bookended by two of the greatest self-portraits of the Renaissance: his ferocious painting of himself as a young man of 1546/7 (Philadelphia Museum of Art, inv. 1983-190-1), and one painted near the end of his life, circa 1588 (Musée du Louvre, Paris, inv. 572). In the addendum to her earlier catalogue of Tintoretto’s portraits, Paola Rossi considered the present canvas to be datable to about the same time at the earlier of these, close to 1546, by comparison with the small Portrait of a Bearded Man, painted on panel, signed and dated 1546 (Uffizi, Florence, inv. 1387). Such an early dating for the present portrait, however, seems unlikely; the handling of the Philadelphia Self-Portrait and the Uffizi panel are much more controlled, even allowing for the latter’s support, which lends itself to a higher finish. Rather, the present Portrait of a Bearded Man fits better into the artist’s maturity, the 1550-60’s, when his painterly manner had become more established and accepted. Better comparisons would be the similar bust length Portrait of a dark-bearded, blue-eyed man of circa 1555 or the half-length and more finished Portrait of a young red-bearded man in an armchair of 1558/62, both in the Kunsthistorisches Museum, Vienna (inv. 350 and inv. 1539).

As with many of Tintoretto’s portraits, we are not sure of the identity of the sitter. Indeed, there is no extraneous visual information to even suggest his social class; he does not wear the senatorial or procuratorial robes sometimes seen in the artist’s half-length portraits. The painting has in the past been identified as Prince Antonio di Santacroce when it was in the Rangoni Machiavelli collection in Modena. The Santacroce were a noble Roman family with fiefdoms throughout central Italy.2

2. While at present we cannot trace the painting further back than the Rangoni Machiavelli collection in Modena, Luisa, daughter of Antonio di Santacroce, Principe di San Gemini, married Aldobrandino Rangoni Machiavelli in 1869, which may prove to be relevant to the earlier provenance of this painting.