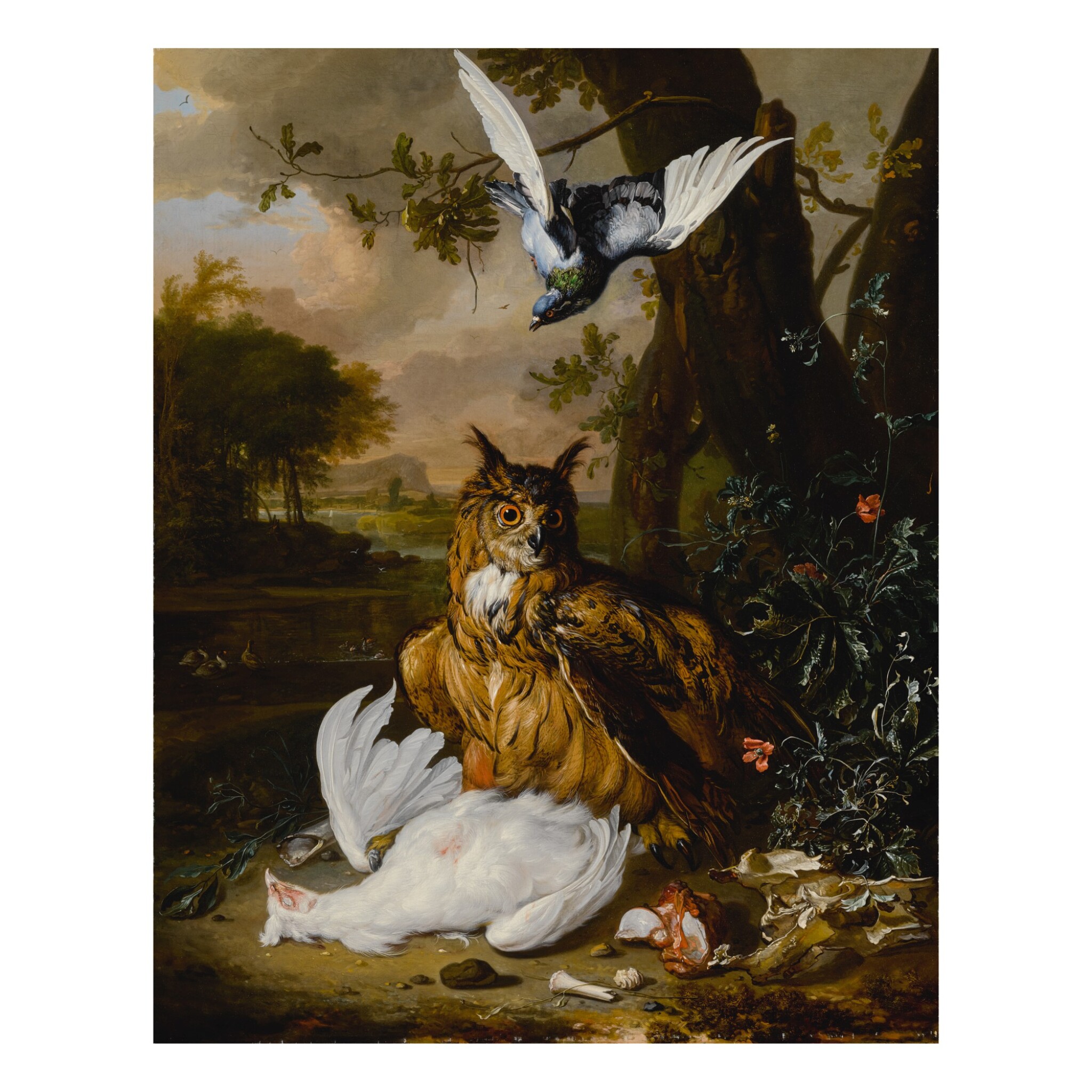 oil on canvas, in an elaborate gilt bronze 18th or 19th century frame

This work is in excellent condition, and the paint layer is particularly well preserved. The canvas has an old lining. The stretcher is old if not original. There is slightly raised cracking in the upper center and upper left, but the paint layer is stable. Under ultraviolet light, there is a group of retouches above the red poppy in the center of the right side. No other retouching is evident. The original paint reads quite strongly in some areas, but this does not correspond to retouching. The work should be hung in its current state.

﻿﻿﻿﻿﻿﻿﻿﻿﻿﻿﻿In response to your inquiry, we are pleased to provide you with a general report of the condition of the property described above. Since we are not professional conservators or restorers, we urge you to consult with a restorer or conservator of your choice who will be better able to provide a detailed, professional report. Prospective buyers should inspect each lot to satisfy themselves as to condition and must understand that any statement made by Sotheby's is merely a subjective, qualified opinion. Prospective buyers should also refer to any Important Notices regarding this sale, which are printed in the Sale Catalogue.

Private collection, France;
By whom sold, Paris, Metayer, 20 November 2015, lot 143;
There acquired by the present owner.

Dirk Valkenburg was born in Amsterdam, where he became a pupil, first of a certain Kuilenburg, then of the portrait- and genre painter Michiel van Musscher (1645-1705), and finally of Jan Weenix (1640-1719), a highly successful painter of animals and still life. In 1696, Valkenburg left Amsterdam to travel. He was very successful, first settling in Augsburg and two years later in Vienna. In or around 1701 he returned to Amsterdam, where he acquired citizenship in March of 1703. In 1706, under contract for the Amsterdam plantation owner Jonas Witsen, he travelled to Surinam in order to draw and to paint scenes on Witsen’s plantations, as well as the exotic birds and plants found there. Due to illness, the painter returned earlier than planned, probably with the autumn fleet of 1707, but a his stay had already resulted in a substantial body of work, particularly drawings. Dirk Valkenburg spent the rest of his life in Amsterdam, quite a few of his paintings date from after this journey. Apart from for still lifes and animal paintings, Dirk Valkenburg painted Surinam landscapes and outdoor genre scenes, for poultry yards and scenes with wild animals, as well as for portraits, all of which are works of very high standard.

Dirk Valkenburg is mainly renowned for his paintings of still lifes of game and of live animals – he often combined the two motifs. The painting shown here borders on the genre of the game piece, but cannot properly be regarded as such. The owl as a motif, however, is often associated with the hunt for small birds. Captured owls were frequently used to attract other birds, luring them into traps and onto glue sticks.1 Owls are night hunters and it is the nature of such small birds to chase them away by day with shrieks and flurried attacks. Paintings representing this hunting method, were quite common in the seventeenth century. In them, the owl is a victim, both of the hunter, who abuses him, and of the smaller birds mocking and threatening him. Here, in contrast and quite exceptionally, the owl, a large Eurasian or European eagle-owl (Bubo-bubo), is shown as a victorious hunter himself. This type of owl is one of the largest of the species and it is widespread, but it cannot be found in the Netherlands. The bird is a night predator and hunts for a wide range of prey species, from birds of various sizes to small mammals and insects. Thus, to find it represented with a chicken as its prey, as in this painting, is not surprising.

Already early on, Dirk Valkenburg proved himself a keen and able follower of his last teacher, Jan Weenix. His ability to mimic Weenix’ style on a very high level resulted in commissions of several large pictures in Weenix’s idiom during his stay in Vienna, among others from the Prince of Liechtenstein. As a result, in 1699, Valkenburg delivered a set of four magnificent paintings to Johann Adam von Liechtenstein. They had been commissioned in the previous year, and have been preserved in the Princely collection to the present day. The artist received the considerable sum of one thousand guilders for these four large canvasses.

While the Liechtenstein paintings clearly demonstrate Valkenburg’s indebtedness to Jan Weenix’s example, they clearly also show how he had attained an individual quality that could compete effortlessly with that of his master. It is no wonder that another sizeable example of his work, in the Statens Museum in Copenhagen, received a false Weenix signature long ago, and was only recognized as a work of Dirk Valkenburg in the last century. The present painting, too, had received a Weenix signature sometime in the past. Valkenburg’s handling is both forceful and highly detailed, and his lighting is strong. The focus in this painting is on the birds in the foreground. The artist deliberately kept the background landscape somewhat vague. Also, there is a stark contrast between the peace and quiet of the landscape, with its restful lake and peaceful ducks in and by a pond, and the vigour of the scene in the foreground.

Dirck Valkenburg rarely dated his works prior to circa 1700. This painting however, is closely related to the series he painted in about 1698 for the Prince of Liechtenstein. The date of those, apart from through their provenance, is confirmed by a very similar painting that the artist actually dated 1698.2 Moreover, the pigeon hovering over the owl is extremely similar to a flying pigeon in one of the Liechtenstein paintings.3 Those similarities combined with the fact that the Eurasian eagle-owl thrives in mountainous areas, makes it highly likely that Valkenburg painted this work during his absence from the Netherlands between 1996 and 1701, likely in Vienna in about 1699. Its elaborate, probably early eighteenth-century frame suggests that the painting was always held in high esteem and must have belonged to a rich collection which, however, unfortunately could thus far not be identified. In type, this image is related to several other upright compositions by Dirk Valkenburg, in particular to a painting of a rather ferocious cat that has launched itself upon a dead chicken and a dead rooster in a park landscape. The measurements of that signed painting is virtually the same and, in terms of composition, it could almost serve as a pendant.