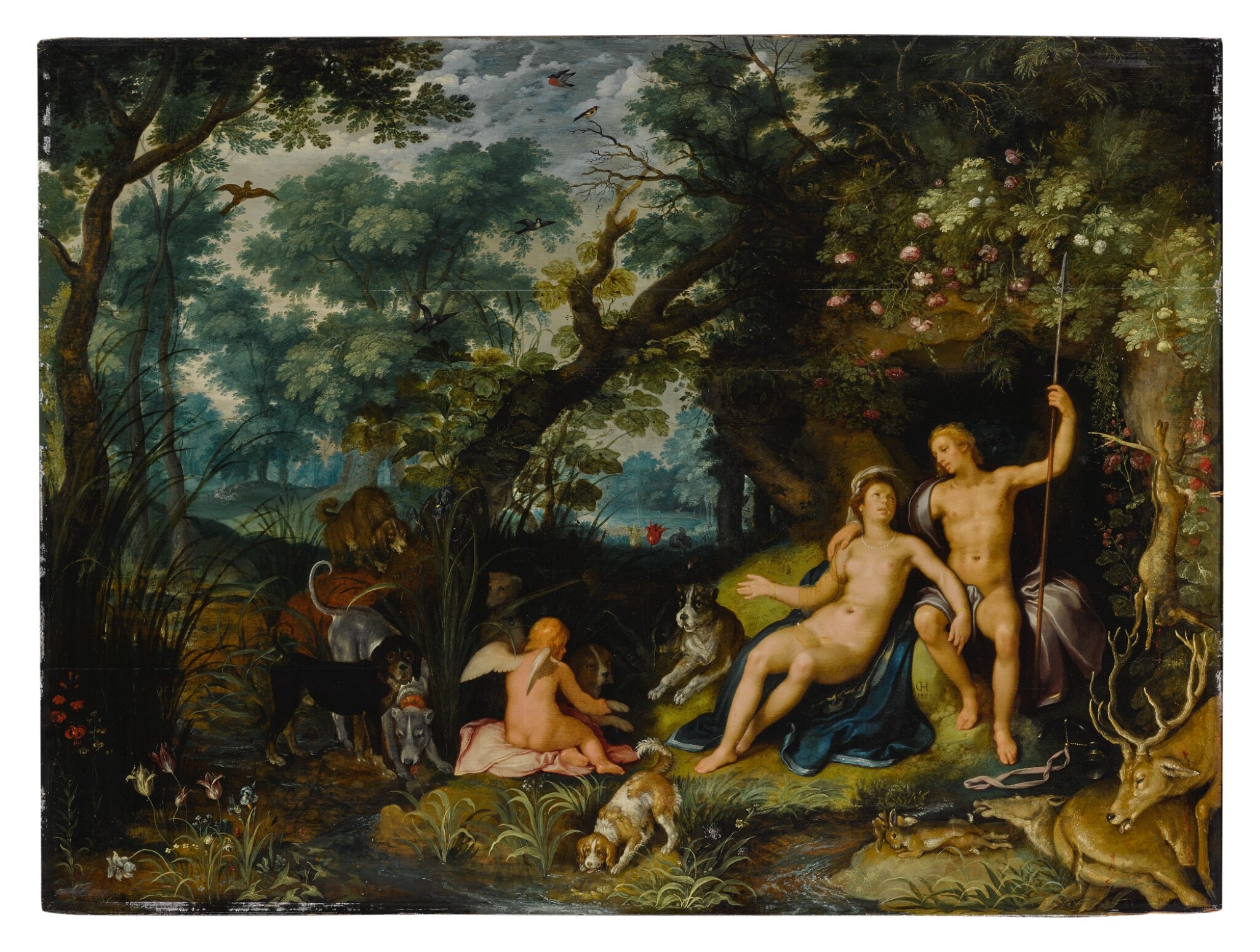 The support consists of two panels: a smaller, thinned panel at center containing the figures has been inset into the larger overall oak panel, which itself consists of 3 planks supported by bars along the joints. An additional smaller bar reinforces an older crack in the top right corner. The recto of the panel presents a beautiful image with colors and details nicely preserved. The smaller panel is only noticeable in raking light and the painting has been seamlessly blended around the smaller scene to integrate it into the larger scene. Under UV inspection, some retouching is visible in the dark shadows and some parts of the flesh tones in the original smaller panel. The dark area of vegetation to the left of the larger dog in the small panel fluoresces as an area of repair. There is also a short slanting scar (about 4cm long) to the lower right of Apollo just above his drapery on the seat. The larger landscape scene shows very little restoration, apart from retouching along the panel joins and some recent strengthening of shadows on the leaves, especially along the left side. The painting presents very well and is ready to hang in its present state. Offered in a simply carved wooden frame.

Collaborative works were not uncommon in early seventeenth-century Netherlandish art and some artists were regular partners, such as Denijs van Alsloot and Hendrick de Clerck, or Jan Brueghel the Elder and Hendrick van Balen, but a work such as this, where one major artist has, some eight years later, taken the work of another major artist and extended it, is exceptional. The result is poetic, with the lithe, smoothly painted figures of Venus and Adonis reclining in a landscape busy with all the naturalistic detail we expect in Savery's best works.

This painting was first conceived by van Haarlem alone as a much smaller panel, measuring 35 x 57 cm. (13 3/4 x 22 3/8 in.), extending from the figure of Cupid in the lower left corner, to Adonis' left hand in the upper right corner. This composition was enlarged considerably by Roelant Savery who extended Adonis' lance, added the cave and woods behind the couple and the deer in the lower left corner, as well as the hunting dogs and the extensive landscape.

The date of the original panel is difficult to discern, but the third figure – the least legible – most probably reads as a '1'. A date of 1610 is also loosely supported by the fact that Venus' pose here is almost identical to that of the figure of the goddess in Cornelis' Venus and Mars, in the National Museum, Warsaw, which is dated 1609.2

The extension of the panel is most likely to have occurred in 1618, when Savery worked briefly in Haarlem before moving to Utrecht later that year. Savery frequently collaborated with other artists to people his landscapes, but only one other example of a partnership with Cornelis is known: The Fall of Man, signed by Savery and dated 1618.3

1. According to information from Jan Briels, a painting described as 'Venus and Adonis', with figures by Cornelis and landscape by Savery is recorded in an Amsterdam inventory of 1633; see K.J. Müllenmeister, in Roelant Savery in seiner Zeit (1576–1639), exhibition catalogue, Cologne 1985, p. 36 (incorrectly identified with cat. no. 90 in that catalogue).