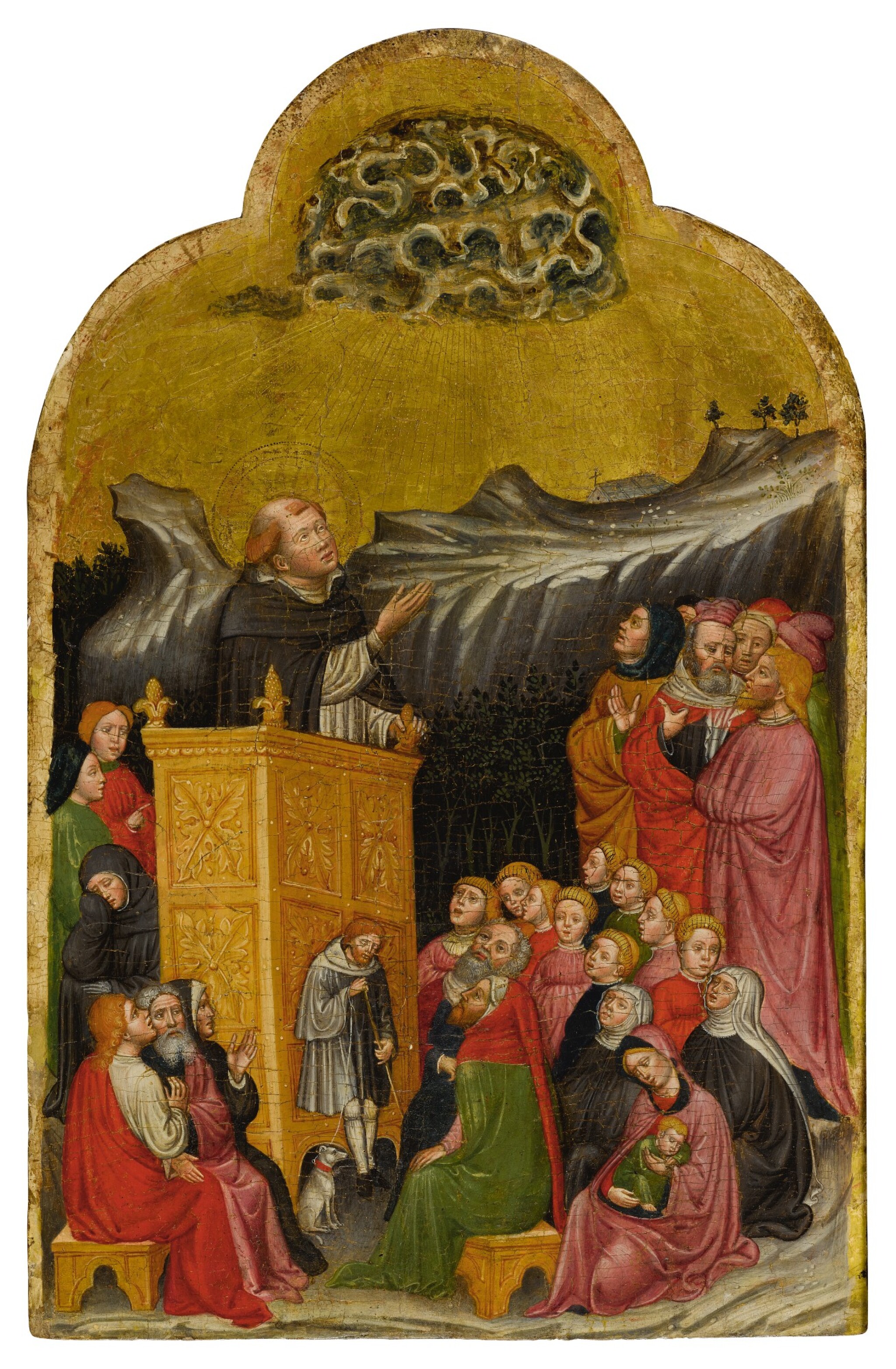 tempera and gold on panel

The following condition report has been provided by Matthew Hayes of the Pietro Edwards Society for Art Conservation 336 West 37th Street, Suite 1580, New York, NY 10018, 212-457-8956, mh@edwards-society.com, an independent restorer who is not an employee of Sotheby's.

The gilding is in generally good condition though with some abrasion, mostly at the panel edges and the high points of the craquelure. The paint is slightly lifted and detached from the panel along a crack at the proper right, extending through the figure of the preaching saint, with small losses visible in the podium; this can be easily secured. The paint film is otherwise in comparably good state, especially in opaque passages. There is some wear to the raised edges of the horizontal craquelure and to the glazes. Very little retouching is evident, mostly at the cracks and the lower edge. The unusual cloud appears to be original. An unpainted border indicates the original edges of the composition. The varnish is clear and even.

The panel has been thinned and cradled but preserves its original dimensions. It has a slight convex curvature. There is evidence of past worm activity, visible as worm channels on the panel reverse and occasional wormholes on the picture surface. Modern wood inserts have been inserted, vertically following the grain, to repair cracks in the panel. The crack at the proper right, below the point of the cusping, appears slightly open.

The later frame is in fairly good condition, with some cracks, mechanical damage, wear to the gilding, and worm damage—some of this perhaps added as patination.

The narrative recorded in this vivid and intriguing panel comes from the life of the Veronese saint, Peter Martyr (d. 1252).1  He is shown here before a rocky landscape atop a pulpit gesturing upwards towards the sky as a group of onlookers appear below. A crowd has gathered to observe a dispute between a heretic and the Saint. The heretic challenged Peter to prove his sanctity by ordering clouds to fill the sky and block the sun's rays, in turn providing relief from the unbearable midday heat. In this scene, the artist has captured the moment the clouds appeared in front of the sun to the dismay of the heretic, who is likely the man at the base of the pulpit with a downcast expression and a dog.

The Master of Roncaiette was active in the Veneto at the end of the 14th and early 15th centuries, primarily in Verona and Padua. This anonymous master was first identified in 1947 by Roberto Longhi who named him for a large altarpiece in the Church of San Fidenzio in Roncaiette, just outside of Padua. Another notable work by this artist is a Madonna and Child in the Museo Civico in Padua (inv. no. 1151). The master's style followed in the tradition established by Altichiero, a gothic follower of Giotto who laid the groundwork of the Veronese school. He also came under the direct influence of Martino da Verona, and later under Gentile da Fabriano and Jacobello da Fiore, two artists who championed the late gothic style.  Mauro Lucco has more recently identified this master as Federico Tedesco, an artist active in Padua from about 1395 - 14242 and whose signed Nativity from 1420 is today in the Pinacoteca Civica in Forlì.3

The Master of Roncaiette mainly produced paintings of a conventional religious nature. As such, the present work, filled with much more of an elaborate narrative, can be singled out within his oeuvre. The subject and composition of the present work suggests that it may have once functioned as part of an important dossal, or altarpiece, at the center of which would have been Saint Peter Martyr. Episodes from his life would have been visible to the right and left in two or more registers. The altarpiece was likely painted for Saint Peter Martyr's Dominican order, but because of this artist's wide veneration throughout the Veneto during this period, it is difficult to determine its earliest provenance. It is possible that it once formed part of an altarpiece devoted to Saint Peter Martyr in the now destroyed Church of Saint Augustine in Padua or perhaps part of an altarpiece in Padua's Oratory of Saint Peter Martyr.

According to Daniele Benati, the present work was probably completed in the Veneto and likely dates to circa 1410-1420, which is this master's most accomplished period. Mauro Lucco, to whom we are grateful, has also endorsed the present attribution and has suggested an alternative date of 1404-1410 based on the costumes of the figures.