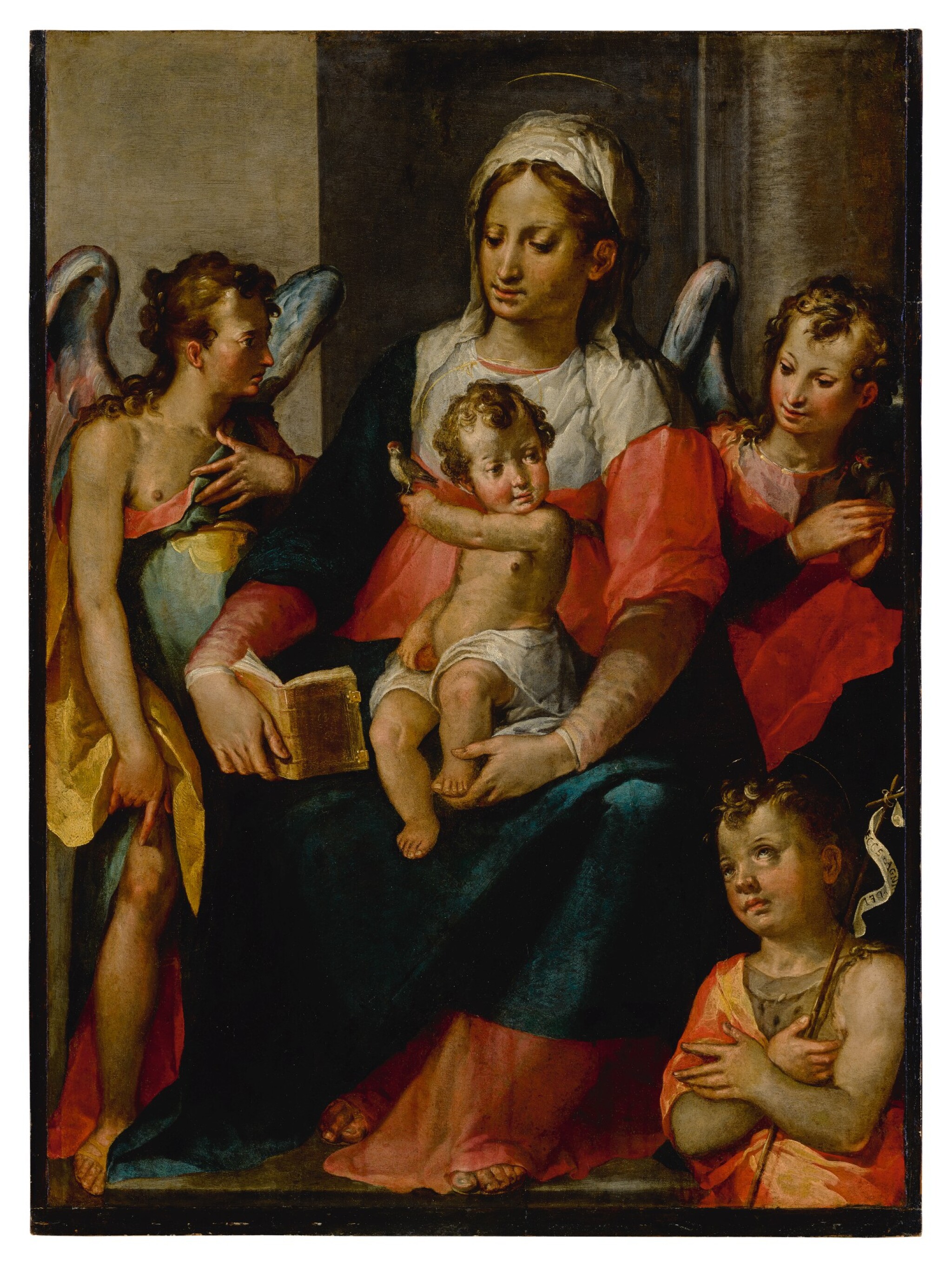 oil on canvas, unlined, possibly in the original frame

The canvas appears to be lined and it is stable on its stretcher. There is a thin and modern sheet of fabric that is not adhered to the reverse, but serves as somewhat of a protective backing. The large canvas presents a strong image overall, and some of the colors remain vibrant despite the surface being somewhat dirty. There is an old repaired thin vertical break in the canvas that runs through the standing angel at right, and another smaller repaired and retouched break through the arm of the angel at left. These have been stabilized and well-restored. There are two spots of retouched repairs in the upper left background. Under UV: there is scattered retouching here and there throughout, some more finely applied and some more broadly applied, though largely concentrated in the darks and shadows, such as in the shadows of the angel at upper left and in the folds of the Virgin's blue mantle. There is a more broadly applied area of retouching to the right of the head of Saint John the Baptist, in the lower leg of the Christ Child, and a spot below the book. Offered in a gilt frame with carved decorative floral details

Marco Ciampolini has recently given this painting to the Pittore di Pontignano, an artist that he named after a set of frescoes in San Pietro a Pontignano, a church just outside of Siena.1 This artist was particularly drawn to the passionate modes and styles of some of the leading artists in Counter-Reformation Siena, including Alessandro Casolani (1552-1606), Francesco Vanni (1563-1610), and Ventura Salimbeni (1568-1613) as well as Francesco Bartalini and Giovan Paolo Pisani (1574-1637).2 The Pittore di Pontignano, according to Ciampolini, “absorbed the emotionality of Casolani, the velvety, painterly brio of Vanni, as well as the tender humanity of Ventura Salimbeni,” and his oeuvre is characterized by brilliant color, a notably skilled brush, and elegant compositions.3 Other works Ciampolini has assigned to this hand include a Saint Sebastian in the church of SS. Pietro e Paolo in Roccalbegna and a number of canvases in the Chigi-Saraceni collection in Siena, including a Holy Family with Saint John the Baptist and Saint Catherine that shares close visual affinities to the present example.4Ciampolini has introduced the possibility that Pittori di Pontignano, a moniker for an anonymous hand, may in fact be Agostino d’Anselmo Carosi, an artist linked to the workshop of Casolani. Carosi was active in Siena during the first quarter of the 17th century. In 1602, a payment was made to Carosi by the Compagnia of San Antonio Abate for a now lost altarpiece of the Madonna and Child with Saints. Carosi is also recorded as purchasing a farm near Siena from Francesco Bartolini in 1603, the same farm that would be sold after Carosi’s death in 1627 to Rutilo Manetti, a prominent artist of the Sienese Baroque.

On the original strainer of this painting is an inscription identifying the author as Giovanni Francesco Rustici (1475-1554), a Florentine sculptor. This erroneous inscription likely arose from a confusion between this sculptor and the Rustici family of painters, active in Siena from the end of the 16th century to the early 17th century.

We are grateful to Marco Ciampolini for endorsing the present attribution. His expertise forms the basis of this cataloguing entry.