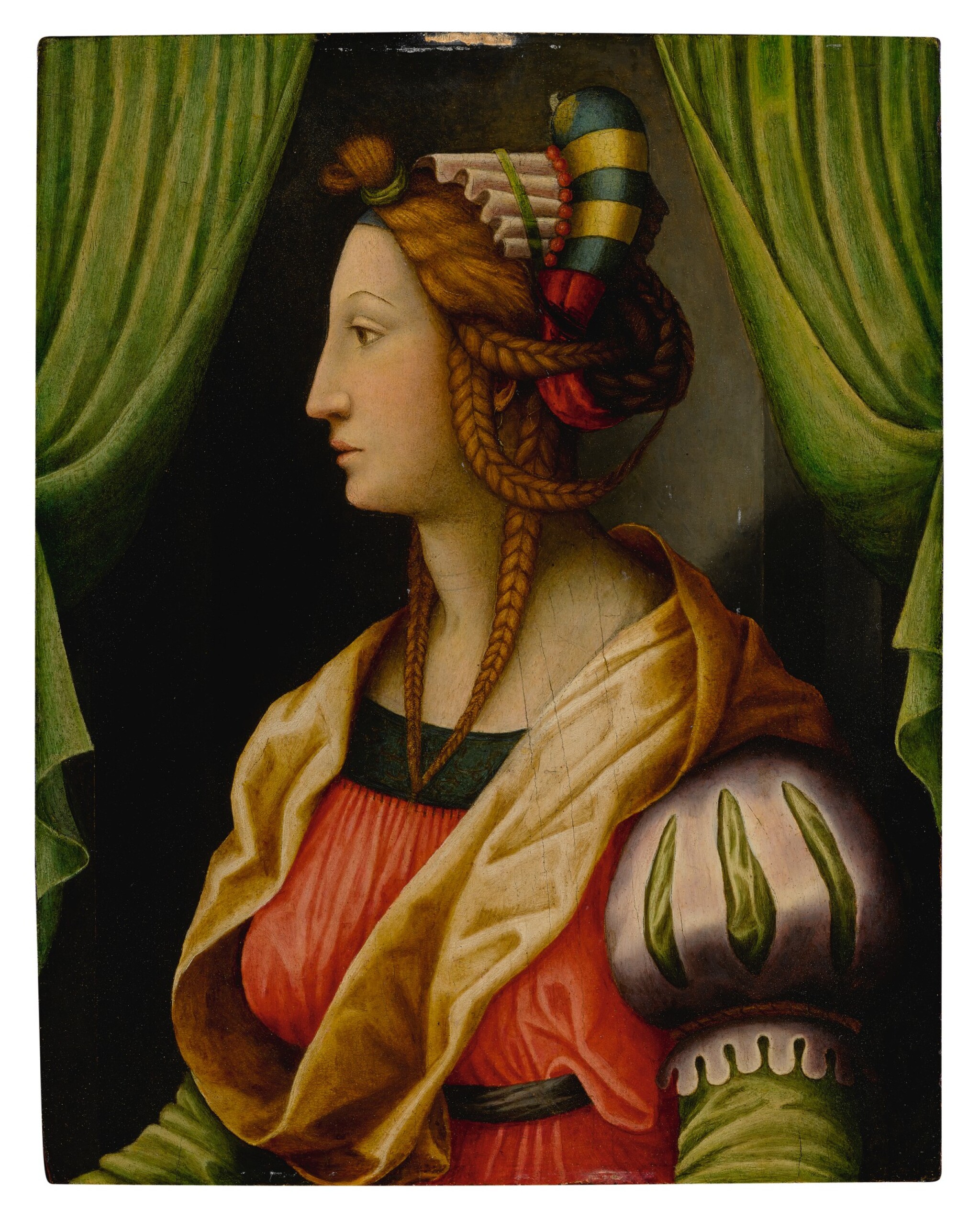 The panel is stable with a slight convex bow and consists of one board with 3 thicker horizontal boards adhered to the back for support. The portrait image reads very well with its bright colors and gilt details through a glossy varnish. A few hairline cracks in the paint layer are visible through the figure's neck and chest but are stable. The paint surface is irregular at the top center above her hair, possibly due to varnish. Under UV inspection, small spots of cosmetic retouching are visible throughout the clothing and background, and the varnish fluoresces unevenly throughout the hair, but no retouching is currently visible under UV to the face or neck of the figure. The painting can hang in its present state. Offered in a decoratively carved giltwood frame.

This elegant depiction of a woman in profile, her hair elaborately dressed in heavy braids and a pleated headdress, exemplifies a genre of painting popular in Florence in the second quarter of the 16th Century, that of the Testa Ideale, or “idealized head.” These images were meant not to represent specific sitters or historical figures, per se, but meant to be emblematic of exotic, female beauty. The greatest proponent of these images was no less a figure than Michelangelo, who famously drew a number of such Teste. Indeed, the present painting is similar in tone to a black chalk drawing by the great master in the British Museum, which shows a woman in strong profile, her hair with a high forelock and heavy braid of hair (inv. 1895,0915.493). That drawing can be dated to 1525-28, suggesting a slightly later date, probably to the 1530s, for the present panel.

Antonio di Donnino del Mazziere was the scion of a family of artists. Both his father Donnino and his uncle Agnolo del Mazziere were painters; indeed, Agnolo was one of the group of artists called to Rome in 1507-8 by Michelangelo as a consultant for the Sistine Chapel. His father was the head of the brothers’ workshop, and it seems likely that the young Antonio would have received early training there, although Vasari noted him as a pupil of Franciabigio.1 Previously attributed to Bacchiacca, the convincing attribution to Antonio del Mazziere was suggested based on photographs by Carlo Falciani, to whom we are grateful.