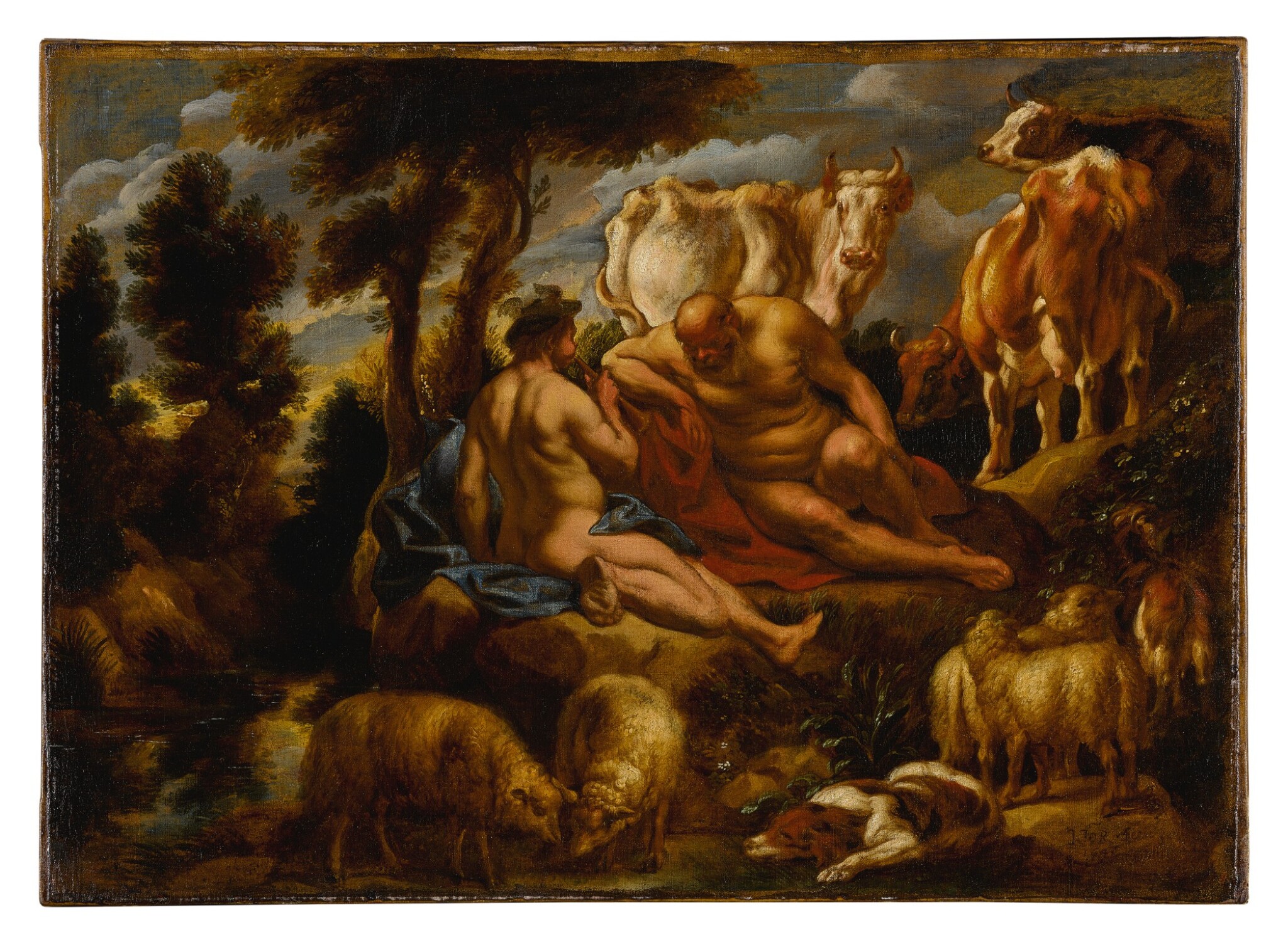 Relined, with a glue lining. The painting is under a dirty, uneven matte varnish. The painting, nevertheless, reads fairly well, and the artist's masterful technique, which is quite fluid and thinly painted on a buff ground in parts, is still very evident. The painting has been slightly pressed in the relining. Across the top of the canvas there is a band of raw canvas, left unpainted by the painting. Under UV: there is very little evident under uv. A few small specks of restoration here and there, but not many touches. There is an old repaired damage to the left of Mercury's left elbow in the blue drapery at middle left, well addressed and not distracting. Otherwise not much is evident. A intelligent cleaning and restoration should transform this picture. Offered in a gilt wood frame carved with foliate decoration.

The story of the death of the shepherd Argus at the hands of the god Mercury is recounted by Ovid in his Metamorphoses (I, 568-721), and was a favorite theme of Jordaens, who returned to it on several occasions throughout his career. Argus had been appointed as guard to Io, princess of Argos, a lover of Jupiter who had been turned into a white heifer by Jupiter's jealous wife Juno. Mercury was sent by Jupiter to kill Argus, which he did after first lulling him to sleep with music. Mercury, his magic flute in hand playing hypnotic music, is poised to kill Argus, who has fatally relaxed his guard and whose dog also sleeps beside him. The fascination of the subject for the seventeenth century viewer is probably best expounded by Karel van Mander, who, writing at length in his Wtlegghingh op den Metamorphosis (Commentary on the Metamorphoses of Ovid) lectured on how it warned of the necessity of never relaxing one's vigilance, lest we succumb to the vices such as luxury which otherwise may govern us.

Jordaen's first fully developed treatment of this scene is a canvas now in the Musée des Beaux-Arts, Lyon. It dates from early the 1620s and is smaller, almost square in format and shows only the central part of the scene.  There are two known replicas, one in the National Gallery of Victoria, datable to circa 1635-40 and the other in the Musée de l'Art Wallon, Liege. In the mid-1640s Jordaens returned to the theme, but in a more expansive form, extending the landscape to provide more breathing room for the main actors. That composition is known in two versions, the work formerly with Alain Tarica and a second, now in a private collection in Malmö, which includes two additional cows in the left middle ground.