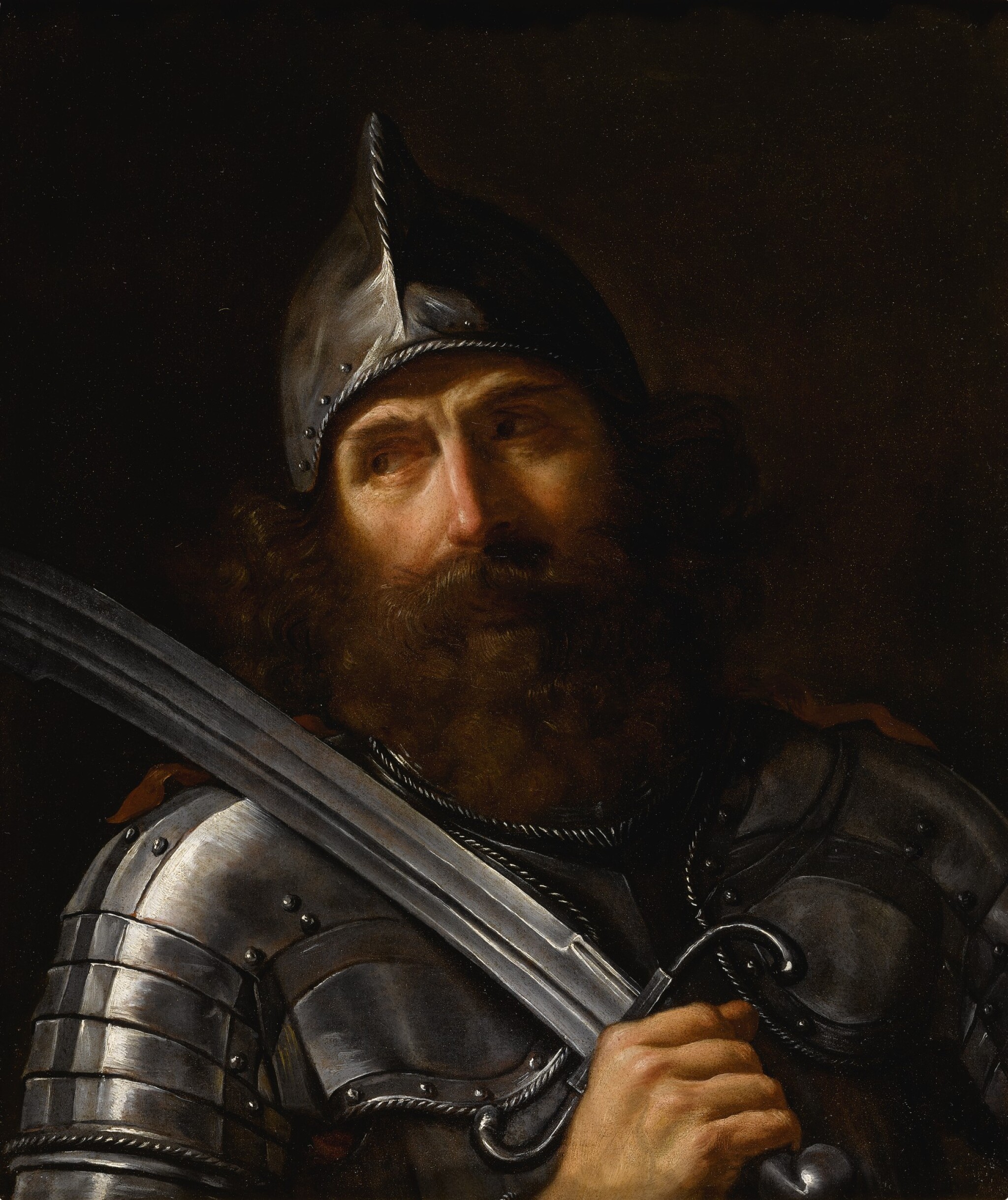 This work has recently been lined. The retouches and varnish are well applied.

Under ultraviolet light, one can see a 3-inch line of restoration to a break in the canvas, running through the blade of the sword by the shoulder on the left. In the lower left corner, there is a 2-inch line of horizontal retouching that addresses a scratch or thin break. There is a small group of retouches in the lower right corner. There is a T-shaped restoration to the left of the head and above the blade, running 4 inches horizontally by 1 inch vertically. There are a few small retouches in the beard, but not in the face or helmet. In the lower right, there is a restoration running about 4 inches addressing a break in the canvas. Slight thinness at the top of the armor to the right of the beard has also been retouched. The delicate paint layer in the beard is naturally quite thin.

Baldassare Torresani, Prior of San Giuseppe, Bologna, by whom commissioned and by whom paid for in March 1636 (see note);
In a family collection from the late 19th Century, until acquired by the present owner.

By the early 1630s, Guercino had established a thriving practice in his hometown of Cento, producing a wide array of paintings for patrons throughout Emilia and beyond. In addition to large scale altarpieces for ecclesiastical use and grand gallery pictures for aristocratic collections, the artist painted intimate canvases for domestic settings, including still lifes, Madonnas and various saints, as well as mythological and secular subjects. This bust-length image of a warrior is an example of this type of painting, favored by the cultivated class of patrons who turned to Guercino to fulfill their commissions.

The soft brushwork and composition suggest that this painting should be dated to the mid-1630s. It depicts a bearded man in armor, who rests his sword across his shoulder. His determined aspect confirms that he is a representation of Mars. Guercino produced a number of related images of the warrior god from the late 1620s onward. A drawing in the Royal Collection, Windsor (inv. RCIN 902707) depicts a similar figure, but with a plumed helmet and his sword raised.1  This drawing likely relates to a half length figure of Mars at Tatton Park, Cheshire, which has been dated to shortly thereafter. The Tatton Park Mars is echoed by an analogous figure of the deity in the Venus, Mars and Cupid, painted a few years later in 1633 on the commission of Francesco I d’Este, Duke of Modena (Galleria Estense, Modena).

Given the likely dating of the present Mars to the mid-1630s on stylistic grounds, it seems the most likely candidate for a painting recorded for 1636 in Guercino’s account book (Libro dei Conti). In an entry for the 19th of March, 1636, a payment for two paintings one of Mars and one of Ceres is noted:

While no head of the goddess Ceres is known, other bust length depictions of warriors exist which have been connected to this commission. Nicholas Turner had previously proposed that a canvas of a bearded warrior in a private collection might have been the Torresani Mars, although he has since rejected that notion, on stylistic grounds.3 In his recent catalogue raisonné of the artist’s works, he seems to have accepted Massimo Pulini’s suggestion a painting formerly in the Koelikker collection in Milan was a more likely candidate. That painting, however, depicts a younger, clean shaven warrior, and does not correspond to the other depictions of Mars by Guercino, and could thus can be excluded on iconographic grounds alone. However, with the subsequent reappearance and restoration of this picture, Turner considers it a better fit for the Torresani commission of 1636. While the Torresani Ceres remains elusive, it has been suggested that a drawing in red chalk of the goddess in the Royal Collection, Windsor may be visual evidence of the composition; the sheet is a counterproof and faces to the right, thus would have made in its original form a complimentary pair to this Mars.4 The pairing itself is somewhat odd iconographically, as Venus might have been a better mate. However, Ceres as goddess of agricultural fertility was often associated with the benefits of Peace, and thus a perfect balance to Mars’ role as the patron of War.

Baldassare Torresani, was the Prior of the important church of San Giuseppe, which housed the Servite order in Bologna. He was a frequent patron of Guercino, ordering a number of works throughout the 1630s, including a number of still lifes and other genres, including a “Testa di Bacco” for which he paid 46 scudi on the 31 March, 1635.

We are grateful to Nicolas Turner who has examined the painting first hand, and confirms the authorship of Guercino. We are also grateful to Professor David Stone who, on the basis of a photograph of the recently cleaned painting, accepts the attribution to Guercino and believes that the picture may, in fact, be the one paid for in March 1636 (see note above).

3. See N. Turner, The Paintings of Guercino: A Revised and Expanded Catalogue Raisonné, 2017, p. 609, cat. no. 318.II. The picture is said to depict the warrior Argantes from Tasso, and clearly relies on the same model or type as the present canvas, and the other Mars figures. Turner dates that painting to a decade later, circa 1645.