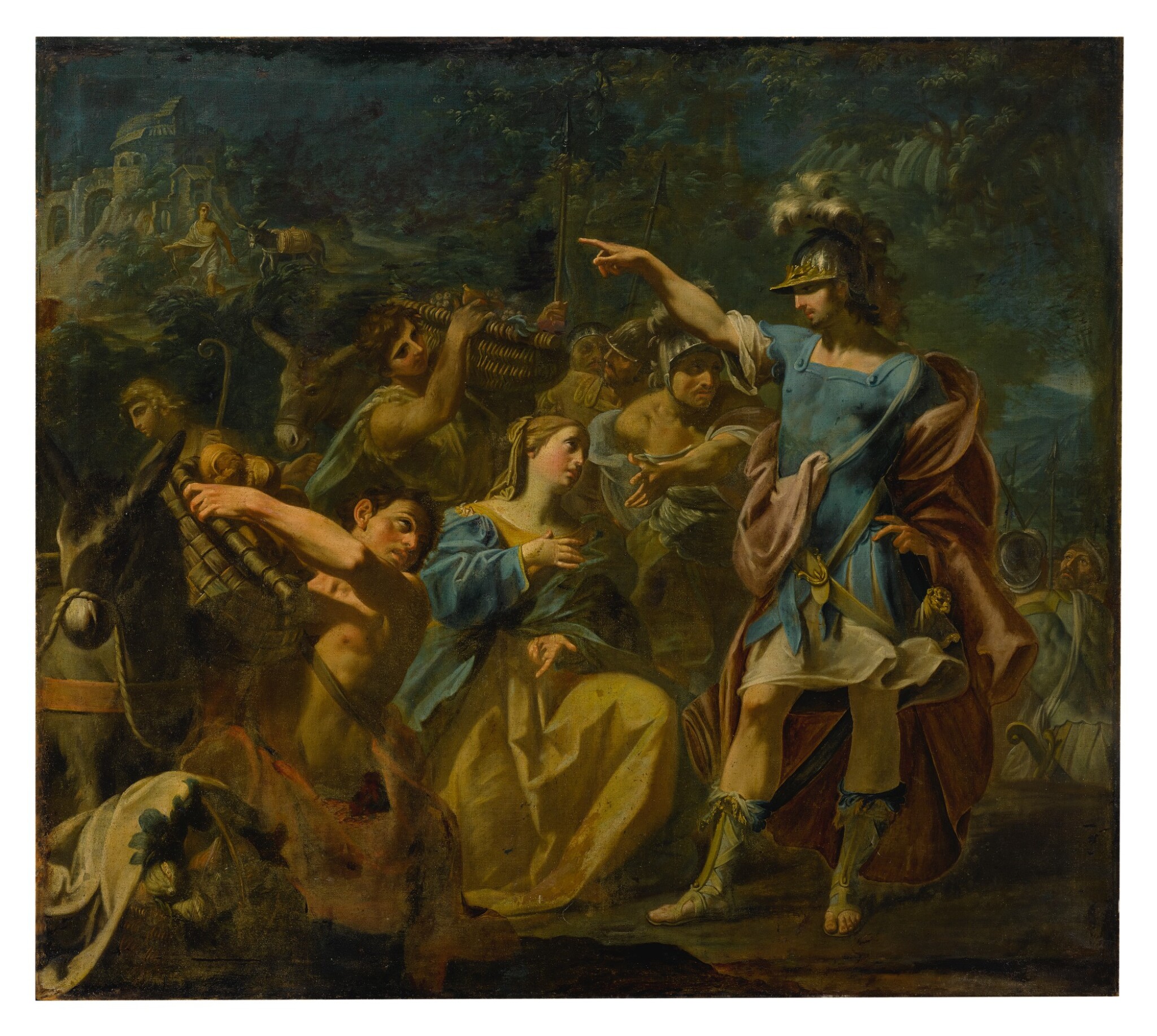 The canvas is unlined and stable on it stretcher. Frame abrasion and later (now discolored) retouching as well as some buckling is present at all four corners but is not distracting. The impressive composition reads relatively well under dirty varnish. A few scratches and areas of abrasion and thinning are visible to the naked eye but are not distracting, such as around Abigail's skirt and at lower left. Under UV inspection, the aforementioned areas of repair are visible, as well as a few larger areas of retouching in the background at lower left, upper left, and upper right, but the faces and figures are largely free from retouching. As this canvas is unlined and has had little restoration work, we recommend contacting an outside restorer for advice on a cleaning and treatment plan. Offered in a simply carved giltwood frame.

Collection of Dr. Pedro Martino (1876 - 1929), Uruguay (according to a label on the reverse dated 30 June 1933), and by inheritance to his widow;
Art market, Montevideo, Uruguay;
Where acquired.

This impressive, unlined, and previously unknown canvas depicts the Meeting of David and Abigail as told in the Book of Samuel. While exiled in the wilderness of Judah, David asked the wealthy farmer Nabal, Abigail’s wife, for provisions, and Nabal refused, leading David to send his army to retaliate. Abigail took matters into her own hands and brought provisions on horseback to intercept David and pleaded with him for mercy. After the meeting, Nabal died and David interpreted it as a sign from God; he asked Abigail to marry him and she became his second wife.

As the present lot derives influence from Bolognese, Emilian, and Venetian sources, it is most probably the work of Giovanni Gioseffo dal Sole, who worked primarily in Bologna but by the 1680s had a strong Venetian influence from his teacher Lorenzo Passinelli as well as from his time in Verona in the employ of Count Giusti. Dal Sole participated in the decoration of the Aeneid Gallery of the Palazzo Buonaccorsi in Macerata alongside the leading artists of his generation, contributing a canvas depicting Andromache weeping before Aeneas.

An alternative attribution to Giuseppe Carlo Pedretti has been proposed by Marco Tanzi and Michele Danieli.