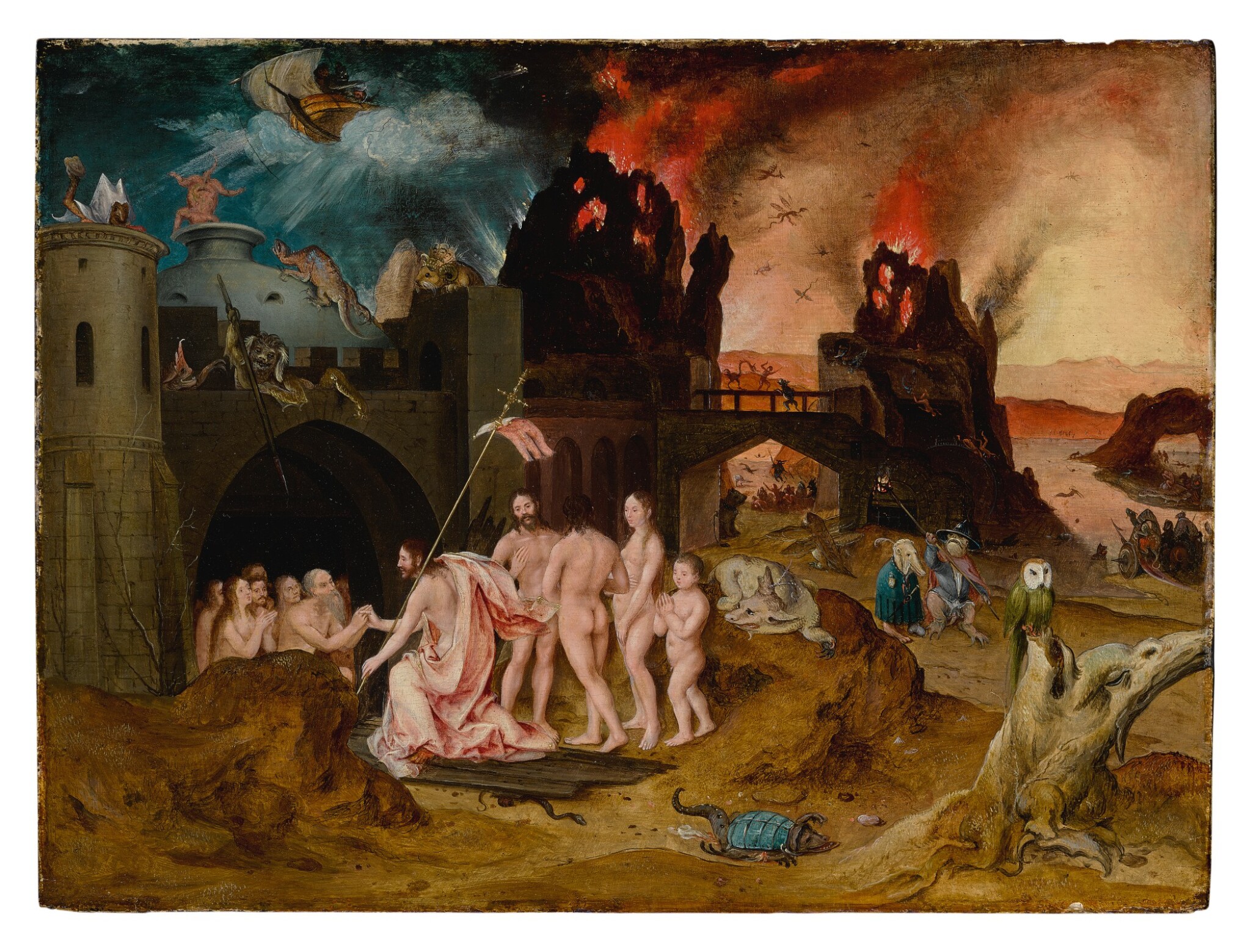 The panel is comprised of one horizontal board that is faintly beveled on all four edges. The panel is uncradled, stable, and has a very slight convex bow. This painting is in good condition overall, with a good retention of crisp detail and a vibrant coloration throughout, and it can certainly hang in its present condition. The varnish appears to have very slightly discolored in some areas. Some minute losses are visible at the extreme upper edge, though these are not distracting and are covered by the frame. Inspection under UV reveals a thick and somewhat streaky varnish that fluoresces unevenly and impedes some inspection. Some very fine and scattered strokes of retouching are visible in the figures at center, the most concentrated in the bearded man, but these are all well-applied and largely cosmetic in nature. Some additional scattered and very small strokes of retouching are visible only here and there, for example in the monster above the archway to Purgatory and in the upper right sky. Some recent retouching is visible at the extreme edges, possibly to address old frame abrasion, and a spot of retouching is visible near the lower part of the tower at left. There is a spot of drippy varnish that fluoresces unevenly at the upper edge. Some additional slightly discolored retouching is visible to the naked eye in scattered parts of the lower foreground, but this does not fluoresce strongly under black light. Offered in a carved wooden frame with some painted decorative details.

With Fritz Steinmeyer, Lucerne (according to an annotation on a photograph in the Friedländer archive);
With Galerie Sanct Lucas, Vienna, by 1935;
Private collection, Geneva;
Anonymous sale, Geneva, Galerie George Moos, 6 May 1950, lot 26 (as Herri Met de Bles);
De Toledo collection, Geneva;
With Derek Johns Ltd., London (as Peter Huys);
From whom acquired, 2015.

Infernal subjects such as Christ in Limbo, an episode described in the apocryphal Gospel of Nicodemus, were vividly explored by the Flemish painter Hieronymous Bosch (1453 – 1516). Such themes lent themselves well to his intriguing compositions as well as his diabolical and outlandish creatures, all of which would serve as an endless source of inspiration for generations of artists to follow, including the artist of the present panel. Early sources confirm that Bosch explored a subject similar to this in at least four paintings, all now lost, two of which were in the collection of King Philip II of Spain.1

This colorful and detailed panel shares visual affinities in both style and composition with two of Bosch’s most well-known followers, Pieter Huys (circa 1500 -1560) and Jan Mandijn (1519-1584).2 It illustrates the moment that Christ, having torn asunder the gates of hell, delivers the redeemed from purgatory. A brightly illuminated Christ stands at center, wearing a red mantle and holding a victory banner, surrounded by the similarly illuminated souls that he will bring with him to Heaven. Filling the composition around these figures are a variety of odd and somewhat curious creatures, from the crowned mouse peering from the castle tower, to the monsters flying the boat through the sky, to the armored critter crawling in the foreground.

2. This painting was acquired as by Pieter Huys, and it is listed on the RKD as an artist in the circle of Jan Mandyn. https://rkd.nl/explore/images/51922